One gets tired of tech toys, particularly when they break.

This has been a bad week for technology for me.   It seems everything I own has broken or needs upgrading.   We just got back from a two-month vacation, and one of the front axle CV joint boots has torn open on the X5.  This is not unexpected, with an all-wheel-drive vehicle, as the front CV joints tend to turn more sharply than the rears (which do not turn much at all) and thus stress the rubber on the boots.

The originals were replaced at 30,000 miles, under warranty.  Now it is 130,000 miles, and time to do it again.   The punchline is that a new CV joint boot kit costs about $30 or so, while a whole new axle assembly (shown above) costs only about $70.   Since you have to remove the axle assembly to replace the CV joint boot, you might as well replace the whole axle, for the extra $40 involved.  The old CV joints may be worn (likely to be worn) after 130,000 miles, and moreover, now that dirt has gotten into them (from the torn boot) you might as well replace the whole deal anyway.

But of course, to remove the axles assemblies, you have to disconnect the lower ball joint and control arm, which always runs the risk of damaging the ball joint.    You also have to remove the strut assembly and the tie rod ends.   And since you are basically taking apart the entire front end of the car, why not replace these parts, which are also likely to be worn?    And the parts are surprisingly cheap - the entire package for about $350. 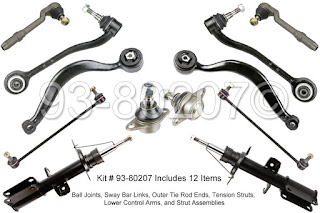 When replacing front end parts, you might as well do all of them.  The parts are cheap, and the labor is expensive.

So I ordered the whole deal and have yet another fun front-end overhaul project to work on.   This should take a week.   I'm getting too old for this shit.

But I predicted this, in an earlier posting.   All-wheel-drive is fun and all, but it adds complexity to a vehicle, and thus increases the likelihood of repair down the road.   This same vehicle, in rear-wheel-drive format, would be easier to maintain and get better gas mileage.

And of course, there are computers that need fixing.    My neighbors gave me their old computer to fix.  They loaded it up so much with viruses that it stopped working.   So I am doing the usual bit, running Malwarebytes, Spybot, Windows Defender, FixVundo, tdsskiller, and the like.   I find 39 problems on the machine, from viruses to rootkit exploits, to Trojan loaders.   It might be easier to just re-install Windows entirely.

They got so frustrated with the computer they went out and bought a new one.   And of course, that one was rife with trojan loaders as well.   After cleaning out that machine, I updated windows, Firefox, Explorer, all the plug-ins, as well as updated Java (while uninstalling the older vulnerable versions, which is important), Acrobat, Flash Player, and the like.   Of course, I had to uninstall all the bogus toolbars, such as "Ask" as well as the crap-ware that came bundled with machine (about five programs in all, each popping up that their trial periods had elapsed and giving dire warnings as to what would happen if they did not cough up $49.95 for the "full" version of hard disc accelerator, or virus scanner or whatever).

In fact, the computer was so clogged with various programs trying to update all at once (and fighting for bandwidth with all the adware and trojans) as well as pop-ups for crapware, that it barely ran.   On the first go-around, it crashed twice.  With each successive iteration of cleaning and removal, it ran faster and faster.   After three scans with Spybot as well as Malwarebytes, it finally ran clean.   But it only took about four hours.

My battered old laptop still works - although its PCMCIA (remember THOSE?) external network card finally crapped out.  Why I didn't buy the internal card when I bought the thing a decade ago, I don't know.  But you can find them all day on eBay for $4.95 including shipping.... 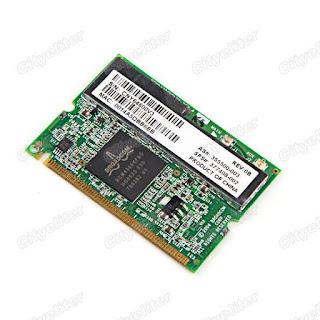 At least this promises to be a plug-and-play proposition.

But it is just one more piece of technology that needs repair.  And the more technology you own, the more needs repairing over time - or just replacing, which gets expensive.

Technology is fun and all, but it can get tiresome - and expensive - very quickly.    And the more technology you own, the worse it gets.   Yea, it can be fun and all, when you are young, and you have a new car, a new cell phone, and a new computer and a new television set - and a mountain of consumer debt to pay for it all.

But five years later, the new car is scratched and worn and needs a new set of tires.  The electronics are obsolete and worn - and possibly broken or breaking.   And you just got done making payments on it all.   What do you do?  Throw everything away and start over?

For many people, this is the answer.   They trade-in and trade-up every few years, hoping to discard old technology and equipment before it becomes obsolete and "unreliable".   But this means they will end up having a perpetual stream of payments on junk - for the rest of their lives.

As Americans, we consume and discard an enormous amount of equipment every year.   I'll bet you still have a 17" monitor floating around your house somewhere, right?  You can't throw it away - no one will take it.  And it is worth nothing - no one will buy it, either.  It is techno-detrius, at this point.

Being able to fix things is one alternative.   The repair job on the BMW will cost me about $500 in parts and a few days of my time.   A mechanic would likely charge thousands of dollars for the same service. But few people possess the skills to do their own repairs.   And often, even when repaired, an old piece of technology is ready to break again, within a few months or years.   There reaches an end-game with equipment, as I have noted previously.

And one gets tired of fixing things.  The more stuff you own, there more there is to fix.  And at one point in my life - about three years ago - I realized I owned twelve toilets, eleven refrigerators (!), six cars, two boats, a tractor, seven air conditioners, seven computers, five microwaves, and numerous small appliances and small internal-combustion powered tools and the like.   When they all start to get old, well, they all seem to break at once.   And there is more to life than being a handyman.

But like I said, most people can't fix their own things, and even if they could, it becomes an onerous chore when you own a lot of "stuff".

So that leaves the only other realistic alternative:  Own Less Stuff.   And in the last three years, I've managed to do that, downsizing to "only" two cars, six refrigerators, four toilets, three microwaves, one generator and five computers.   When we sell our last investment property, this should knock down the total a bit.

Of course, some of these appliances and machines rarely wear out, or if they do, they are merely discarded rather than repaired.  And often, these are the simplest versions of such machines.   So another strategy is to buy simpler, less complicated products.   A two-wheel drive car, for example, is simpler than a four-wheel-drive, as noted above  - and still fulfills most people's needs.

A basic refrigerator, like you would have in an apartment, can last decades with little or no maintenance.  Fancy ice-through-the-door jobs, on the other hand, may tend to break sooner.

We recently rented a camp in Vermont.  It was primitive, with no insulation, or indeed, any sheet rock.  The only HVAC system was a wood stove.  It had a simple refrigerator and a basic electric stove - and that's it.   One bathroom, one toilet, one shower.   Maybe a bit too primitive, but easy to deal with, if you were the owner.

The neighbor next door had "blown out" their camp and put in multiple bathrooms and a gourmet kitchen.  I am sure it is nice and all, but after a few years, the cracks in the granite countertops and the scratches in the high-end appliances will break your heart.  And then all that stuff breaks...

The longer I live, the more I realize that owning less is more and the less complicated you can make your life, the better.
Newer Post Older Post Home