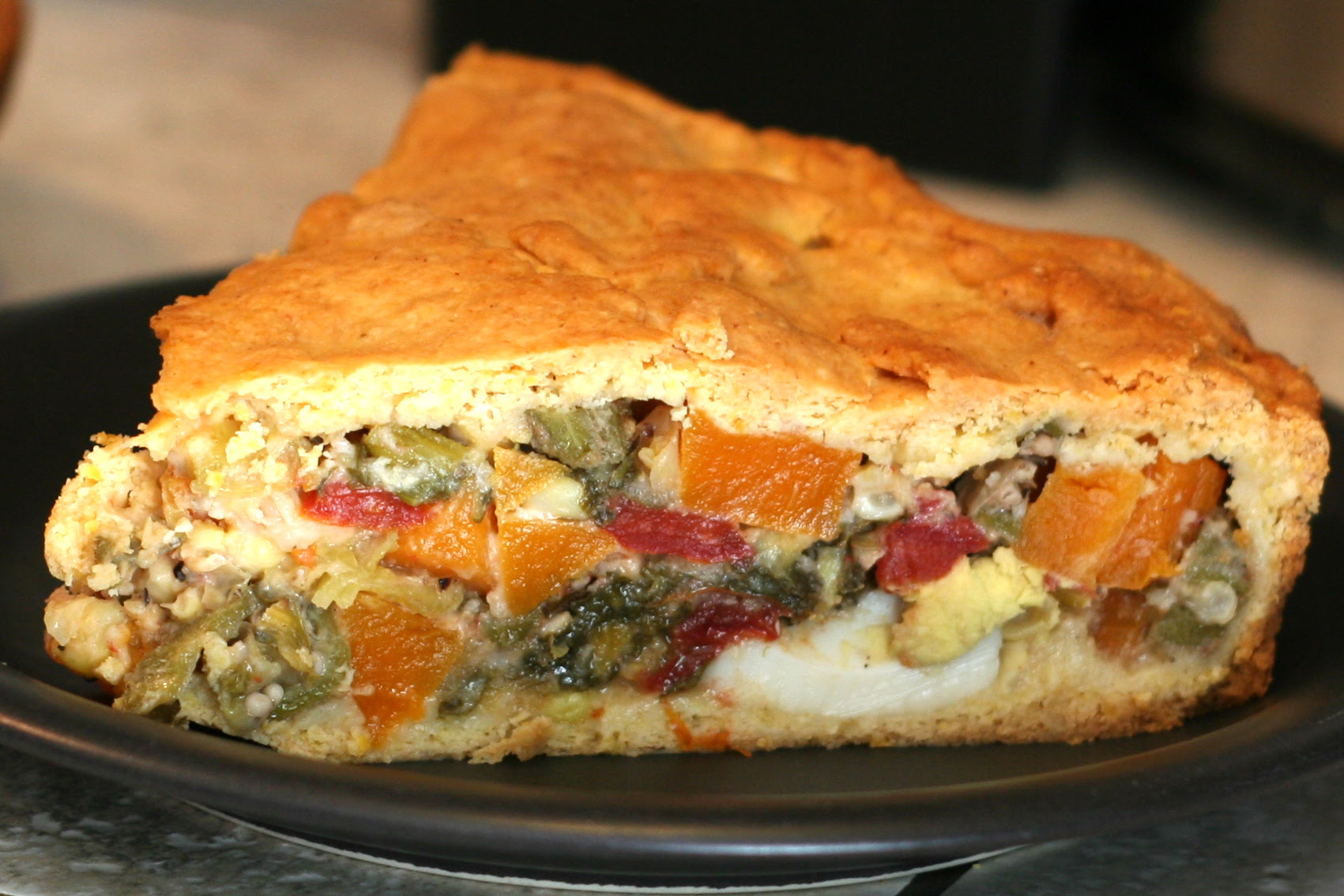 Nothing to eat in the house?  Try refrigerator pie!

You may think this is some sweet treat - a kind of sugary pudding pie that is loaded with calories.   But it is anything but.  If you are stumped as to what to eat, consider making a refrigerator pie.

A few years ago, we belonged to a "farm share" program, which is a bunch of dirty stinking hippies growing things like Kale and Collards, which basically have no caloric value whatsoever, even if they are chock full of "viti-mens" (so is Guinness) and will make you regular as a clock.

Anyway, we ended up with a refrigerator full of this stuff - oddball vegetables and enormous root-things that looked rather scary.

Most Liberals would quietly throw it all away and claim to have eaten it.  But of course, we would have none of that.

What to do with a refrigerator full of veggies, as well as a dozen eggs from the farmer down the road (no two the same size or color?).

And "Refrigerator Pie" was born.

We came up with this last year while on the farm-share program. We had so much kale and swiss chard that we didn't know what to do with it.

Take a pre-made pie crust, and bake according to instructions, then line with a small amount of shredded cheese.

Then, put whatever you have in the refrigerator in it. Rice, leftovers, vegetables chopped up, tofu, whatever you have. Add a eggs to bind it together (it will cut easier and not fall apart).

You can add a top crust to the pie, or leave it open like a quiche. It freezes easily. It is simple to prepare and provides food for multiple meals, or for company (our friends wolf it down)

(there was probably some leftover rice in there, that I forgot to count).


It was good.  Of course, we washed it down with some local Finger Lakes wine, and maybe that made it seem better.  But the smell, while it was cooking, was sublime.

To us, "refrigerator pie" means taking whatever is in the refrigerator, chopping it up, and putting it in a frozen pie crust and cooking it.   What can you use?  Any kind of vegetable, from carrots, to brocolli, to carrots, to potatoes, to onions, to kale, to collard, to whatever.  The more the merrier.  Boil some rice and throw that in, if you need some "filler".

Some leftovers from last night?  Toss 'em in.   Some hot dogs?  Slice them up!  Have some cheese?  Grate it up!  Whatever you got - throw it in.  And don't skimp on the fresh garlic, hot sauce and peppers.

And the pie will be enough to serve four people - or two people for two meals.

Our ancestors used to make pies like this.  Folks in the North of England called them "Pasties" and filled them with meat and whatever was left over from last night.  Wrapped up in a towel, they would still be warm when lunchtime came around in the fields (and if you are ever in the U.P., you will see a lot of shops selling these).  Making pies, out of "whatever" is a old and honored tradition.

It is worthwhile to keep an extra frozen pie crust in your freezer, just for this....
Newer Post Older Post Home