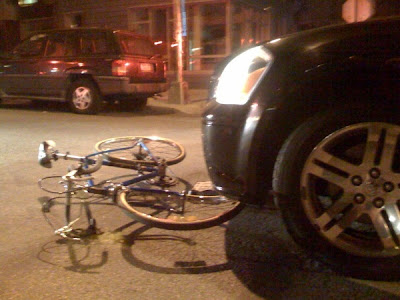 Bicycles can be a economical means of transportation.   But all it takes is one run-in with a car to ruin your life.


When I was a young technician at Carrier, we had a senior tech named Ken Cunningham, and he was the greatest guy in the world.  Smart and funny and full of self-depreciating humor, he was always quick with a joke and just a nice guy to be around.   And he was lucky to be alive.

A few years before I went to work there, he was hit by a car while on his bicycle, on his way to work.  He rode his bike nearly every day - when it wasn't snowing - and he had a body of iron to show for it.

But one morning, a motorist, who was prone to epileptic seizures and also had to use leg braces and crutches to walk, passed out behind the wheel, swerved off the pavement and hit Ken from behind, on the shoulder of the road.

The bicycle was destroyed.  The rear stays were pushed out flat and the rear wheel bent in to a pretzel.  Ken hit the hood of the car and went over, fracturing his skull, breaking several ribs, as well as an arm and a leg, as I recall.  He was unconscious.

When the Police arrived, the motorist, who by now was awake, said that Ken was riding "in the middle of the roadway" and not on the shoulder, and moreover was "on the wrong side of the road" - the latter statement reflecting a misunderstanding by most folks, who think you are supposed to be riding facing traffic, which of course is not true.

Ken, being unconscious, was unable to tell his side of the story.  So "wrong side of the road" and "riding in the middle of the lane" were on the traffic report.

Ken recovered from his injuries, and since he was in such great shape, he recovered very well - for a man in his early 60's.   His wife bought him a stationary bicycle and forbid him from riding on anything but a bike path, from then on.

He hired a lawyer, and years later, their case went to trial.  However, since the only "witness" was the motorist, it was a tough case to try.  The damning Police Report was no help either.  Ken could not testify to much.  As in the case with most head injuries, the last thing he remembered was leaving the house that day.   They settled out of court for a modest sum.   As his Lawyer put it, "the Defendant is going to show up in his crutches and leg braces, and the Jury will think HE was the victim!"

Now, a lot of die-hard bicyclists miss the point of this story entirely.   They point to the facts and say, "Well, clearly the motorist was at fault, man!" as if somehow that made it all "right" in their minds.

But no matter who was at "fault", dead is dead - or severely injured is severely injured.   And crippled-for-life is a high price to pay for biking to work.  Ken's wife was right - no more road riding!

Why do I say this?  Well, when you ride in the road, on busy highways, getting hit by a car is a predictable event.   And you can't go through life pretending to be continually surprised by predictable events and predictable outcomes.   It is a crappy way to live.   If you ride long enough, eventually you will get hit.   All the laws and rules of the road and your being "right" make no difference.   You will get hit and end up in a world of woe.  The laws of probability are very inflexible on this point.

It is just like with motorcycles.    They are fun and all, but ride one long enough, and you will encounter a car turning left in front of you.  You can bank on it.

Yes, the odds of getting hit on any one day are not great - but greater than you think.   The problem is, the outcome is very dire.   You may be taking a long-shot bet, but you are literally betting your life.  And if you ride long enough, eventually the law of probability catches up with you.   Perhaps the odds of flipping a coin are 50/50 - heads or tails - and you may get several "heads" in a row.  But if you flip a coin long enough, eventually you will flip tails.

A stream of traffic on a highway is like a 50-mph river of metal.   Cars whizzing by are not only scary, they are extremely dangerous.  One slip by you or a distracted motorist (likely texting) and it is all over for you.  Even a "minor" impact at 25-35 mph can kill you, particularly if you go under the car.

Does this mean you should never ride a bicycle?   Well, not really.  Only that you should not be lulled into a sense of complacency about a bike.  And you should ride defensively rather than trying to assert your "rights" and end up dead.

I see bicyclists, all the time, courting death, not only on our little island, but in traffic in major cities.   They often take risks to save a few minutes or to assert their "bicycle rights" and put themselves in extreme danger.

Riding on roadways is really murder.   Even the faster cyclists can only maintain about 20 mph on average.   Most cars are going by, even in a crowded city, at 35 mph or more.   And cars weigh two tons.   If there is a shoulder, use it.  And if your narrow bicycle tires can't ride on a shoulder, ask yourself why you are riding such an inappropriate bike for the real world.

On our island there are no shoulders, but miles of bike paths.  The "serious" cyclists ride their expensive "road bikes" on the road, and often ride two or three abreast.  They are asserting their "cyclists rights" to occupy a lane.  And it is a foolish game to play.   Why?  Well, the average age on our island is 75, and many of the elderly drivers are having problems with their eyesight, reaction times, and lane control.   You really want to play "chicken" with an 80-year-old with cataracts, who can barely see over the dashboard of her Buick?  Be my guest!

In cities and suburbs, I often see cyclists run red lights and stop signs.  The game goes like this.   You pass a cyclist on a roadway.  At the next stop sign or red light, they zoom past you, often passing close to your car or between your car and another car, and barely slowing down, they go through the stop sign or red light.   There are number of problems with this.

First of all, it is illegal as hell.   Yes, cyclists are supposed to obey the rules of the road and have a right to use the road.  But when you run red lights and stop signs, you are breaking the rules and pissing everyone off.   But more to the point, when you zoom between cars or a car and the shoulder, there is a chance someone may open a car door, decide to turn, or whatever, and you will be caught in a metal vise.

And it goes without saying that running red lights and stop signs is just dangerous.  Maybe a cyclist doesn't have to worry about the A-pillar, but other driver's do.   I was nearly run over by a driver here, who "cut the corner" making a left turn, and almost plowed into me, while I was STANDING at the stop sign.   He could not see me because of his A-pillar, and by "cutting the corner" he was traveling into the oncoming lane.  Run a stop sign or red light, and chances are, the guy going the other way will not see you, until it is too late.

I enjoy biking, but I don't enjoy biking on roadways, particularly busy ones.   Why?  Because it is noisy and crowded and people driving cars are not very nice.

Yes, we need more bike paths.  And yes, our country is building them.  But for some perverse reason, many bicyclists refuse to use such paths, insisting instead on riding on public roads in the heavy metal stream of car traffic, even if a bike path is parallel and less than 10 yards away.   I for one, just don't get it.   Bike paths rock.  Riding in traffic sucks.

If I had no bike paths to ride on, I seriously would reconsider bicycling and perhaps take up another activity, like walking.   Riding in traffic is just not fun or safe.

I used to ride my bike to school - 20 miles each way - along the old Erie Canal towpath near Syracuse.  It was a great ride, except at each end, where I had to traverse a few miles of roadway, and deal with the jerks in cars.   But since most of the ride was on a dedicated bike path, it was a nice, relaxing ride.   But of course, the packed gravel path did require a mountain bike, not some douchebag road bike.

In Washington, I used to ride up the bike path along the Potomac from Mt. Vernon to Alexandria, Virginia.   Again, it was a path that required a mountain bike, with wide tires.  But it was fun and scenic.   Some idiots would always try to ride their "road bikes" on this Mt. Vernon parkway, which was a shoulder-less road, and it was amazing than more of them were not hit and killed.   Again, I enjoyed the ride, except for the city street parts at each end.   I would explore less crowded streets to use and try to avoid the commuter rush.   It made a big difference.

Here on the island, we have a network of bike trails - and again, we have these folks who insist that they are "too serious" to ride on them, but instead drive to our island to ride their expensive road bikes on our shoulder-less roads.   When you try to pass them in your car, they intentionally veer out into the lane, to "prove their point" that they are entitled to a lane.  And they give you nasty looks if you do pass.   What is the point of that?   They would prefer to have a line of cars behind them, all trying to pass?  I fail to grasp the point of it.

Well, the point is, I guess, to wear your Livestrong bracelet and your USPS racing jersey and pose as a "serious racer dude" bicyclist, not just some "amateur" who might actually be having fun, right?  In other words, it is the same-old, same-old that has dogged our humanity since the get-go - the need for people to seek status and show others that they are "better than you" - even if these decisions come at a great personal cost to the individual.

But I wonder if they will think it is worth it all, once they have their head buried in the grill of that old lady's Buick, and watch their life drain out on the pavement.   Was it worth it to be so serious?   Or would they have been better off with a cheap mountain bike, a picnic lunch, and a nice ride through our forested paths, followed by a spirited sprint down the beach - all without a car in sight.

And it will happen someday - someone will be killed in a horrific bike accident on this island.   It is only a matter of time.  I can only hope it is not me on the bike, or me behind the wheel, when some Lance-Armstrong wanna-be swerves out in front of my car.

And all just to make some sort of "point".   I don't get it.  I really just don't get it.
Newer Post Older Post Home