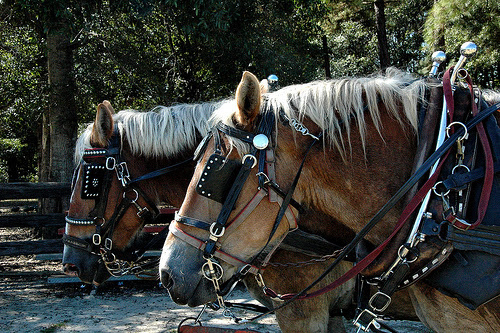 Even Mules love their bling...

Once upon a time there was a Mule named Bob.  Like any other Mule, Bob was hitched to a wagon every day and made to haul heavy loads through the streets of the city.   It wasn't a bad life.  He got up at dawn, got his harness ready, and hauled until lunch.   He and the other Mules would then take a break and have some oats, and share some Mule gossip, before returning to work.   At the end of the day, they would all head back to their respective barns, and have a hearty supper, before going to bed and getting ready for another day of hauling wagons.

But Bob remembered what it was like as a young Mule, with no responsibilities, frolicking through the pasture.  Life was good, and the grass was free.   But the older Mules snickered at him.   "Foolish young Mule!" they said, "You'll understand soon enough that life is about more than frolicking and free grass!  You'll have to work for a living, and work is hard!"

Of course, Bob thought this was a raw deal.   But before long, he was forced to go to Mule School, where he was trained to wear a harness and haul a load, along with all the other young Mules.   And although the loads were small at first, with each successive month, they increased the load, so that the Mules would all graduate as good reliable load-haulers and be sent off to work.

And of course, all the young Mules hoped to find a good job hauling the heaviest of wagons.   The oats would be fine, and it would be such a privilege to do such important work, of course!   And come graduation day, they were all assigned a new harness and sent off to work hauling wagons.

At first, it was fun to be hauling wagons through the streets of the big city.   There was so much to see and do, and so much activity going on.  Every day brought another new experience, and being a young Mule in the Big City was a lot of fun.  And young Bob the Mule more than earned his oats this way.  And like all the other young Mules, there was plenty to spend it on, if you wanted to.

"Hey Bob!" his driver called one day, "You're doing pretty well, hauling this heavy wagon!   As a reward, I bought you this fancy new harness!"

And it was a fancy harness, with metal medallions and fancy worked leather.  It shimmered and shone in the sun.  "Gee thanks!" Bob said, "This is great!"

And the next day, he went off to work in his fancy new harness, showing off to all the lesser Mules, how important he was and how heavy a load he could haul.  After all, only the most important Mules got to wear such a fancy harness.

But before long, Bob noticed that other Mules had fancy harnesses, and some fancier than his.   And while this got him down a bit, he was still happy to have his fancy harness, as it was so much better than the plain leather harness he got when he graduated from Mule School, even if that harness was basic and serviceable.

A few months later, his driver showed up with a fancy new wagon - it was bright yellow with painted wheels and pin-striping.  It was very impressive to behold!  "Wow!  What's this all about?" Bob asked.   "Well," the driver replied, "You've done such a good job hauling the heavy wagon, we can afford to buy a fancy new one!"

And Bob was pleased.  After all, even though a lot of Mules had fancy harnesses - some even fancier than his, not every Mule had a colorful painted wagon to pull through the streets!   He set off that day with a bit of extra pride in his step.  And he noticed the looks of envy he got from the other Mules.

But of course, hauling heavy wagons was hard work.  And to pay for the fancy harnesses and fancy wagon, the driver had to load heavier and heavier loads into the wagon.  And often they both had to work for longer hours, just to have enough money to pay for it all and keep them in oats.   At the end of the day, Bob was worn out and tired, and often just stumbled home, wolfed down some oats, and then fell asleep standing in his stall.

One day, while pulling his colorful painted wagon up a particularly steep hill, Bob saw an old friend of his - an older Mule - suddenly collapse on the street.  Bob had known this Mule since he was in school, and had always looked up to him as a role model.   "What's the matter?" Bob asked his friend.

"I can't haul the heavy loads anymore!" his friend gasped, "I'm afraid I'm done for.   And soon enough, the knacker's wagon showed up, and they tied a winch to Bob's old friend, and hauled him away.   Bob asked his driver, "What will happen to my friend?"

The driver was silent.  "Well, they will take him away to a place where he can get well.  And maybe then he can retire to the Happy Acres Pasture, where the grass is always green and the oats are plentiful!"

Bob was intrigued.  This Happy Acres place sounded like a swell deal - and a lot like the pasture he frolicked in as a youth.  "Will I get to go to Happy Acres?" he asked the driver.   The driver mumbled, "Well, yea, maybe someday" and he shook the reins to urge Bob on.

But that day at lunch, some of the other Mules told a different story.  There was no Happy Acres Pasture, they said, just the knacker's van and the slaughterhouse.   "Fall down on the job, and that's the end of you!" one Mule said.  Bob chewed his oats slowly and thought this over in his head.

He was working harder and harder, he thought, and not really getting anywhere.   While he had a nice harness and a fancy wagon to pull, he never was able to get more oats - or set anything aside for Happy Acres.  If he kept up the life he was leading now, he would end up like his friend, collapsing in the street and being hauled away to make dog food.

These thoughts disturbed him.   Were all the fancy things in his life worth it?  Or were they just a trap - an unnecessary expense that tied him to that wagon, day in, and day out, without ever any hope of relief?

He asked one of the other Mules about this at lunch the next day.  "I try not to think about it," the other Mule said, "I'll just work until I'm 70, I guess.   Say, did I show you my new harness?  It has real silver medallions on it!"  And all the Mules gathered around and ooh'ed and aaah'ed over the new harness.  And pretty soon the conversation turned to which harnesses were the best types, and who had the nicest wagon to pull.

Bob walked away, concerned.  It seemed that no one really cared about what happened to them, so long as they had a little oats to eat and some shiny things to wear.   They were willing to sacrifice their whole lives for these things!   Were they happy?  Or just miserable slaves who distracted themselves with shiny objects and local gossip?

So the next day, Bob talked to his driver.  "Say, I've been thinking," he said.   "A Mule, thinking?  That's a new one!" said the driver.   "No, seriously," Bob replied, "What are we doing this for, anyway?  You and I get up every day and bust our asses (no pun intended) just so we can have a better harness to wear, or a shinier wagon to drive!  There has to be more to life than this!  Why can't we live at Happy Acres?"

The driver had never thought of that.  He rubbed his chin and looked down at his fancy new uniform and his shiny buckled shoes.  Maybe the Mule was onto something!   "But how will we pay for our oats?" he said.

"Well," Bob replied, "if we sell the shiny wagon and the fancy harness, we can go back to using my old harness and our old wagon.."

"And I could ditch this ridiculous costume!" the driver replied enthusiastically.

"And then we can go live at Happy Acres," Bob continued, "and if we need money for oats, we can find work hauling things part-time.   Oats are not that expensive, but shiny wagons are.  So we won't need  much to get by, if we just change our priorities."

"Sounds like a swell idea to me!" the driver cried, and with that, he shook the reins and shouted "Giddyap!" at Bob.

The rest of the day was full of excitement.  They delivered their last loads and and talked about their new plans.   They found a buyer for their shiny painted wagon almost right away.  And Bob found a young Mule who was happy to pay for the fancy tooled harness.

The next day, Bob and his driver set out down the road to Happy Acres, with all the money they had from selling their wagon and harness - as well as the driver's fancy uniform and a lot of other things they had accumulated in their house and barn.  The driver was whistling as they clip-clopped down the road.  "Isn't this the life?" the driver said.  "You've got that right," replied Bob, "No place to be, no loads to haul - unless we want to!   We're our own bosses!"

And they reached Happy Acres and bought a small house and a barn for a pittance, as prices were a lot lower outside of the big city.  And on occasion, someone would ask Bob and his driver to haul a heavy load for them, which they were happy to do, as it made them some extra money to pay for their oats.

And they both lived happily ever after, that is, until one day, many years later, Bob dropped dead in the pasture, eating his favorite grass.  The driver couldn't bear to take him to the knackers, so he took out a shovel and dug a very big hole, right where Bob lay.

It took him all day to dig the hole, but at last it was big enough and deep enough to fit Bob.   And he buried Bob right there.  "He deserves a good resting place, right here where he was happiest!" said the driver, wiping a tear from his eye, "He was one smart Mule!"