Why the Richest Man in the World is a Mexican 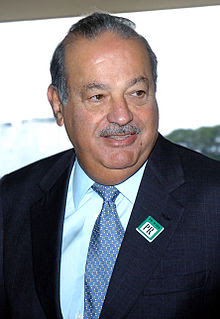 Given the nature of the Mexican economy, it might be surprising to some that the wealthiest man in the world is from Mexico.  However, the Mexican economy is well-suited to concentrating money in the hands of a very few people, such as Carlos Slim.   Do we want this system in the United States?

Many on the far-right are convinced that the Democrats want to merge America with Mexico and Canada.  They spread false rumors about an "Amero" coin that will replace the dollar, and a free-trade zone between the three countries.   While the latter is somewhat true (in a limited form), there is no danger of Democrats merging the U.S. with Mexico.
Republicans, on the other hand, look at Mexico with envy.  In Mexico, if you come from wealth, well, you get to keep it - and make a lot more.  The tax base is pretty low, and the system is rife with corruption and influence-peddling.  The net result is, if you have connections, you get money and power - and get to keep them.   No meddling Liberals to whine about the fate of peasants and talk of taxing you to pay for their care.
In Mexico, it is said that basically a few powerful families control most of the country - and indeed, most of the land.  If you are born into poverty, you pretty much stay there.  There are few opportunities for a small businessman to get ahead (as Carlo Slim's Father did) without running into the brick wall of government corruption as well as various gangs.
But once you have money - and connections - well, anything is possible, and in fact, probable.  And Carlos Slim became the richest man in the world, by running telecommunications companies in of all places, Mexico, one of the poorest countries in the world.
OWS protesters like to whine about wealth distribution in this country - they should look South of the Border. Things are so bad in Mexico that, until recently, millions fled across the border to seek a "better life" working at menial minimum-wage (or sub-minimum-wage) jobs, often toiling at hard labor.  That is the "good life" to an average Mexican - landing that sweet job at the chicken-gutting factory and perhaps only losing a finger or two.
Americans, on the other hand, shun such jobs, which is why Mexicans (and others from Latin America) take them.  And we criticize them for working so hard (as it shows us up).
But the question is - do we want to end up like Mexico?  Do we want to end up as a country with a few very wealthy people commuting to work in Helicopters from their walled and gated communities, while the rest starve or scrape by on as little as possible?  Do we want to have that kind of income disparity here in the United States?
The difference between Mexico and the United States is that, at least for the time being, we can vote, and we do have choices.  For 70 years, the People's Revolutionary Party (PRI) in Mexico ran things.  People finally got fed up, and elected the more conservative PAN party.  Things got worse.  Now, it looks like the PRI might be back in power, but not much will change, of course.  Corruption will still be rampant, and those that have, will continue to have, and criminals will be easy to spot, as they all wear Police uniforms.
We are going down a road, in this country, where a smaller and smaller group of people control more and more of the economy - and our media as well.   Those on the far-right complain about the "Liberal Media", and yet, Fox News remains one of the most popular cable news channels (perhaps the most popular) and can hardly be considered "Liberal".  Rupert Murdoch, owner of Fox News, also owns a number of newspapers, including the Wall Street Journal.   If anything, our media is bending to the Right, not the Left.
I am not sure that the solutions to the "problems" our country faces can best be solved by Billionaires in office.  And for the life of me, I don't understand people who think a Billionaire has their best interests at heart, unless they are also Billionaires as well.
Newer Post Older Post Home