What Ever Happened to Zipcar? (Pop Investing) 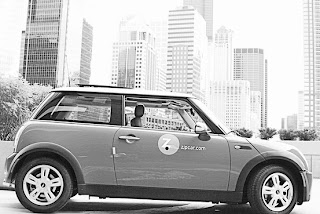 Zipcar still struggles along, making a paltry two cents a share.  While the company might survive for the long term, the IPO was a horrible investment, and even today the stock is wildly overpriced.

(NOTE:  This article is outdated, as ZipCar, after losing millions, was sold to AVIS for $12 a share.)


As I noted in The $150,000 Mini Cooper, the IPO price of ZipCar made no sense at all.  And the market seemed to agree, with the stock price, which zoomed to nearly $30 a share after the IPO, is not languishing at $7 a share.

Yea, that is overpriced.   And while the car-sharing concept may have traction (sorry) it appears there are a lot of these services out there.  I've seen a few car-share cars on the road, even when camping on the Blue Ridge Parkway, and up in Canada.  But none of them were from ZipCar.

The barriers to entry in this business are low.  And many rental car companies are already in the business, so to speak, and can add a "car share" feature to their existing business at little or no cost.  There is no Patent, no secret sauce, no hipster caché design (such as with Apple), no trendy brand, to exclusivity whatsoever.

And in such businesses, the marketing model becomes a race to the bottom, rather quickly.   If you rent your car for $10 an hour, your competitor will try to undercut you at $9.   So it becomes a marginal business, where in order to make money, you have to be ruthlessly efficient, which often means being strict with your customers and employees.

And it also means there is little or no chance of profit growth for such a company.    ZipCar might be a good investment if you believe that they could increase their profits by a factor of at least 10, or perhaps even 20 (although frankly, 50 would really be necessary, in order to support $7 a share).  But that ain't gonna happen because if they could increase profitability, some other competitor would simply undercut their margin and create price pressure.

But the point of this posting is not to take yet another jab at ZipCar, but to point out that investing according to the News of the Day is a horribly bad idea.   The news media - and by that I mean the cable news networks, the news websites, and the like, all hype and promote stocks like this.  The "Long-awaiting IPO" is talked about eagerly, with each tidbit of news about the company and its share price discussed endlessly.

People who watch TeeVee get the idea that this must be important - it has to be, as the media said it was, right?   So they get to thinking, "Gee, maybe this is my chance to make a bundle!  I'll buy this stock!"

But like leasing a giant SUV (which the TeeVee also promotes) it is generally a really bad idea to do what the television says.

Of course, people then say, "Well, gee, how do you know what to invest in?"  - and that is the conundrum, isn't it?   Because buying and selling stocks or commodities (like Gold) is a tricky business and one where professionals spend years studying these markets and specializing in just one or two segments or even one or two stocks.

How can you out-smart these smart people?  General answer:  You Can't - so don't bother trying.

Getting stock tips from the media is a bad bet.  Going to online websites for tips is even worse.  Yet there are websites galore that preach various sorts of systems and schemes, from day-trading to the perpetual portfolio, to whatever.  Most of them, if not all, are selling hokum.

So, how do you invest?  If the crapola they talk about in the news and on the financial channels (with the shouting guy being the worst of them all) is just bad advice, then how do you know what is going to be the next big thing?

And the short answer is:  You don't.  And trying to invest based on the principle that you are going to "strike it rich!" is just gambling and gambling with your net worth - your estate and retirement money - is a really dumb idea.

Instead of striking it rich aim for striking it middle-class.   Invest in a panoply of things, from mutual funds, to insurance, to Real Estate, to bonds and stocks, to CDs and savings accounts, to - wherever you can squirrel away money.   Don't go for the "big score" but instead spread your risk among a number of different investments of varying risk.  And as you get older, put more and more into less-risky things.

Will you become a Billionaire this way?  Likely not.  But you are far less likely to end up destitute.

A lot of folks today are throwing money at "sure things" they read about in the Paper or see on TeeVee.  And usually, the invest long after the "sure thing" has appreciated in value.  They buy Gold at $1700 a share, instead of at $500.  They buy Apple at $600 instead of at $200.   They jump on the bandwagon just in time to ride it off the cliff.

And yea, a lot of folks bought ZipCar at $25 a share or more - thinking that since it was mentioned a lot in the media, that it would be a good investment.   But as any simple analysis showed even back then, it was not a business model that justified the share price.  And today, now that we see several quarters of earnings, we realize that even though the share price has tanked, it is still far over-valued.

I can't tell you the right answers for investing.  This is not a stock-tip site.   But I can tell you what the wrong answers are - anything hyped or even mentioned on television, whether it is ZipCar or Facebook, or some obscure stock touted by the shouting guy.

Just turn that shit off. It is just noise and not signal.
UPDATE: AVIS is buying Zipcar for $12 a share - likely in a stock swap. If you bought Zipcar at $25 a share, this represents a 50% loss. On the other hand, if you bought it last week at $8 a share, you just made 50%. And this illustrates how you can make money on a stock through a buyout.
UPDATE: February 2014: You don't hear about Zipcar in the press much these days. The Wikipedia page is clearly being groomed, with no mention of the Avis buyout or how well the division of Avis is doing. Avis stock, on the other hand, has continued to climb, which would suggest they are doing well with the project.
But the reasons Zipcar sold out to AVIS are clear: The company never made any money as a stand-alone operation.

"For nearly all of 2012, though, shares of ZipCar were trading for under $15—and under $10 since August. The company’s flailing stock price reflected ZipCar’s larger struggles. It had lost $55 million since 2007, never once turning a profit, though it was expected to make at least a few million last year. More importantly, ZipCar simply couldn’t attract more members quickly enough to expand and make the business more viable, according to the Wall Street Journal."
Read more: Does Selling Out to Avis Represent Success for ZipCar? Failure? Something Else? | TIME.com http://business.time.com/2013/01/03/does-selling-out-to-avis-represent-success-for-zipcar-failure-something-else/#ixzz2uVxlaSMM

In more recent times, we don't hear much about Zipcar or car sharing in general. A new trend is the idea of peer to peer carsharing, where individuals can rent out their own cars using sites like getaround or relayrides. Well, that was hyped in the media, anyway, a year ago.
But frankly, I think the whole idea was flawed from the get-go. It got traction during the recession of 2009 as people looked for "the next big thing" and car-sharing seemed like an answer for folks who were trying to cut costs.
Oh, and everyone was worried about global warming back then (Nothing has changed, of course, just people stopped worrying about it).
As the economy has improved, people can now afford their own cars, so growth is limited. It will still be successful in major cities, where population density allows the concept to work - just as bicycle sharing is taking hold in major cities in the US and Europe.
But for 99% of the population, owning a car is still going to be the norm, methinks.
Newer Post Older Post Home