Pit Bulls and other fighting dogs The Bull Terrier became very popular in this country after it was featured on the Television Series, "Baa-Baa Black Sheep".   People buy breeds of dogs based on TeeVee, I'm afraid.

Back when I was a kid, in the 1960's, we had dogs.  Most were mutts, but a few folks had purebred dogs like Collies, Golden Retrievers, Irish Setters, or maybe even a German Shepard, if they wanted a "guard dog".   Even breeds like Labrador Retrievers were fairly rare, back then.

Of course, back then, we didn't live in the culture of belligerence that we live in today.  Cars looked pretty dorky, not intimidating.  Even the early Mustang and Camaro didn't have grills on them that looked as if they were going to bite a piece out of the car ahead of them.  The toughest guys we knew back then were Joe Namath, who wore panty hose, and Mohammed Ali, who recited poetry.

A lot has changed since then.   Today, everyone has to be a tough guy, with a tough car, a tough truck, a tough bike, and a tough boat.  We all are pumped up on steriods, and posture like professional wrestlers, or "gansta's" - ready to rob a liquor store or solve a problem with a bullet, on a moment's notice.

And for most of us, it is just that - posturing.  Acting all tough-guy, because we feel intimidated by life.  We feel powerless in this modern economy, so we act out - we strike out - with these posturings of toughness.

This is human nature.  During the last major recession in 1979, people were losing their jobs, and they felt confused and powerless.  What was a popular song back then?  Take this Job and Shove it, by Johnny Paycheck.  We acted out a fantasy that we would tell our bosses what for, even as we begged and groveled for a precious paycheck (and voted for whoever promised us one).

So it is human nature, when confronted with powerlessness, to act out and act tough.  And it is no surprise that today, having a bad-ass dog is very popular.    So many people today have Pit Bulls, Rottweilers, and other fighting breeds, or mixtures of breeds of these dogs.  And since the shelters are full of such breeds, they tend to spill over into the "secondary market" of people trying to adopt a dog as a pet.

For example, a neighbor decides to adopt a dog.  They already have a small dog, one of those annoying breeds.  They get a pit-mix at the shelter, and it is like night and day.   The small dog yips and yaps but is generally well-behaved.  The pit-mix strains at the leash, jumps up on people, and is a very aggressive and active dog. 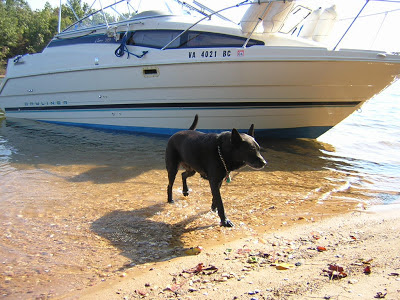 Our first dog was a Lab-Chow mix, and although well-behaved, was always a challenge.   Many people were scared of her, which always amused me.  But white teeth on a black dog can be intimidating, particularly to people who are afraid of dogs. 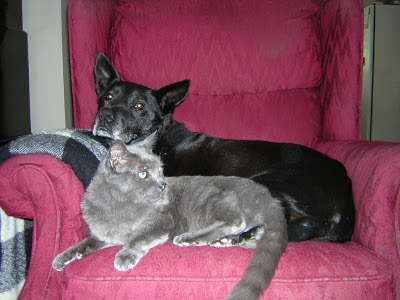 She was gentle with our cats, but did not like other dogs and other cats, particularly as she got older.


It is the nature of the dog, I'm afraid.  Our previous dog, who lived to 14 years, was a Lab-Chow mix.  We got her as a puppy at the pound and took her to obedience training.  The trainer said to us that this type of dog would "always be a challenge" as she would always contest who was Alpha dog in the pack.  And while she was a good dog, he was right.  She was always the kind of dog that would strain at the leash, or, if you let her off her leash, would run wild.

Our present dog is a retired racing Greyhound - the Valium of dogs.  The biggest problem with her is tripping over her, as she is large and likes to sleep - a lot.  But she has an entirely different personality, and it is based on the breeding, not the training.   About once a day, she goes nuts and wants to run - for about two minutes, full speed, usually around the house.  The rest of the time, she sleeps.

I can live with the running part.   She doesn't hurt anyone when she does that, even in the house (even as I speak, writing this).  She doesn't bite people or act aggressive.  That's the main thing.   In fact, they are incredibly gentle and loving dogs - good companions - which is the reason anyone should want to have a dog, right?   While I loved our Lab-Chow mix, I always felt she had an agenda of her own - and if we fit into it, that was fine with her. 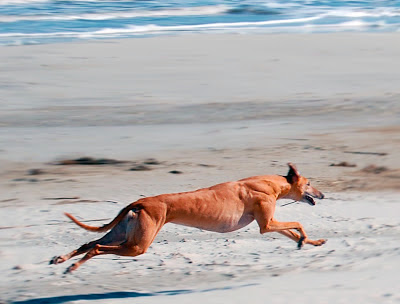 Greyhounds are also purpose-bred dogs.  They need to run, and will run, whether you want them to or not (but only for a minute or two).  Fighting dogs have the same issue - they are bred to be aggressive, and getting them to be docile goes against centuries of breeding.

Fighting breeds have their own characteristics bred-in.  They were bred to fight, over generations, just as Greyhounds were bred to race - since the time of the Pharaohs.   And yet, many fighting dog owners tell me, "don't condemn the breed, it's the training!"

But you can't un-train breeding.  Your Pit or Rottie might be nice to you, and only for the time being.  But he might bite a stranger, or worse yet, a child.   And when dogs like this do attack people, the same refrain is heard again and again - "but they never bit anyone, before!"

A friend of ours had a pit mix.  We were at the beach, and they let the dog off the leash, thinking it would like to "play" with our dog.  It did.  The dog made a beeline for her throat and clamped his powerful jaws on her slender neck.  Blood shot out everywhere.  "Gee, he's never done that before!" they said.  I pried them apart quickly, and fortunately, I intervened (forcibly) before he could tear her throat out, which was what he was trying to do.

Up until then, I bought into the mantra of "don't condemn the breed!" when it came to fighting dogs.  I don't believe this anymore.

The point is, why do you feel the need to have a bad-ass fighting dog?   Are you going to fight him against other dogs, like Michael Vick?   Or do you think it will keep people from robbing your house?  Or is it to project an image of toughness, as if to say, "look at me, I'm a bad-ass with a bad-ass dog!"

All are horrific reasons for owning a dog.  Get a nice dog instead.  Just a thought.

And dogs can live to be 14 years old or more - which is a good long time.  And the cost of owning a dog can run $1000 a year or more.  That's $14,000 you've spend on projecting an image of yourself - and image you may find you no longer want to project, ten years down the road, when you are living in the suburbs, having children, and your neighbor rings the doorbell and says your dog just bit his kid.  Or mauled their baby.

These things go through phases.  A dog is mentioned in the media - usually featured on a TeeVee show, and the plebes all demand the same dog from a puppy mill, which churns out inbred and sickly dogs to meet demand.   Then a new breed becomes popular, and the whole cycle repeats.

When we got our first dog (the Lab/Chow mix) the pound was filled with those annoying "Frazier" dogs - Jack Russell Terriers.  Clueless Yuppies (are there any other kind?) watched the show and decided that drinking coffee at a coffee bar and having a Jack Russell was a swell idea.   After the Jack Russell tore apart their condo a few times, they dumped them off at the pound, on the way to the coffee bar.   They were spastic dogs, really.  And if you work 10 hours a day, well, they take out their anxiety on your leather sofa.

With the Michael Vick thing, perhaps the era of the fighting dog is on the decline.   Perhaps.   Stupid people (of all races) do stupid things.  And the dumber and poorer they are, the more likely they are willing to sign on to the culture of belligerence  bandwagon.  Again, this is a predictable outcome for powerless people.  It is not a sign of strength, but of weakness.
Newer Post Older Post Home