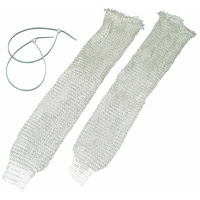 They look a bit like chainmail condoms, but these washing machine drain socks can save your plumbing.


Owning a home is a daunting task.   You now own, and are responsible for, a number of different mechanical and electrical systems, most of which you have no idea how to fix, and even if you did, you would not have the right tools.  It can be an expensive nightmare.

And in any financial transaction, if you are not equipped to deal with things yourself, you will get ripped off, big time.   And when it comes to a home, many items are very hard to repair, or are buried underground, and thus expensive to fix.

For example, when we had a pool installed, they broke the main water line to our house.  The old water line went through the back yard, even though the city had installed new city water meter and line in the front yard, decades earlier.   So no one expected to find a water line in the back yard.   The pool contract explicitly stated they were not responsible for underground obstructions, so I was on the hook to repair the water line.   The pool people at least shut off the water at the meter by the road.  But we had no water, not even to flush the toilet.

I called several plumbers in the Yellow Pages (the worst source for information, by the way) and they all said the same thing - emergency repairs like this would cost at lest $2500 to $5000.   And that is a whole lot of money, in case you weren't paying attention.

First, I shut off the main water valve in the house.   You should know where this is, by the way, in case you do have a plumbing leak or a washing machine drain hose fail.   You'd be surprised how many folks don't know where this important valve is - or try to exercise it once in a while, so it doesn't weld itself in the open position.

Once the water line was shut off, I took my longest garden hose, and some adapters I had, and made a double-ended hose with two female fittings, one on each end.  I went to my neighbor's house and told him I would buy him a case of beer if I could connect my garden hose to his outdoor faucet for the weekend.  He readily agreed.  I hooked up to his tap, and then ran the hose to my outside tap and then opened both.  Wa-la, we have water again, to flush the toilets and even run the ice maker.

No longer in panic mode, we could then carefully consider our options and take our time.  And no, the $5000 plumber was not an option.

Saturday morning I went to the local rent-a-center and rented a Ditch Witch and a trailer.  I think it was like $150 or so.  On the way home, I stopped at the big-box home improvement store and bought several ten-foot sections of 1" PVC water pipe ($3.99 each), some cleaner and solvent adhesive, and a number of elbows and connectors.  All told, maybe $50 in parts.  Why was this a $5000 job?  Because to most people, it is rocket science. 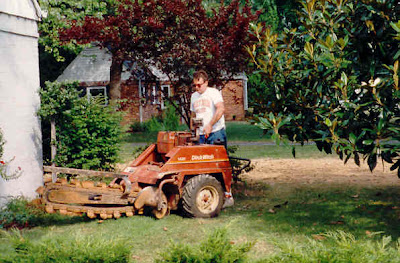 A much younger me, running the "dirt chainsaw" in the front yard of Washington Road.


Installing the new water line wasn't hard to do, just hard work, messy, and dirty.   The trench was nearly six feet down, which was probably overkill, given the frost line in Virginia.  But by the end of the weekend, I had a new water line installed and returned the Ditch Witch to the rental place. 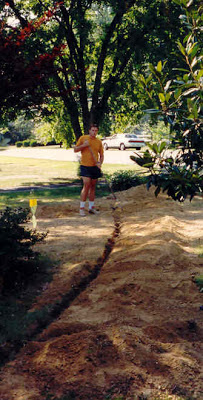 Digging the trench was the hardest part.


So, I was able to salvage the matter, for only a few hundred dollars.  Others would not be so lucky, if they were not as handy and clever.   And there are other pieces of home infrastructure that are harder to repair and replace.

In addition to your main water line, there is the sewer line from your home, to the city sewer, unless you have a septic system.   In many older homes, this may be a cast iron pipe, or an "Orangeburg" pipe or perhaps even sections of ceramic pipe.   As these pipes age, they can be problematic.   Tree roots try to pry their way in, sensing all that good nutrition going down the pipeline.  And with ceramic or Orangeburg pipes, they can sneak a root in here and there, at the joints.

Cast iron pipes rust through, eventually.  But long before that, they corrode and start to look scaly and rough on the inside.   Eventually, they become so rough that they will entrap debris - food from your dispose-all, or lint from your washing machine.   Thus junk will eventually clog the drain when you least expect it (usually when company comes) and the end result is a trip from the roto-rooter man, and an unexpected $250 repair bill.

If the pipe gets bad enough and has to be replaced, you are talking $5000 or more to have a crew with a backhoe tear up your front yard and install a new sewer pipe.   Fun!   And unlike my water line project, this is hardly a "do it yourself" kind of job.

With septic systems, similar problems abound.  Solid matter will clog your septic tank, forcing you to have it pumped out more often.  And solid matter in the waste field will eventually clog the drain tiles, requiring an entire rebuilding of the septic system - again a $5000 job at least, or at least that is what I paid to have one installed at our barn.

So it behooves you to keep your main drain in working order.  Not flushing down paper towels or "flush-able wipes" (a misnomer if there ever was one) is a good start.  Dispose-alls are fine and all, but using them as the lazy man's garbage can will come back to haunt you, eventually.

In our house, they installed a new sewer line for part of the house.  Being built on a slab, it is hard to get at the sewer line without a jackhammer.  But the previous owner did just that, and ran a new line outside.   But for some reason, they left the existing line from the laundry room and just spliced that into the new outside line.

The problem is, the laundry room drain is "slow" and was getting slower all the time.   Water from the washing machine would back up into the laundry sink, and it was not an easy drain to "snake" either.   We had a similar problem at Washington Road, and eventually, when the house was bulldozed, they put in new sewer lines for the new homes they built there.   I am glad I did not spend $5000 on a new sewer line!

One plumber suggested to us that our only real problem was the laundry room drain, and that a washing machine "sock", placed over the drain of the washing machine (and set to drain into the laundry sink) would help solve this problem.   They come in packets of two and cost about $1.99 a package.

It is pretty amazing, but within a couple of weeks, we had to change this "sock" as it was completely clogged with lint.   All that lint had been going down the drain, and attaching itself to the rough sidewalls of the aging cast iron pipe.   And I know this, as every time I snaked the line with my power snake, the head would come back with a wad of lint and small bits of fabric on it, as well as chunks of rust.

I recently added one of these socks to our home here in Georgia, and again, within two weeks, it was clogged solid.  I went out and bought six more.   All that lint was again attaching itself to our cast iron pipes, and causing the drain to slow down.    With the sock in place, the drain now is running faster and not backing up.

Is this a permanent fix?  Of course not.   But jack-hammering up our floors to replace this one drain would be an exorbitantly expensive project with little real gain in terms of resale value or improved draining.

A $1.99 sock kit is a much better option - preventative maintenance that avoids an expensive repair or call to the power-snake guy.