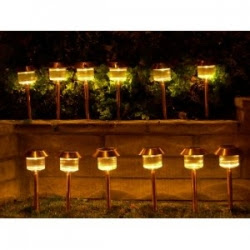 Lawn lights might make your house look cool, but they can cost a lot of time and money.

I used to have lawn lights on my house in Virginia.  Back then, they were plastic, and you had to string them with a transformer and a 24 volt cable.  I must have had a hundred of them around the house - on the sidewalks, around the pool, spotlights on the trees and shrubs, on steps and decks - you-name-it.   And while it looked cool, it wasn't cheap, even though I bought several sets at a Builder's Square going-out-of-business sale and at garage sales.

I actually saved the better ones and put them in my New York house, buying some new fixtures as well, with a faux copper patina.   But in my Georgia house, I have none, and no interest in getting any.  Why is this?

Every Winter, it seemed, they would burn out.  And in the spring, I would have to spend a day tracking down broken wires, burnt-out bulbs, and shattered or worn fixtures.  Wasps like to nest in them, so I had to clean those out as well.

Over time, the plastic ones get brittle and shatter.   The faux copper patina ones fade.  I would repaint them with Rustoleum metalflake paint, which looked cool, at least for a season or two.   And the connectors would corrode and not make a good contact.   I found putting silicone paste on the bulb bases stopped corrosion there, and using an emory board to clean connectors helped - at least for another season.   But by next year, the bulbs would be burned out again, and the connections all corroded.  It was a never-ending chore.

Did they look cool?  Yea, they did, particularly if you have a "look-at-me" garden in the front or back of your home.  Oh, don't get me started on how much that cost.  I'd rather not think about it.

Some say they deter burglars, particularly if you have the spotlights that shine against the house.   You know what I've learned?  If you are worried about burglars, you own too much crap, or you live in a crappy neighborhood, or most likely, both.  Own less shit, move to a nicer place, and learn to relax more.  It's cheaper, and it's money in the bank.

Today, they have new technology - solar-powered-lawn-lights.  These are not really new, as I had one as far back as 1995.  Back then, though, they were expensive, bulky, and relied on tiny incandescent bulbs, and produced very little light.  With advances in solar panel technology as well as LED lighting, solar powered lawn lights today are brighter, cheaper, and last longer then their counterparts of just a few years ago.

A single light, a few years back, might cost $40.  Today, you can buy a set of four or even eight for that price.  Of course, a lot of the cheaper ones put out little light, and they really don't "illuminate" much, like the ole 24V ones did.

But you know, even if they did, I still ain't buying any.   Why?  Because I don't want to mow around them.  Because they really don't do anything except tchotchke up my yard.  Because I'd rather spend $50 on something else or leave it in my bank account.  Because it adds no value to my home.  Because it really doesn't make my home look better.

Lawn Lights, and Solar Lawn Lights are classic examples of how companies today sell us stuff we really don't need.   Back in the day (like in the 1960's) the only people who had lawn lighting were wealthy folks, who could afford to run steel conduit and have 110V lights all over their property.   The plastic 24V jobs were a knock-off of that, right down to the housings.   Suddenly, we plebes could afford to have lawn lighting, just like Thurston J. Howell III!    But of course, it was not the same thing.

The marketers want to sell us upscale - get us to upgrade.  The sing the siren song of how you can own luxury goods, but on a budget.   Usually these ersatz luxury items - like fake Rolex watches - are cheaply made and no real bargain, as they wear out quickly.  And usually they are things you really don't need in your life, like the fancy barbecue or outdoor fireplace.    But we buy them for the perceived status and perceived luxury of having one.

Just say "NO" to end-cap displays at Lowe's!


UPDATE 2020:   We broke down and bought a set up solar powered lawn lights and three solar powered spotlights for the front of the house from Amazon.  They worked well for a while but one of them got kind of flaky. Then another one got hit by the lawnmower. Then the rain and the sun started to degrade them, and one by one they started failing. Total cost was about $70 and they lasted about three years.
Newer Post Older Post Home