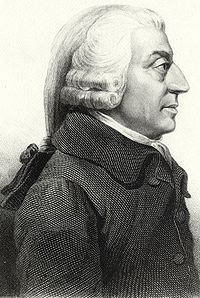 Adam Smith, who postulated that in a free market economy, the "invisible hand of the marketplace" would establish equilibrium.  Smith was talking about a theoretical model, not a blueprint for an economy.


Free-Market Economies don't exist, except in the heads of economists.  They are economic models or thought experiments, designed to analyze market factors.  And in that regard, they are useful in making broad generalizations of how an economy will work.   In real life, however, nothing is ideal, even if there isn't market manipulation by individuals, groups or the government.

And these manipulations are many, and many are inevitable.  We are not logical creatures, but rather we are often very emotional beings who are easily swayed to work against our own self-interest.  So the idea that we will all act as rational players in the marketplace is a fantasy.  There are a number of factors which skew the "free market" from its theoretical ideal:


Psychology:  Perhaps the biggest factor that affects free markets is that we are rarely the rational market actors that Smith postulated.  People buy things because they are sexy, or they think they will make them look sexy.  They buy things for status.  They go into debt for status.  In short, we do the opposite of rational behavior, most of the time.

This skews every single market - and explains, in part the blow-up of the Real Estate Market (in 1989 as well as 2009) as well as the IPO debacles of 2002 and 2012.   Individuals buy stocks, or houses, or cars, or iPhones, not as logical decisions, but as emotional ones.   As a result, the "invisible hand" is blinded half the time, and the equilibrium of the marketplace is distorted.   When cold, hard logic finally takes over (when people realize they can't afford their houses, or that Facebook stock is a poor investment), things swing back the other way - creating a few winners, and a lot of losers.


Government Intervention:   Folks on the Right decry government intervention in markets, as it tends to distort the market and cause people to do things they would not ordinarily do.   And this is a valid criticism.   Whether it is your home mortgage interest deduction, or a tax credit for buying an electric car, chances are, you are chasing after one form of deduction, credit, or tax haven.

For every government distortion in the marketplace, however, there is a constituency or promoter, who would argue that such distortions are necessary, even if they just favor a small minority of people.  And that right there is one problem with these programs.  When everyone is getting some sort of "fix" in the marketplace from the government, it becomes impossible to eliminate all these distortions.   Pretty soon, all of us are relying on the government to alter the market, to our perceived advantage.

There are a number of such distortions that the government creates in the marketplace.   Here are just a few:


Price Controls - everything from the price of gas to the price of milk has, at one time or another, been controlled by the government.  And often these controls, designed to protect consumers or producers, can backfire in a big way.   In California, price limits on milk, designed to protect consumers, are resulting in many milk producers declaring bankruptcy, as the drought raises the cost of feed and makes their dairy operations unprofitable.   Before you go blaming Democrats for price controls, though, remember it was Richard Nixon who imposed wage and price controls, back in 1971.  No one has "clean hands" in this deal.

Regulations - Regulations can be useful in creating a fair market.  They can prevent dishonest players from selling fraudulent or unsafe products.  They can, in effect, enhance trade by providing a level of confidence in the marketplace.   But they all have a cost, and a cost/benefit balance needs to be made.   And of course, many players in the marketplace will insist on regulations that do not help the market, but rather help only themselves.   The latter pretty much sums up all telcom regulations in the last 20 years.

Subsidies - Getting back to Milk again, we paid (or used to pay) farmers huge subsidies to produce milk.  And we did this often by buying up huge quantities of butter and cheese.  We also paid some farmers not to produce, directly subsidizing their incomes.   These actions, of course, distorted the market, causing a lot of people to get into the dairy business (a guaranteed income, why not?) or to leave land fallow that could have been put to good use.   Weaning ourselves from these subsidies is not easy - too many powerful interests are at stake.   And you realize this when you look at the defense and aerospace industries.

Taxes - Most citizens are herded by the carrot and stick of taxes.  We all live in fear of the IRS and yet we all love to chase after deductions and tax credits.   As a small businessman, I can tell you that running a business in America today seems like one long tax season.   Everything you do, it seems, is predicated on how it will affect your taxes, or what deduction you will get.  And keeping tax records is the main business of most businesses, it seems.  Corporations, too, chase after deductions and credits, and often this causes them to do things against the interests of the country.  Sending jobs overseas, for example, is not only profitable because of lower costs, but because of lower taxes as well.

Entitlements- These might not seem like a market distortion at first.  After all, entitlement programs are designed to help people, right?   But they have the effect of simultaneously raising and lowering wages, depending on circumstances.  For example, the laid-off middle-level manager in his mid-50's will never likely see that near-six-figure job again in his lifetime.   But since he is getting the equivalent of $20 an hour with unemployment, he turns down jobs that pay less - the jobs he will eventually be forced to take, once unemployment runs out.   On the other side of the coin, the $8-and-hour worker can't really survive well on that salary, unless it was subsidized with food stamps, medicare, and other supplemental income sources from the government.   Entitlements for the working poor often end up being a wage subsidy to the employers who hire them - such as Wal-Mart and McDonald's.   These subsidies make it possible for people to work at such low wages.


Manipulation by Individuals and Groups:  Over the years, the market has been distorted, intentionally, by various individuals and groups.   Folks, such as the Hunt Brothers, try to "corner the market" by buying up all supply, and thus distort prices.  Sometimes this results in huge profits, other times, the folks doing this get wiped out.   And it goes on today, even.   Apple was very successful with the first generation iPod, not because of the technology, but because they bought the entire first two years' production of the then-new 1" hard drive.   This allowed them to "corner the market" on MP3 players, as no competitor could come up with a competing product, at least initially.

Other groups have tried to manipulate the price of stocks, with varying success.   You can play the game, or game the system, with the latter often being far more lucrative.   These types of distortions can be very corrosive in the marketplace, as it causes people to lose confidence in their markets.  If every transaction is a rip-off, people will often just shy away from making transactions.   And some regulations, in this regard, are a good thing as they prevent this sort of distortion from taking place and restore confidence in the marketplace.

Are free-market models worthless?  Of course not, but they are just economic models, not real-life blueprints for an economic system.  The idea that "but for" our markets being unfettered, we would all be Billionaires, is just a fantasy.   And by the way, when someone tries to sell you on the idea that one thing can fix everything, chances are, you are being lied to.

Think about it.  In such a State, bribery and corruption would be rampant.  Why?  Well, a government official selling his office to the highest bidder would just be exercising Adam Smith's "invisible hand" of the marketplace - and with no regulation to hinder him, why not?

Buying and selling anything would be problematic, as con artists and fraudsters would have a field day.  You'd lose your shirt in the stock market to stock manipulators and people selling phoney stocks - like in the 1800's.  Every transaction would be a test of trust between the parties - perhaps transacted at gunpoint.   Commerce would slow, not quicken.

Similarly, while you might get excited about the prospect of a truly "free market" where prostitution, drugs, and firearms were all unregulated and legal, it stops being fun when you see the consequences, particularly when under-aged people are involved.  But hey, free market, right?  No need for "regulations" to disturb the pure and unfettered stream of commerce.

OK, Bob, you are being dramatic to make a point, again.  We get it.   Some regulations are needed in any marketplace to establish boundaries and create a level playing field for all the players.   It is just we don't need unnecessary regulation, that's all!

So we agree then, that a free-market economy is just an economic model, and a Randian fantasy of the word - not a workable blue print.

Then the only real question that remains is, how much regulation of the marketplace is acceptable?

Fine.  I'll debate that all day long.   And over time, our government stumbles along and pretty much hashes it out.   We end up doing pretty well, even if we oscillate from "too much" to "too little" regulation at times.

But don't try to argue that "Free Market Economy" policies are a panacea to anything.   Because they aren't.  If you really believe in that sort of thing, you are right up there with those kids in France who wear bandannas, spray-paint the letter "A" for "Anarchy" on walls and smash the front windows of a McDonald's, as if it were a political statement.

Because a true "free market economy" would be Anarchy.   And Anarchy sucks, let's face it.  It is not a "solution" to anything.