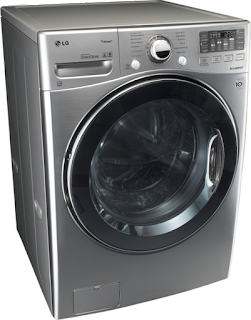 Pretty to look at, and loaded with high-tech "features" this LG washer is rated as a Consumer Reports "Best Product".  But is it a good value?  Not at $1100.


A recent article about Consumer Reports notes that they have come out again with their "best products of the year" article.   There are so many things here to parse, it is hard to know where to start.

To begin with, I have never been a big fan of CR and its model of measuring product quality.   Often the quality of a product is not evident for years, or even a decade, when its long-term reliability is evident.  CR has no way of measuring this - nor does anyone else - in a quantitative manner - and thus spends more time evaluating products by how easy it is to press the buttons and whether the product has convenient features.

So the entire concept is inherently flawed, in my opinion.   You cannot discern the quality of a product by kicking the tires, although you might be able to discern a few things, but not much.

But what is troubling to me is that the "list" this year is mostly for more expensive, higher-end products, including washers and dryers costing over $1000 each.

From the article cited above:

Here's the best of the best:

Most of the items on the list are very expensive - $1100 washers and dryers? For that much money, you can buy TWO lesser models and keep them longer.

Bogle wine? Not a bad wine, but for less money, you can get better value.

I would put Consumer Reports right up there with Smithsonian Magazine - a bunch of B.S. peddled to confused oldsters.

Consumer Reports are just one man's opinion, not objective engineering evaluation of a product. And in terms of life-testing, they do none, as they cannot afford to.

So you buy your $1000 LG washer and five years later it needs a $500 repair. Now what? CR didn't see that coming, for sure. How could they? They just push the buttons on a new one and look at "features".

If you want a good value on a washer and dryer, look on Craig's List for a used one, about 1-2 years old. I used to buy GE washers and dryers for $100 to $200 the PAIR this way. They would last five to ten years easily, and after that, you just haul them out to the curb.

Most appliances today cost more to repair than to buy, so it makes no sense paying a lot of money for them, just so you can have a "delicate" cycle.  The cost of one repairman's visit often exceeds the value of the appliance at that point.  It makes no sense to buy high-end appliances, as a result.

Granted, these new "front load" washers look pretty cool, particularly if you have a "look at me!" laundry room, instead of a dank basement or garage for doing laundry.   And they do use less water, which is important if you are on a well, as we were in New York.

But a basic GE washer and dryer, brand-new, can be had for about $500 each, or about half the price of these fancy stainless-steel jobs, and it will do your clothes just fine.  And likely it will last as long as the $1100 machine, and when it breaks, you chuck it, without having a financial and emotional commitment to it.

Best Coffee maker in the world: a dented stove-top aluminum perker that you can get at the Salvation Army for 79 cents.  $179 for a coffee maker? Insane. And yea, I've been there. I drink tea now, 2 cents a cup.   See: http://livingstingy.blogspot.com/2010/05/cheap-coffee-makers-best-kind.html

Second best are the $15-$20 el cheapo models you can find at drug stores or Wal Mart.
Paying a lot for an expensive coffee maker does not mean better coffee or that it will last longer.
In fact, usually the opposite.

The "grind and brew" makers are particularly problematic, as if one aspect of the machine breaks (the grinder, for example) you have to chuck the whole thing.   Better off buying a simple Braun grinder (I have three, they never wear out) and a cheap coffee maker or french press.
And yea, I've fallen into the trap - on more than one occasion - of thinking that "upper end" appliances were all the bomb.  But from a financial standpoint, they are never a good bargain.  BTDT!  See:  http://livingstingy.blogspot.com/2010/05/grand-turbo-2500-gas-grill.html

And yea, you might say, "Well, I'm making $100,000 a year!  I can afford bling appliances!"  And maybe you can, but then again, maybe you are living "paycheck to paycheck" on a hundred-grand a year and can't figure out why - but you have the stainless-steel appliances you believe you are "entitled" to, right?

The secret to real wealth - accumulating wealth - is not to live up to your paycheck, but to live down to a poorer person's.   And in America, you can have a very good standard of living making as little as $50,000 a year.  If you make $100,000, then bank the difference, retire early and be wealthy.  The alternative is a never-ending string of payments for crap, and retiring broke.  And I've seen this happen to people here on retirement island - living large and retiring on squat.   It ain't pretty!

I guess what is disturbing to me about Consumer Reports is that it has morphed into a magazine and organization that promotes consumption.   The best thing a consumer (human being) can do, to save money, is to consume less, not more.  CR has lost its way, philosophically.

So, back in the day (e.g., the 1960's), they might have said to buy a Dodge Dart, instead of a Plymouth Barracuda or a Chrysler Imperial, as there is little to be gained by owning a muscle car or a "luxury car" other than to impress other people.  The Consumer Movement of that era was more about saving money, not spending it.

Today, they have categories for evaluating the best muscle cars and luxury cars (as well as SUVs) so that the idea that such propositions might be bad deals from the get-go is not even discussed.   So rather than "less is more" the new mantra is "More is better!  Consume!  Consume!"

It seems that they are promoting spending more on "bling" than on being a smart consumer.   And this is sort of the opposite of where they should be, no?

But then again, I have trouble with the whole "Consumer" mentality in America - calling people "consumers" instead of "human beings", for example, or calling our economy a "Consumer Economy", with nightly reports on "Consumer Confidence" and the like.

This Consumerism is what got us into trouble in the first place.  And Consumer Reports seems to be cheer-leading the way, these days.

"You may not know this but in most other countries people do not prefer to buy top loading washers for the following reasons:
- They use a lot of water and electricity
- The agitator wears out clothing more easily
- They hold less capacity than equivalent front loader due to the absence of an agitator taking up space in the washing bin.
Front loading washing machine on the other hand:
- Uses less water and electricity.
- More efficiently distributes washing powder through the tumbling action, which allows clothes to rub against one another and actually clean the clothes, as opposed to a front [sic] top loader if you overfill, the items of clothing at the top of the washing bin may not ever get sucked into the water and agitated.
If they were inferior why are they used in industrial laundromats?
The mold issue you refer to only applies to a number of front load washers in production before around 2004 i believe. People just leave the door open when the washer is not in use anyway.
I have an Miele front load washing machine which is tested to the tolerance of 20 years and has no LCD display or membrane buttons.
You are right about the fridges though."


All that is true - (and yes, I was well aware of these arguments) and when we had our house in NY with a very limited well water supply, we had such a washer and it worked well.

BUT IT WAS THREE TIMES THE COST of a regular top-loader (it was about $1000).
And I would have rather had a better well (or city water) than an expensive washing machine, quite frankly.  And no, it didn't wash clothes better than a regular one and the capacity wasn't larger.  If you fill those front-loaders with clothes, they will not wash well.
The arguments about soaps and the agitator "wearing out clothes" are non-quantifiable.   We've had top-loading washers for more than half-a century now, and well, I am not seeing "clothes wearing out" as being a major issue over the last 50 years.  It does sound a lot like an argument a washing machine company would use to sell a washer to you, though.  And it is an argument than cannot be refuted, due to its nebulous nature.  So I think we have to throw that one right out, along with the "overloading" argument.
As with anything, you have to look at overall cost and effectiveness.  The cost-savings in Energy and Water usage are not offset by the increased cost of the machine.  In the US, water is very cheap, so that is almost not an issue at all.  As for energy?  We are talking  pennies, if that.

Yes, you can even buy a cheaper toploader washer at $299.   That model has an EnergyStar rating of $52 a year, and no doubt that is the model the front-end loader people want you to compare to, when making the decision.  However, even with that energy-guzzler, you are talking about a savings of $630 over a 15-year design life, and a cost delta of $500.  The payback in energy costs is a staggering ELEVEN YEARS.   And for $100 more, you can buy an Energy Star compliant model that will actually save money.

And the big problem is this:  When they break down after five years, the cost of fixing them exceeds their value.  So many folks don't end up getting a full 15-year design life out of the machine.

A friend of mine bought one five years ago and it broke.  Cost to repair was more than the value of the machine.  She bought a new top-loader for $300.  Problem solved.

I think you are "invested" in the idea of the expensive washing machine you bought, and thus feel the need to "defend" your investment.  It wasn't just an expensive toy, right?  No, it made financial sense!

And yes, people do show off their fancy washing machines to their friends.   I know I did it when I had one.   But that was pretty freaking stupid!

Sorry, but no sale to unnecessarily complicated appliances.  I guess if I lived in a place where water was expensive, or I was on a well that ran dry a lot, maybe it would "make sense".   But then again, a better approach is to ask yourself why you are living in places where water is expensive and wells run dry.

Sorry, but no sale.  It is chasing technology for technology's sake.   Our lives are complicated enough as it is....