Merry Artists, or How We Spent Thanksgiving 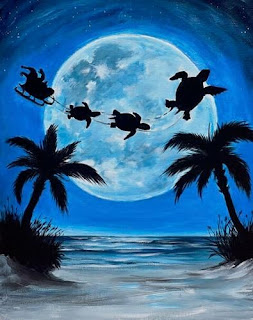 Holidays get a bit predictable after a while. Try something new!

I noted before that I am not a big fan of holidays for a number of reasons.  My childhood was marred by unhappy holidays - they were viewed by my Mother as a test of her homemaking skills, and no matter how "perfect" the holiday was, she always felt she came up short. Drinking and arguments would ensue.

They're also boring as all get out.  Thanksgiving in particular is so predictable - the same foods, year after year, including the incredibly difficult-to-cook turkey (which takes hours and makes a huge mess) and the football games, parades, and then the hanging out with relatives.  Most people secretly wish they could do something else.  And they could, too - they just see it no other way.

That is why, I think, in part, why "Black Friday" became so popular.  People were like, "Oh, God, I will do anything to get away from my family!" - so they go shopping.

Throw in the second-busiest travel time of the year, with crowded roads, airports, hotels, restaurants, and what's not to like?  The model of "Hey everyone!  Let's all do the same thing at the same time, so commercial interests can make big profits!" is just dumb.  Time-shift.  Go off-season.  Pick a different day.  There is nothing magical or special about the last Thursday in November.

And what are we celebrating in particular?  The Puritans?  We euphemistically call them "Pilgrims" but they were not making any sort of pilgrimage - they came to a new country to practice their backward form of strict fundamentalism.  They screwed over the Indians who tried to help them, and then once they got established, started hanging people for witchcraft.

You know what?  Screw the "Pilgrims" - they are not really even a major part of the American story, but rather a tiny footnote of a settlement in Massachusetts.  If you really wanted to honor European invaders of the New World, there were plenty of other settlements up and down the East Coast of the US that would probably better qualify.  We don't celebrate the Dutch settling in "New Amsterdam" - what is now New York City - do we?  The whole "Thanksgiving" holiday smacks of being made-up, and indeed, it was - by Abraham Lincoln.

This time of year is a busy one for Mark - 12-hour days volunteering at Goodyear Cottage for the annual "Merry Artists" show and sale.  It started a few years ago when an artist cancelled their show for December at the last minute.  Mark and others pitched the idea of having a show and sale for all of the Arts Association members.   We do get a lot of tourists this time of year, and they are often looking for inexpensive items ($5 to $500) to give as gifts or for themselves.   Well, the first year was a big hit, so they decided to make it an annual deal.

Problem is, there are literally hundreds - even over 1000 - items for sale.  Every item has to be logged into the system and a bar-code price tag attached.  And then it all has to be displayed so it looks good and not like a "garage sale" as some would say.  An army of volunteers helps with everything, and Mark uses his retail skills to make it look appealing.

So, for several days he has been working.  First, the old show (the weaver's guild) has to be taken down and then everything removed from the "shop" (where member's wares are sold year-round) and the entire building reorganized as one giant store.   He is fortunate to have a lot of good volunteers to work with, who work like dogs for days at a time and still keep their good humor.

Well, it's all done.  And it looks great.  My job was mostly to stay out of the way.  I went after-hours and installed some track lighting and I went one day and brought Mark some lunch.  But it's his deal and it's best if I stay out of it for the most part.  Besides, I'd probably piss someone off.  I'm pretty good at that!

The show and sale starts tomorrow, so the place is closed today.  We went over and had tuna salad sandwiches and I cut down some old bar stools that we salvaged from a restaurant here on the island.  They wanted them for the pottery shop (studio) but they were 6" too tall.  An easy fix with a battery-powered circular saw!  It was quiet, just the two of us, and the occasional curious tourist on a bicycle, cruising by.  It really is a low-stress way to spend the holiday.

We did get invited to someone's house to spend the day eating turkey and whatnot, and it was kind of them to ask.  But after several days of backbreaking work, Mark just wanted to relax and chill out.  It's more our speed.  Maybe it is closer to the real meaning of Thanksgiving than turkey, football, and shopping.

And no, he wasn't in the mood to spend hours cooking a turkey.

It's funny, but we have friends who are doing the traditional bit, and they don't seem happy with it.  One friend had their stove die the day before Thanksgiving!  Talk about stress!  But a kindly appliance repairman fixed not only that, but their dryer as well - for cheap, too!  Another friend has an out-of-town in-law coming to visit who, without fail, will complain about everything from the food to the decor to how lumpy their mattress is - and start some sort of argument with a sibling or parent.  Without fail.  Every damn year.  Why do people torture themselves like that?

The funny thing, I think, is that I meet so many people who feel they have to do certain things at certain times of the year.  They let society and tradition lead them around by the nose.  "I have to do this!  Everyone else does!" and they get very scared when you suggest there are other possibilities.  Some folks go so far as to marry someone their parents picked for them or follow the career path their parents selected.   They concept of "free will" seems alien to them.  I guess most people are sheep.

Maybe some year we will do the traditional Thanksgiving thing again.  We have in the past, and it can be a lot of fun.  But then again, it can also be a pain-in-the-ass and if you aren't having fun, why do it?

One year, Mark invited some friends over and served turkey tacos with stuffing and gravy and a little cranberry as well.  Actually, they are pretty good.  Some of our friends were not amused - they wanted Big Tom Turkey and "all the fixin's" laid out on the table.  It was like we had renounced God or something.  It is funny how orthodox some folks can be.

The holidays are what you make of them.  There is no rule saying you have to do this or you must do that.  It is all up to you.  And if you are busy doing other things, why stress yourself?

P.S. - We found hundreds of feet of lighted garland (LED no less!) in a dumpster behind the club.  We cleaned it up and threw away the broken (unlit) strands and ran it all around the house.  So before anyone accused me of "Bah! Humbug!" I did decorate the house for our "festival of lights."  So there!