Past, Present, and Future (The Discourses) 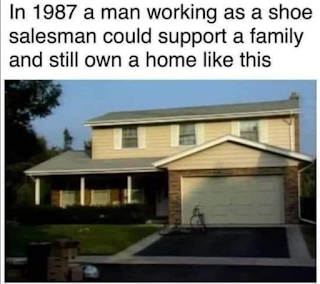 Why is it we look back at the past with rose-colored glasses?

There is a lot of talk about how rotten things are today and how we need to "go back to the good old days" when things were better.  It is not a right-wing or left-wing thing, either.  Young leftists opine that in the "good old days" a guy working as a safety inspector at a nuclear powerplant or as a shoe salesman, could support a family while his wife stayed home, and they could afford a nice house with a two-car garage.

A nice fantasy, but Homer Simpson and Al Bundy were fictional characters.  Yes, people lived a different lifestyle back then - Mom worked at home and "daycare" didn't exist.  And women had no place in the workforce, other than at clerical jobs where sexual harassment was a norm, not the exception.  If you want to watch more accurate fiction about "the good old days" try Shirley MacLaine and Jack Lemmon and Fred McMurry - the latter of which playing against character as a sexual predator - in The Apartment.  No, really.  But that was more realistic than The Simpsons or Married, With Children.

And quite frankly, I think these "memes" and postings about how great it was back then are put-up jobs by our friends at the Internet Research Agency in Russia.  But I digress.

Oddly enough, the far-right has the same fantasy - but for different reasons.  They actually want the reality depicted in The Apartment, where women can be victimized by men in power, and the gays are in the closet and the blacks are delegated to menial jobs.  To them, that was paradise - being a white, straight male meant you got jobs and promotions and could take advantage of others.  Why not go back to that paradise-on-earth?

Of course, it wasn't all fun-and-games, as one reader pointed out.  Back then, even if you were a white guy, you were still a slave to the corporation.  One step out of line, and you were fired - and no one else would hire you.  At that point, you were no better than the secretary you impregnated, who had to get a back-alley abortion and could no longer marry a "good" man.  You were soiled goods, and maybe you could get some sort of crummy job where they didn't check your references.

This bifurcation of "good old days" remembrances illustrates how the far-left and far-right are no so far apart.  A lot of the people who supported Trump were hoping for a return to the days of high-paying union jobs - and they didn't care so much for right-wing politics.  They switched from Bernie Bros to Trumpians in a heartbeat, because they perceived this "good old days" mentality as being good.

But this is hardly a new thing.  It goes back ages - to the dawn of civilization.  I am sure some cave-man complained to another about how awful things are.  "Back in my day, we didn't have these fancy things like fire or the wheel - and life was better back then!  Kids today - they are so spoiled by these modern conveniences!  When I was a kid, when it got cold, you huddled under a Mastodon hide and shivered!  None of this "light a fire" crap! Laziness, I swear!"

I was reading this book about Machiavelli, and it is interesting how he has been misinterpreted over the years.  Some claim he is this heartless bastard who advocated for scorched-earth governance.  Others claim he was "just misunderstood."  The reality is, he wrote two works of note, The Prince - which discusses how monarchs should rule (ruthlessly) and The Discourses which discusses how a Republic should be run.  In the latter book, he noted that people always find fault with the present as,

"human desires are insatiable, because nature has given them the capacity and possibility to desire everything, but fortune has decreed they can only attain little.  The result is a never-ending lack of satisfaction in people's mind and a weariness in what they have attained."

So people find fault with the present, praise the past, and live in anticipation of the future, "even though they are stimulated to do so by no reasonable cause."

Reading this, the words jumped off the page.  What we are experiencing is nothing new, and our life experiences have been thought about and pondered for ages before us.  We like to think our civilization is young, and that our technological advances make us better than the primitives of the past.  But perhaps the opposite is true - we are more superficial than ever before and lack any kind of introspection and reflection.

Well, maybe that isn't true entirely.  Maybe back in Machiavelli's day, only a few people could read and write or be wealthy enough to sit around and contemplate life.  And bear in mind, The Discourses is an analysis of earlier writings of Livy that go back over 2,000 years.  This is nothing new.

The difference is, today, everyone can spout their opinions on the Internet (myself included) and thus we have an avalanche of bullshit and misdirection to wade through.  And thus, we have  new generations of "ain't it awful" philosophers who pine for the good old days - from any political perspective.

Wanting so much and being unhappy with what we have, we end up depressed.  We fail to appreciate that these are the good old days and should be enjoyed for what they are, not what they theoretically could be.  Because humans are inefficient - they operate at an efficiency of 2% or less, in my estimation, and that's on a good day.  They are constantly shedding skin cells, they have to poop and eat and do all that pesky breathing.  They are very high-maintenance machines, very fragile, and hard to motivate.

But that 2%, over time, you'd be surprised what it will accomplish.

And maybe, right there, is the secret to success.  Unsuccessful people mope about and get depressed because "everything is awful" and "the old days were better."  It is an attitude that causes depression and accomplishes nothing.  And not surprisingly, it is an attitude fostered by the media, which wants to keep us depressed so that we buy more of their crap, hoping to cheer ourselves up.

You can see how this works.

The "good old days" did not seem so good at the time.  World wars, depressions, threat of nuclear annihilation, energy crises, Watergate, the Vietnam war, stagflation, dot-com crash, housing crash - each era has its own share of troubles, and in fact, our present era is merely an extension of these.  While the present may seem bleak, it seemed just a bleak to a previous generation - going all the way back to the dawn of time, as Machiavelli's writing illustrates.

Don't be taken in by this "good old days" nonsense - it is an invitation to depression and learned helplessness.  Once you posit that you are a victim of greater circumstances, you stop trying and eventually your prophesies of doom-and-gloom become self-fulfilling.