Hitting a Nerve? Or Just Riffing? 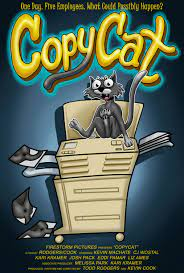 There are a lot of copycat blogs out there that invoke the name of this blog.  Why is this?  Hitting a nerve, or just getting hits?

I try to cite to earlier postings (nearly 5,000 of them - when will I shut up?  Not soon enough for most!) when I talk about a topic.  And finding these postings is hard to do, as Google makes it hard to search within Blogger.   But if I use Google itself, a funny thing happens.... I find a lot of sites talking about "Living Stingy" in a number of ways.

What is frustrating is that the first two hits on Google are usually from my blog, but then there are several more from these various shitblogs hoping to get a click.   It is hard for me to search my own blog these days!

The first type are the garbage sites - they take portions of my postings and re-post them, hoping someone stumbles upon their shit-blog and scores then a tenth of a cent in Google AdSense.  Others merely use the term "Living Stingy" to attract viewers, and often their take is, "It makes no sense to be stingy - spend all your money NOW and as quickly as possible!" which probably resonates with the majority of Americans who want to do just that.

In a way, I am kind of flattered - I mean, my little old blog is frightening enough that they have to riff off it?  Do I get that many hits?  That many readers?

Perhaps, but then again, perhaps not.  Maybe the shit-blog people just cruise the Internet and copy the name of every blog out there and then tack on some text-farming and then hope for some hits.  It isn't hard to do, and I suspect it could even be automated.  Monetize the blog and hey, if you even score a few dollars per blog, it adds up to a nice meal in Bangalore.

Others just piggy-back with text farming nonsense - stuff that says something without saying anything.

They wouldn't use the term unless they thought it would generate hits.  Imitation is the sincerest form of flattery they say.  So I guess I should be flattered.

But please bear in mind that I am NOT affiliated with any of those shitblogs or text farms out there that are hoping to SEO off my blog.  And I am NOT on Facebook, despite some folks linking to some of my pages.

The Internet had such great promise.  But then humans did their usual thing and screwed it all up. And gaming the system is a very common thing that (lazy) humans do, it seems.....