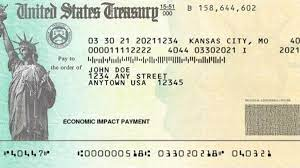 Your stimulus check may be delayed for a number of reasons.  Don't panic.

I noted before you can check the status of your stimulus check online with the IRS.  My two previous "checks" were direct deposits to my checking account and came on-time.  This time around, they said they would deposit the money to the same account, but then for some inexplicable reason, changed their mind and said a check would be mailed on April 2nd.  Well, that was then, it arrived today, ten days later.  Thank you Mr. DeJoy!  Keep up the good work!

I examined the check carefully and it appeared to have some water stain on it or a wrinkle of some sort.  Something went wrong, somewhere.  I looked into this and the Department of the Treasury has a high-speed check printer in Kansas City that spews out 10,000 checks per hour.  They are then cut and sorted and send to Edna, who has been working there since 1967.  She puts each check in an envelope and licks the flap and then puts it through a Pitney-Bowes postage meter.  On the way home from work, she stops by the post office near her house and puts 5,000 envelopes in the night box.  This takes time.

The "economic stimulus" is actually a tax credit and your check is an advance on that tax credit.  If you don't get the check, don't worry.  There are ways to check on the status of the check or even track it, but don't get your hopes up - the IRS is discouraging people from calling and the folks who answer the phone really can't help you.  You can ask for the tax credit ("Recovery Rebate") when you file your tax return next year.  Hopefully, you won't have to wait until then.

In terms of free money, the Democrats are pushing through a bill to establish a commission for "slave reparations" which I am all in favor of.  Anyone living today who was enslaved should be eligible.   Is the Lincoln proposal still on the table?  40 acres and a mule?

Yes, I know that sounds racist, but as I noted in an earlier posting, trying to pay people today for ills visited on their parents, grandparents, great-grandparents, and great-great-grandparents is fraught with peril.  We also raise the ugly specter of having the government determine who is black which sounds pretty obvious until you realize a number of white people have been passing as black and if there is money on the table, I presume a few more might try it.

Then there is Obama.  Half-black or half-white?  Or is it just obscene to look at people like breeds of dogs or use Holocaust-like standards like "one drop of blood" or "one great-grandparent" or whatnot.  And in Obama's case, well, his Father was black - but from Africa and never enslaved in the United States or elsewhere.   Does he get a check, too?  Or are the reparations for other things besides slavery?

It is a slippery slope and right off the bat, it brings up the issue of Indians, or Native Americans, or Indigenous Peoples or First Nations Peoples, who also got a raw deal - slaughtered and moved to reservations and treated not as second-class citizens, but not even as citizens. When do they get reparations?  The casinos?

And Asians - under attack today and in the past.  The Chinese exclusion act.  The unjust internment of Japanese during WWII (a reparation was made for that - it was lacking, and only applied to living survivors).

And what about Hispanics?  They've had their share of discrimination and abuse as well.  Every immigrant group has, to some extent, although not as bad as the black folks have had.

What about Gay reparations?  Sure, why not?  My great-uncle shot himself in the head after he was arrested in a gay bar in Manhattan in 1948. They published his name and photo in the paper, which destroyed his life.

I am not being facetious here - there are horrific things great and small that have been practiced on all sorts of minority groups.  The Jews?  They've been beaten down again and again - even here in the United States.  Roosevelt sent back a shipload of Jews who were fleeing Nazi terror.  They were all murdered in a death camp.   Shouldn't there be reparations for that?

Now granted, the impulse for these reparations comes from a good place - people want to "do right" by others and right historic wrongs.   Well, I hope that is where it is coming from and it isn't just a cynical ploy to buy votes - or worse.

Yes, worse.   The "Slave Reparations" canard has been flown for decades now, and each time it seems it might get traction, the Democrats lose the House or Senate or the Presidency, and the whole thing gets shoved to the back-burner.  So maybe it is "safe" to talk about slave reparations and establish a committee to look into it, but whose findings won't be available until after November of 2022 - when the GOP takes back the House or Senate and buries the thing.  The Democrats can then use the issue to "get out the vote" in 2024 and start the whole thing over again.

And maybe there is a quid pro quo with their Republican colleagues, as the GOP realizes that "Slave Reparations" will get out the conservative vote - even for odious candidates.  And maybe the parties play this game with us - using these "social issues" like abortion, transgender rights, or whatever, to win and lose House and Senate seats.  Over time, nothing gets done - through legislation.  Recall it was a conservative Supreme Court that legalized gay marriage, not the cowardly House or Senate.

Maybe I am just jaded.  But it seems plausible to me.  These politicians stir the pot not to get things done, but to create controversy and heat and get everyone riled up and anxious, so they'll send in their $20 checks to the re-election committee or whatever.  You have to keep the rubes engaged.  And nothing engages them more than telling them their guns are going to be confiscated or whatever.

So no, I am not too worried that "Slave Reparations" are going anywhere.  So don't start picking out a new car or anything just yet.  On the other hand, maybe it is time to dust off that genealogy search your Aunt Sally did back in day - and explore those branches of the family tree that she inexplicably didn't research.  You too, maybe eligible for reparations!

I am sure it will be done.  You can bank on it.  Pun intended.