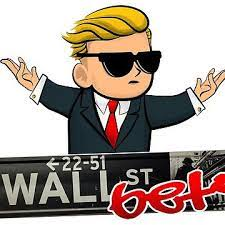 The market and the economy seem to be in disconnect - cognitive dissonance if you will.  On the one hand, people are out of work due to CoVid.  Folks are facing foreclosure and eviction, which is being stayed by government action.   The Federal Government is giving away money as fast as possible, and extending unemployment benefits (and padding them as well).  Meanwhile, "help wanted" signs are popping up like spring flowers everywhere - with no one applying for the jobs.  Oh, and inflation is rearing its ugly head, in direct response to the fire hose of money coming from the Treasury.   The deficit and National Debt are skyrocketing.  What the heck is going on?

Well, in 1928 things weren't much different. The underlying economy was weak, and farmers were going bankrupt.  But in the cities, everyone was making money in the stock market!  Buy stocks - any stocks! - and you'll be a millionaire in no time.  It sounds like what is going on today.

It is illegal - or was, anyway - to trade based on insider information.   It used to be illegal to run a pump-n-dump operation.  The latter was a pretty simple deal.  You buy up a cheap stock and they hype the crap out of it to unsuspecting yahoos, much as they did in that movie, Wolf of Wall Street (which was more about a small-time shady dealer from Staten Island than Wall Street).   The suckers (ahem! clients) buy the stock, which drives up the price - making you look like a freaking genius investment advisor.  You now sell your shares, as they have doubled in value, and the whole thing collapses.  You then leave town.

The Internet has made this even more lucrative.  I noted before how a teenager in New Jersey worked this scam, by mass e-mailing his "stock picks" to millions of people.  The incremental cost of sending out this message is basically zero.  No phone banks or boiler rooms, no faxes, no postage. You can SPAM the whole world for a few dollars.  And apparently he made a lot of money at this, so much so that when the SEC caught up with him and fined him, he just laughed and whipped out his checkbook.

The SEC isn't very proactive in going after these scams these days - thank your local Republican "small government" and "deregulation" Congressperson.  Yes, some regulations are stupid.  Government does get bloated over time.  But the regulations of our banking industry and investment system are there for a reason - a reason we seem to revisit every 10-20 years it seems.

Today, sending out e-mails seems almost quaint.  You can pump-n-dump through social media.  Elon Musk sends out a tweet saying he is selling the company for $420 a share and the stock price skyrockets.  He sends out another tweet saying he is buying Bitcoin, and the price spikes - putting Billions in his pocket overnight.  The SEC fined him for the former as he was hyping his own stock price and moreover, the "buyout" appeared to be a marijuana-induced fantasy.   But so far, no word from the SEC about hyping Bitcoin, perhaps because they don't view Bitcoin as under their purview.

Others have gotten into the game.  Celebrity "influencers" mention a product, company, or investment, or indicate they are investing in the item in question, and the price bumps up. Sooze Orman inexplicably states one day that she is now interested in Bitcoin (oddly enough, around the same time Musk made a big purchase of it - coincidence, I guess).  All it takes is one mention on social media, where "influencers" have millions of followers, and you can manipulate the market.  And while this might not sound as sexy as sending out twenty-million e-mails, bear in mind that the e-mail approach has a very low response rate.  "Followers" of an "influencer" are far more likely to respond.  Social media is much more toxic.

Then there are forums, like Reddit's aptly named "Wall Street Bets" (which appears to be manipulated by the "Robin Hood" people) where "people" post messages claiming they made millions on such-and-such a trade, but more likely are "what if?" scenarios based on historical data.   But since those early days on Reddit, some folks have hijacked the site to promote specific stocks and brigade-buying of shares.   They post fake messages from "users" saying things like, "I'm buying GameStop and holding on to it forever!  It has no place to go but up!"

And yes, it does go up, when hundreds of thousands of people start buying the stock, and panicked short-sellers lose Billions in the process.   But... this is not a long-term trend, just a blip on the radar.  The whole thing was based on screwing short-sellers, who will quickly learn not to short that stock anytime in the near future.  It doesn't mean GameStop has found a miraculous new way to make profits. It is the Blockbuster Video of gaming - an obsolete brick-and-mortar business that has already been replaced by online buying.

Then there are these SPACs - Special Purpose Acquisition Companies - which bypass all the regulations of the SEC normally applied to IPOs, by starting a company with no stated purpose and then doing a reverse merger to take a privately-held company public without having to do a messy IPO.  People invest in these things because a celebrity investor is behind it.  "Celebrity Investor is really smart!  So he'll make lots of money for me!"  But the deal is, he is investing to make money for himself, using your money to do so.

Which brings us to China.  Many of these SPACs are being used to take Chinese companies public, without having to do all the messy disclosure necessary for an ordinary IPO. As many Chinese companies have found out the hard way, if you want to list on the NYSE, you have to disclose a lot of information, and the Chinese banking and investment system is notoriously opaque, with many companies keeping debt "off the books" in order to make the company appear more profitable.  Hey, they probably learned this from us - and the ENRON debacle.

But the problem with China goes beyond that.  The trade-war that Trump started - and still goes on - is going to get worse.  China is flexing its muscles - muscles that we helped them build by bringing Capitalism to their economy.   Already the Chinese government is making noises that it is "unpatriotic" to do business with Western countries that don't kow-tow to the Communist party line.  And it can be stupid things, too, like where lines are drawn on a map, or if you slip-up and call Taiwan a "country" or even imply it is sovereign.   The Chinese people know all-too-well what happens to citizens who are not patriotic.

So where would that leave us if American companies did a mass-exodus from China - or were forced out?  The Huawei 5G debacle is only the tip of the iceberg.  And my suggestion is not to travel to China (among other places) as Westerners are being taken hostage there.  It is sad, too, as not that long ago, you could safely travel to places like China, and Russia.  Now it is like going to North Korea or Iran - you end up as a pawn in an international game of chess.

But given all that, it is amazing that the stock market continues to go up and up.  Is there really a "there" there, or are we all just deluding ourselves and priming the pump with wild-eyed fantasies?   It concerns me as I have been through this many times in my life.  The real estate bubble of 1989 was my first taste, and that wasn't so bad, although I had friends who had to bring money to closing in order to sell their homes.   We repeated it on a larger scale in 2008, this time bankrupting investment firms, banks, and many small-time "investors" who got caught up in the hype, but apparently didn't own a calcualtor - or even a pencil.  There are a lot of people today who are still "underwater" on homes they bought back them.

And stocks?  They have peaked and crashed a number of times in my lifetime.   Everyone jumps on the bandwagon of "The Next Big Thing!" - usually some tech stock deal - and it doesn't quite pan out as expected.  In some cases, these companies were never making any money and never had any plans to - they just wanted to do an IPO, cash out and then evaporate.  Pets.com

This is not to say that all of these were bad business plans, only that the companies in question were wildly over-valued.  Pets.com never made a cent, as they were selling products for below cost and then blowing their capital on Superbowl ads (and maybe hookers and coke, from what I hear).  Today we have Chewy.com which is the same (or similar) business model, but at least making a small profit - which seemed to shock the industry.  Hey, this is the Internet!  You're not supposed to make profits!

Inflation is the thing that concerns me most of all, though.  The price of things in general are going up, up, up.  It wasn't that long ago you could go out for lunch for two for $25. Today it is $50 and up, and people are paying it with the funny-money from the government.  Shortages of key materials such as building supplies and microchips are cropping up, shutting down or delaying production and products and driving up prices.  Lumber is supposedly up 80%.

A neighbor took their house off the market as the builder for their new house told them it may be more than a year before he can even start building.  I suspect he wanted out of the contract as it was no longer profitable with the price of lumber being what it is.   Another neighbor has a bathroom remodeling project extending months, as basic things like shower enclosures and cabinets are all on back-order.   Everyone is staying at home and realizing their homes need fixing up.  Also, the funny-money checks are found money to most - why not remodel the bath or put in a skylight?

Inflation is a natural occurrence when you print more money.  We've seen this in the past in Wiemar Germany, in Peron's Argentina, or today in Maduro's Venezuela.  It also is the natural response to increases in raw materials or imported goods that are essential to the economy.  The Arab Oil Embargo of 1973 doubled the price of gas, and too late, we realized that we needed gasoline (or diesel fuel) to make and transport every damn thing in our economy.  Prices shot up, so workers demanded bigger raises, which raised prices even further.  Today, it might not be crude oil that is embargoed, but with the trade war and shortages of microchips, the price of goods could skyrocket as they become scarce.

I hope I'm wrong.  Maybe it will be like postwar America in the early 1950's, where pent-up demand lead to a decade of prosperity before it all came crashing down in 1958 - and we avoided a post-war recession.  Maybe.  These things go in cycles, and we've been overdue for a correction for a long time.

And the longer we go without a correction, the worse it will be.  Again, like a rubber-band being pulled back - it will snap that much harder, the longer it keeps being stretched.