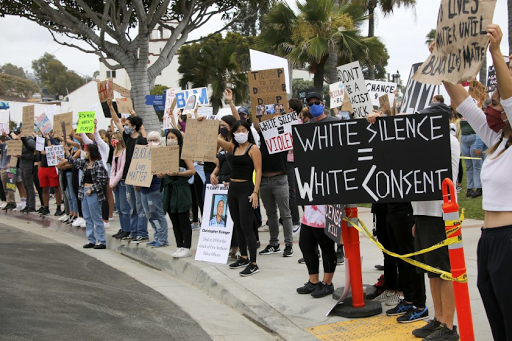 You can't win elections by telling voters they are worthless pieces of shit all the time.  The masochist demographic just isn't all that large!  Another BLM protest without any Bs!

A recent article online cites a study that opines that when people are presented with a policy proposal they are less likely to endorse it, if it is couched in terms of racial justice.  This is not to be unexpected.  People get tired of issues after a while, and many Americans, I think, are already getting fatigued by racial justice arguments.

Not everything is racist. And not every incident that involves a "person of color" or other minority, is a result of racism.  Yes, it is possible that just like everyone else, people of color can sometimes be responsible, at least in part, for their own plight. The narrative that some would like to sell us, is little more than externalizing.  You are a victim of racism!  So don't bother trying - "the man" will just strike you down, anyway.

Not only is this an unhealthy message to give to people, it is one that is resonating less and less with the 70% of the population in America that is white (not being replaced anytime soon!).  People are tired of the implication that any success they have in life is somehow predicated on their exploitation of minorities. This whole narrative of "money batons" for example, is just guilt politics and a false narrative as well.  The vast majority of Americans, white or black, didn't receive any inheritance from their parents or grandparents.  As I noted before, the greatest legacy I got from my ancestors was this antiquated notion that hard work was a good thing, getting an education is even better, and improving yourself and your life - and the world - is not a bad thing.  Today, we call those values, "oppression".

But the real risk in all of this is losing elections. You can't win elections telling people they are worthless pieces of shit and responsible for all of the world's problems.  And that is the unstated - or often explicit - reasoning provided by the Left, in many cases.  Whatever the issue is, whether it is national or international, the underlying narrative is that the United States is to blame, and in particular, greedy white people in the United States. Unrest in the Middle East?  Probably due to our support of Israel or our consumption of oil.  No one else is to blame, not even the people who live there or rule there.  Global warming?  Our fault, of course - but we won't talk about the massive pollution from China - they're a developing country! (and not the world's second-largest, soon-to-be-largest, economy).

And of course, racism - that's our fault, too, even if you support the NAACP and march in a BLM protest and support affirmative action.  The best thing you can do, as a white person, is to just off yourself and leave more room for BIPOC and LGBTQ+ persons in the world.

OK, you say, that sounds over the top - it is the message people are getting these days, and a message that will result in a resounding GOP victory in 2022.  People get tired of being told that everything is their fault - people who get up in the morning, go to work, support their families, and never say the N-word or join the Klan or hurt anyone else.  Yet they feel they are being blamed for the world's problems.

Like clockwork, the first person to come along and tell them they are "beautiful" and great, such as Hitler or Trump - will get elected. People respond to positive messages, particularly after being cudgeled for so long.

I said it long before Biden was elected - Democrats will screw up a wet dream.  The far-Left has taken recent election victories to be an endorsement of their radical policies, when in fact, it was a renunciation of Trumpism and the insurrection. Things like Statehood for DC (which will likely die in the Senate - another grand gesture), slave reparations, and the constant hammering that every damn thing that touches a black persons' life is racist is just getting old - and real fast.

We will lose the election in 2022, and Biden will find himself painted into the same corner as Obama before him - limited in power to little more than Presidential decrees, or trying to negotiate with an opposing party that will do anything to deny the President a "win".   If you thought racism is a problem now, wait until 2023, when it all comes undone.

It also is damaging to black people as well.   Yes, we need to reform police procedures - people getting shot in the back is inexcusable.  But then again, running away from the Police is a bad idea as well.   Unfortunately, this hyper-racism argument that is being made today is giving a lot of people an excuse to simply give up trying.  It allows people to externalize their personal problems into political ones - and we already have far too many people doing that already.

Nothing is your fault - and until the world is a perfect and "fair" place, there is no point in trying to get ahead.   But a funny thing - people do manage to get ahead in the world, despite the odds being stacked against them.  They succeed in spite of unfairness.  Do they have it as easy as others?  Do they succeed as far as others who have other advantages?  No, but they do better, because they realize that "fairness" never exists in any time or place in the history of the world.

Oh, and one more thing - the world is a helluva lot more "fair" today than it was 10, 20, or 50 years ago.  Yes, it is shameful that Police have been caught out by cameras - body cameras or cell phone cameras of bystanders.   But at least we are finding out about these things and actions are being taken.  50 years ago?  The same things happened and people got away with it.  "Resisting Arrest" they called it - and you could be beaten up or even shot.   We are seeing progress.

But to hear some tell it, things are actually regressing.   It may seem that way, but I think it is like when you start testing for a disease - the test results skyrocket initially, as people get tested and we realize - for the first time - how many are infected.   And if nothing is done, infection rates will continue to go up.  But something is being done and change is in the air.  We need to embrace that and see it as progress, not a regression.

Sadly, many of these organizations are predicated on a model of continual outrage. No matter how they succeed in advancing their agenda, there is always a new goal, further down the football field.  Organizations take on a life of their own.  The NRA wins nearly every battle it has fought - so now they argue for guns for toddlers or some such nonsense.  Gay marriage is legalized, so the gay rights groups have to find more and more obscure sexual minorities to champion - and more outrages that need to be addressed.   In a way, it is a never-ending deal.

The article cited above didn't surprise me one bit.  It is not that people are necessarily racist, only that they are experiencing racism fatigue - this idea that there is a racist under every rock, and that "silence is violence" and unless you denounce racism with sufficient vigor, you are worse that George Wallace (the former Governor, not the comedian).   It is a sure way to turn away your supporters and give comfort to your enemies.

That is the problem with these trends.  It is akin to the "red scare" of the 1950's when everyone saw a Communist under every rock, and everyone was pressured to renounce each other as being a "fellow traveler" or whatever.   Eventually, the whole thing fell apart when they started going after their supporters and the US Army itself.  People had enough and realized the whole thing had gone too far.  Of course, many on the Left saw early on it went too far.

Same shit, different era.  The folks on the Right - those who are not neo-Nazis or Klansmen (and yes, you can be a Republican without being a racist, ask Clarence Thomas) saw early on that the BLM movement had some signs of excess.  And today, this movement is turning against its own supporters, by decrying those who are not vehemently anti-Police or refuse to "defund the Police" (whatever that means).   Unless you publish a mea culpa on the web page of your vegan organic lesbian co-op, decrying your very whiteness and apologizing for existing on planet earth and consuming oxygen that rightfully belongs to minorities, you are part of the problem.

You laugh - I am not exaggerating.  A bookseller in Colorado was shunned not because she sold racist books or posted racist memes on her Twitter account.  Far from it.  Her thought crime was that she did not post such a manuscript online that sufficiently showed her support for BLM causes.   She thought - foolishly - that as a bookseller, it wasn't really part of her business model and she didn't think that her personal beliefs, which supported BLM, needed to be published.  What an idiot!

Meanwhile, my hippie brother's politically-correct puppet theater posts an online diatribe basically apologizing for the fact that hippies (like 70% of America) are mostly white.  Well, duh!

People, I think, are tired of this.  And like with McCarthyism, there will be a turning point where people say, "enough is enough!  You are attacking your own supporters and accomplishing nothing as a result!"

And I think that tipping point may be coming fairly soon.   Well, perhaps by November 2022.

And all the political donations I am being exhorted to make, won't make a rat's ass of difference.

Democrats are very good at screwing up a wet dream.  Fortunately, Republicans are equally as adept.

UPDATE:  Sadly, the entire "BLM" movement is crumbling under its own weight.  The leaders of the movement(s), awash in a sea of donations, decided to enjoy themselves a bit by purchasing mansions for the "movement" and putting their friends and relatives on the payroll - at pretty substantial salaries.

Organizations take on a life of their own, and BLM was no exception.