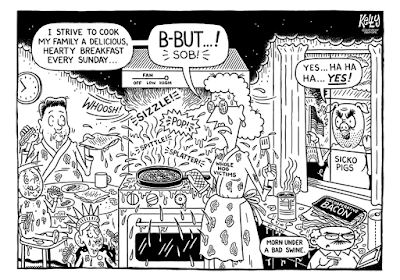 Our generation was taught to make everything on top of the stove.  But the oven is not only better, it is easier.

I noted in an earlier posting that Cook's Country has some great cooking tips (and some crappy subscription services).  That is one reason I cannot fathom this whole "I don't know how to cook!" movement, at a time when cookbooks, cooking shows, cooking channels, cooking YouTube videos, and cooking magazines are so prevalent and popular.  But then again, maybe that is the problem - everyone wants to watch or read about cooking, but not actually do it.  These are the so-called "Foodies" - people who love to eat, provided someone else does the cooking, preferably a chef at a restaurant.

Bacon has also become wildly popular in recent years.  Yes, when I was a kid, frying up a slab of Oscar-Meyer bacon was a messy chore that left your kitchen a haz-mat cleanup area.   Today we have all sorts of gourmand bacons to choose from - thick, thin, peppered, spiced, smoked and dipped in maple syrup.  What's more, you can buy bacon pre-cooked and even pre-crumbled in packages that may not even require refrigeration, until opened.  We live in bacon utopia.

Back in the 1970's, we had something called Bac-o-bits, which were a chemical concoction that tasted like industrial waste and had a texture that was not of this planet.  They were laced with salt and I am sure some monosodium glutamate.   That was "out there" bacon back in the 1970's when better living through chemistry was going to save our modern lives.

Anyway, getting back to baking.  Cook's Country did an article about bacon, and they suggested that instead of frying it on the stovetop, to put it on a cooking sheet (the kind with edges on it) lined with parchment paper and then bake it.  Parchment paper sounds like a recipe for an oven fire, until you realize it won't burn until Fahrenheit 451, so if you keep the temperature below that, not a problem.

Turns out, there are a lot of things you can bake in the oven rather than fry on the stovetop.  Mark likes to slice aubergine very thin and place them on a cooking sheet (again with parchment paper) and some olive oil and seasonings, and let them crisp in the oven until they are like potato chips.  Speaking of potato chips, this works for potatoes, too.

The other morning, we indulged ourselves in one of my unhealthy treats - corned beef hash.  I remember vividly when I was four years old, in Rochester, New York, my Dad proposing that we have corned beef hash for dinner, as Mother was tired of cooking and Dad was going to take command of the kitchen, open a can of what looked like dog-food and fry it on the stove.  The appearance and taste wasn't what set me off, though.  The term "corned beef" in my four-year-old mind was somehow wrong.  They were putting corn in the beef?  Somehow "corning" it?  That's just not right!  so I threw a four-year-old full-bore fit, at which point, I think the entire family realized that three kids would have been plenty enough.

Anyway, I tried it, and in a Green-eggs-and-ham moment, liked it.  It is, of course, not health food, particularly with a fried egg on it.  But it is also a mess to make on the stove, splattering and spitting all over the place.  And the texture can be a little mushy unless you cook it forever, at which point it instantly burns to a crisp.

I digress, but "hash" in general was made in the old days by grinding up leftovers and maybe throwing a few ingredients with it, and frying it in a "spider" (or in Maine, "Spy-Da!") which is a cast-iron skillet.  Red Flannel Hash, for example, adds beets to ordinary corned beef hash.  Others will take a corned-beef-and-cabbage dinner leftovers from the night before and just grind it up and heat it.  Sausage hash is another unhealthy treat.  We were driving through rural Georgia and saw signs for "Fred's Famous Sausage Hash" and I kick myself for not stopping and buying some.  I am sure it was good.

Anyway, getting back to baking, you put that in your Spy-Da and place that in the oven, and you end up with a crispy treat.  Only a billion heart-clogging calories, too!

Many folks don't like to use the oven - it takes too long to heat up and is a bitch to clean (dollar tree oven cleaner makes short work of it, although the fumes are pretty nasty).  The toaster oven is a good alternative, and many are huge today and even have rounded backs to accommodate the Spy-Da.  And while everyone is agog over the "air fryer" many toaster ovens already have this feature, which blew hot air over the food with a small fan.  Apparently, this is now a "thing" and people are rushing out to buy $199 "air fryers" when the $49 toaster oven does basically the same thing.

Oh, but an "air fryer" is oh-so-trendy, and a "toaster oven" is what your grandma uses to set the rest home on fire.  But I digress.  Yet again.