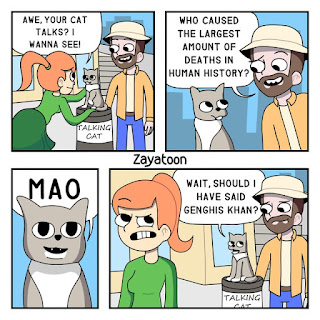 This funny little comic drove home a point I hadn't considered before.

I like to read the funnies everyday, and this one gave me a chuckle.  But then I realized that he was making a point - that Mao murdered more people than Hitler and Stalin and Pol Pot combined, and yet today, no one really seems to care, and this important event isn't taught in school.  Why is this?

Well, for starters, China was sealed off from the West for decades, so what went on in China was not reported much.  Second, well, they were Chinese, and anti-Asian prejudice was and is still rampant.  Back in the day (the 1960's) we talked about the "Chinese Hoards" and America has been suspicious of the Chinese since nearly its founding.  The Chinese Exclusion Act was passed in part because Americans were worried that a wave of Chinese immigration would simply overwhelm America, particularly its recently acquired Western provinces.

The sheer number of Chinese is also used as an excuse to ignore their plight.  It is akin to how the poor and minorities are treated in any country.  "There's so many of them!" people say, "They breed like rats!"  Or worse yet, "They don't feel pain like we do!"   When you can characterize a group of people as less than human than it is easier to slaughter them, or at the very least, ignore their being slaughtered.

An article in the Washington Post makes these points and a few more.  And one of them, sad to say, makes a lot of sense to me - that many in academia on the left (which is to say, academia) are apologists for Socialism and Communism and don't want to see leftist causes indicted by the excesses of those philosophies.   And yet, in nearly every Communist country, such atrocities abound.  When the state is all-powerful and owns everything (even you) then it will eventually go out of control.  Absolute power corrupts, absolutely:

But an even bigger factor in our relative neglect of the Great Leap Forward is that it is part of the general tendency to downplay crimes committed by communist regimes, as opposed to right-wing authoritarians. Unlike in the days of Mao, today very few western intellectuals actually sympathize with communism. But many are reluctant to fully accept what a great evil it was, fearful – perhaps – that other left-wing causes might be tainted by association.
. . .
In addition, our continuing historical blind spot about the crimes of Mao and other communist rulers, leads us to underestimate the horrors of such policies, and makes it more likely that they might be revived in the future. The horrendous history of China, the USSR, and their imitators, should have permanently discredited socialism as completely as fascism was discredited by the Nazis. But it has not – so far – fully done so.
Just recently, the socialist government of Venezuela imposed forced labor on much of its population. Yet most of the media coverage of this injustice fails to note the connection to socialism, or that the policy has parallels in the history of the Soviet Union, China, Cuba, and other similar regimes. One analysis even claims that the real problem is not so much “socialism qua socialism,” but rather Venezuela’s “particular brand of socialism, which fuses bad economic ideas with a distinctive brand of strongman bullying,” and is prone to authoritarianism and “mismanagement.” The author simply ignores the fact that “strongman bullying” and “mismanagement” are typical of socialist states around the world. The Scandinavian nations – sometimes cited as examples of successful socialism- are not actually socialist at all, because they do not feature government ownership of the means of production, and in many ways have freer markets than most other western nations.

Other Western brands like Nike Inc. and Adidas AG have also drawn consumer ire for their pledges not to use Xinjiang cotton, but H&M appears to have suffered the brunt of the fallout after the statement was called out by the Communist Youth League and the People’s Liberation Army. Its outlets have also vanished on Apple Maps and Baidu Maps searches, making it hard for Chinese consumers to locate stores, and it’s been removed from Chinese e-commerce platforms.

Apple - and Google - as well as some airlines, have found themselves between a rock and a hard place, when it comes to China.  Even mentioning Taiwan as a "country" is sure to raise the ire of the Chinese Communist government.  According to the Chinese Communist government, Taiwan is a "Renegade Province" which is an interesting gambit.  How long before other nearby countries are deemed the same?  How long before China call us a "Renegade Province" that is rightfully theirs?  We threw Taiwan under the bus by recognizing China in the UN (and booting Taiwan out).  That decision will come back to haunt us.
The locations of H&M stores vanishing from Apple maps didn't happen without Apple consenting to this.  How can anyone claim to be progressive and liberal and own an Apple product?  It is an interesting thought.
If this trend continues, companies will eventually be forced to choose sides.  And this is not the first time this has happened to Corporate America.  IBM, Ford, and others, all did business with the Third Reich, until the outbreak of war forced them to stop - sort of.   IBM machines continued to operate during the war, tabulating each Jew murdered, on convenient punch cards.  After the war, IBM made sure Germany paid their lease fees for the use of those machines during the war era.  Hey, business is business, right?
Of course, maybe I am being alarmist.  Maybe the Chinese Communist party will back down and realize they will destroy the "Chinese [Capitalist] Economic Miracle" just as Mao destroyed the Chinese economy before them.  They will realize that negotiation is better than confrontation, and that being paranoid and reclusive has no real profit in it, if you'll pardon the pun.  No sense in turning into a giant North Korea, right?
Maybe, but I doubt it.  Kind of sad to see, too, as the ordinary Chinese people are decent and hardworking folks who deserve a lot better.
Newer Post Older Post Home