Whatever Happened to Mercury? 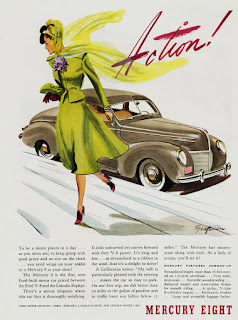 Mercury struggled with an identity crises from day one.

The Mercury brand, like so many before it, has been history for some time now.  Recently, I was reading some of the old Mercury brochures, as well as the history of the marque and several of the models, and realized it was a textbook case of poor brand management - or just poor management.  Over the years, different managers tried to take the brand in different directions, which just ended up confusing consumers.  The end result was probably preordained anyway, as the plethora of car brands in the USA was pretty ridiculous and a consolidation was long overdue.  But it wasn't as if Ford had as many brands as GM to deal with.  Surely three brands (as GM has today, in effect) wasn't too much to manage, was it?

Ford of course, started out as the maker of cheap, mass-produced cars.  In an era where a car was an investment for only the very wealthy, Ford had a "better idea" to "put America on wheels!"   It is hard to believe, but back in the early days, cars cost thousands of dollars (which today would be over a hundred thousand dollars) and only the very wealthy could afford them.  In fact, you bought a "chassis" and had coachwork made for it.  Some folks would have separate bodies made for winter and summer - and change the bodywork with the seasons.  Engines were huge affairs - six to eight liters, with long strokes and low compression to handle the crappy gasoline of the era.   Low horsepower, but loaded with torque, you didn't so much shift gears, as pick a gear and drive off in it.

Ford came up with a cheap and lightweight car that was more affordable - costing hundreds instead of thousands, and over time, costing less and less with each passing year, much as computers did in the early days of the PC.  But eventually, people wanted something more - something fancier, more stylish, perhaps riding nicer. The Model T was cheap, to be sure, but people wanted more.  And General Motors offered a range of cars for "every purse and purpose" - from lowly Chevrolet, up through Pontiac (Oakland), Oldsmobile, Buick, and Cadillac.  Ford had only... Ford. Granted, the Model A - successor to the model T - was much nicer and more stylish that its predecessor.  But that left only a single model to sell still.

While Ford had acquired luxury marque Lincoln, that left a huge gap in product and pricing.  You either had the cheapest car in America, or one of the most expensive.  So, in 1939, Ford brings out the Mercury, a slightly larger car based on the Ford, with more "luxury" and status, but not cannibalizing sales from Lincoln or Ford - or so they hoped.  Unfortunately, Mercury had only a couple of years to develop a following before the war intervened.

After war, Mercury never really took off.  The car was perceived either as a gussied-up Ford, or a stripped-down Lincoln, and in terms of actual content, the perceptions were largely true.  It didn't help matters any that Ford decided to bring out the ill-fated Edsel brand, which initially had two lines of cars, one based on the "smaller" Ford chassis, and the other on the "larger" Mercury.  During its brief tenure, Edsel was positioned as both a cheaper alternative to Mercury and also as a step-up from that brand.

The Edsel fiasco served only to confuse buyers as to what a Mercury was all about.  A wanna-be Lincoln, or something to move up to, from a Ford?   The gargoyle styling certainly didn't help any, and the marketing lurched from one idea to the next.  "The Big M of Mercury!" for example, barely lasted two years, before they took the giant letters off the front of the cars.

When McNamara was in charge, he wanted to ditch the Mercury, Edsel, and Lincoln (MEL) brands and strip down the company to just Ford - which probably was a better idea.  For some inexplicable reason, the Thunderbird - one of the early "personal luxury cars" (besides the Lincoln Mark II) was sold under the Ford nameplate - and it would be years before Mercury had a corresponding model.  Meanwhile, Mercury is given a fancied-up version of the Falcon (Comet) and Fairlane (Meteor) the latter of which never sold very well.

Once again, the marketing message was muddled. Mercury started advertising their cars were as cheap as "the low-price three!" which served only to cannibalize sales from Ford dealers.  Meanwhile, in Canada, where dealers were fewer and far between, the Mercury brand was little more than re-badged Fords - offered at Ford-like prices.  They even sold Mercury pickup trucks.

As the 1960's progressed, the personal luxury car took off - and Ford was there with the T-bird.  The muscle car and pony car eras took off, and Ford was there with the Torino Cobra and the Mustang.  Mercury ended up getting the Cougar - eventually - which should have sold well as a personal-sized luxury car or luxury-performance car.  But for some reason, all the advertisements for the car were aimed at women, which no doubt gave the car a reputation as a "chick car" - which is deadly to sales.

My Dad had a series of "Grand Marquis" Mercuries as company cars during the 1970's.  They were leased by the company and I think he got a new one every two to three years.  They were slightly bigger than the Ford LTD but not as big as the Lincoln Continental.  Sort of the front-end of the Lincoln mated to the back-end of an LTD.  Oddly enough, the biggest year for sales for Mercury was in 1978, when the bloated Cougar (now stablemate to the similarly bloated Thunderbird) took off.  My Dad always dreamed of having a Continental, but Marquis was as far as his company would go.  It sort of cemented the reputation of Mercury - in my mind, at least - as a wanna-be Lincoln that was really more of a glorified Ford.

As the years went by, things didn't get much better for Mercury.   The cars became more "badge-engineered" and there was little difference between a Mercury and its Ford counterpart.  The Mercury Marquis was a clone of the Ford Crown Vic, with only grills and taillights to distinguish the two.  Sad, too, as Ford made a long-wheelbase version of the Crown Vic (for taxicab use, only) and in Mercury trim, might have given Mercury dealers a selling point over the Ford.

The recession of 2008 was the death-knell for Mercury, but the writing was on the wall for some time.  Certifying a car for crash and emissions standards became an expensive nightmare for car companies.  Maybe back in the 1960's you could sell limited-production models, as you didn't need to spend the millions of dollars needed to certify a car for production.  It made less and less sense to "badge engineer" a car, as it was just as costly to design a whole new car as it was to tweak the taillights to make a different model.  Not only that, the public started to see through this chicanery, realizing that an optioned-up Chevy was just as good as a mid-level Oldsmobile, for a lot less money.

Could Mercury have been saved?  Easy to speculate, in retrospect.  Perhaps if the T-bird was introduced as a Mercury product (giving buyers a reason to visit the showroom, and positioning the car as a near-luxury brand) might have helped.  Offering something different and unique from Ford and Lincoln may have helped.  But Fords kept moving upmarket, with the LTD encroaching into Mercury territory, right down to the hide-away headlights.

Ford was not alone in this problem.  In his book, On a Clear Day You Can See General Motors, John Delorean recalled how he pissed-off the executives at Cadillac by introducing new Chevrolets in 1971 that had Cadillac-like design features, right down to the bulging center grill.  I remember friends of my parents buying a loaded "Caprice" with power windows, door locks, and the exotic "air conditioning" and commenting, "It's almost as nice as a Cadillac, but for a lot less money!"  The folks at Cadillac were not amused.  Now granted, the Chevy was on a shorter wheelbase platform, but most folks didn't care about such things.  Which is better, having all the options and paying less, or buying a stripped Cadillac "Calais" and having status and crank windows?

That was the problem for Mercury as well.  The folks at Ford division upped the content on their cars and made them look like Mercuries or worse yet, Lincolns, cannibalizing sales from the mid-level and upscale marques.  As I noted in an early posting, however, perhaps the idea of the "luxury car" was becoming obsolete by that time, as each brand offered different levels of luxury or options on their basic cars.

At one time, if you bought a Ford, you bought the "Ford Car" - there were no models to be had.  But over time, they offered "DeLuxe" trims, and then different model numbers and then names.  And as each year went by, the top-of-the-line model worked its way down the range.  The top-of-the-line BelAire in 1957 was, by 1967, next to the bottom, with only the stripped-down "Biscayne" being lower.  Impala suffered a similar fate, when the "luxury" Caprice was introduced.  Car companies do this to themselves, it seems.   Funny thing, the Japanese and Germans don't see to do it as much, though.  A Camry is still a Camry - after decades of production.

Our Japanese friends did create "Luxury" divisions (Infiniti, Lexus, Acura) for the US Market, but tellingly, sell these products (if at all) in their home country under the basic corporate brand.  It seems Americans are unique in their desire for status grills and logos.  So why did this work for the Japanese and not for Ford?

To be sure, some of the "upscale" products offered by the Japanese are offered under their lessor brands as well.  A Toyota Avalon can also be had as a Lexus.  But not all Lexus models can be had as Toyotas.  And they've done a much better job of making the products look unique. No one is going to pay thousands extra for a car with differently-shaped headlights than its lowly cousin.

But all of that is probably moot. The ultimate culprit was the demise of the US auto industry - the decline in quality, the increase in prices, and the resulting decline in sales.  Not only have Ford, GM, and Chrysler shed division names, they basically have given up on selling cars - for the most part - and have become SUV and Pickup Truck companies.

So maybe the end game for Mercury was inevitable.  Perhaps McNamara should have killed the baby in the crib and be done with it, and just as Edsel products (Comet) were folded into Mercury, the Mercury products could have been offered as premium Fords - or merely discontinued.

It is an interesting example of how corporations can mismanage a brand and get away with it - for decades - before it all comes tumbling down.