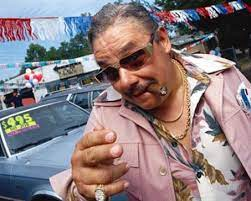 When people start asking personal questions when you are trying to negotiate a deal, watch out!

I recently replaced the shocks on the pickup truck.  It tended to bounce a lot over bumps, and someone suggested putting Bilstein shocks in the back, which I did, but it didn't seem to help much.   I put Bilsteins in my old truck (1995 F150) and they worked great.  I hesitated replacing the fronts ones, as they coil-overs and require you disassemble a good portion of the front suspension (tie rod, sway bar, upper ball joint, loosen upper bushings, remove strut) and is a bit of a PITA.

But the bouncing continued.  So I went to order Bilsteins for the front and.... Covid!  No delivery until June at the earliest.  But RockAuto had AL-KO extreme heavy duty shocks on closeout for $35 apiece.  For the price of one Bilstein, I was able to get two AL-KOs.  I will sell the Bilsteins on eBay.

And it went well, too.  Initially I was going to have  a local tire store install the front shocks, and I drove there to get the work done.  The guy behind the counter was a "Good Ole Boy" and the shop came recommended by a friend.  He hemmed and hawed about the job and admitted that their hourly rate was over $100 an hour, and that it would take "at least an hour" to do the job.

But then he asked me about "where was I from?" and I replied we've live here for 15 years and 20 years in Virginia before that.  "But where you from originally?" he asked, and I demurred.  He wanted to know if I was a Yankee, and if so, he was honor-bound by his pledge to the Klan to scam me for as much as possible.

Then the questions about where I lived and what I did for a living - basically sizing up my wallet to see what he could zing me for.   Suddenly, the one-hour job turned into a four-hour plus job.  So I left.  I went home, watched a YouTube video about the procedure, dug out my suspension tools and spring compressors and got it done in about two hours.   Jacking up the truck was half the work. 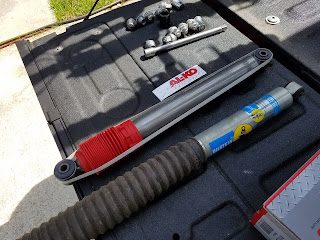 I knew what was going down as a few years earlier, the exact same thing happened to us.  More than a decade ago, we put a screen room on the back of the house.  It cost $5000 and since the recession was in full swing, the company that we hired was eager for the work.   Several years later, the recession is over and I am looking for someone to screen in Mark's studio and cover the pillars with aluminum or something.   I called the same guy.

He came over and didn't even bother to measure the job.  Instead he measured my wallet.  Same deal - where was I from, what did I do for a living, and so on.  He was pricing the job for the customer, not based on the cost of the job.   In a way, he is practicing basic economic theory - you charge what the market will bear, and each segment of the market (income level) will pay a certain amount.  So like General Motors, you sell a car for "every purse and purpose" and the old schoolmarm might buy a stripped Chevy Biscayne, while the town doctor drives a Buick, and the town Banker a Cadillac.  They cost about the same to make, but the more expensive cars have a much higher mark-up, just as big SUVs and pickup trucks are hugely profitable for the big-3 automakers, but they can't even pull a profit out of a small car.

Again, I demurred.  I mean the guy wasn't even measuring the job.  He quoted me some obscene price, like $8000 or something.   I told him that that was more than they charged us to build the screen room on the back of the house.  "We didn't build this for $5000!" he said.   But I had the receipt.   A whole room should cost more than merely screening-in an existing space.

We found a local guy, "Gene's Screens" and he screened it in for like $1500.  I wrapped the pillars with plastic soffitt material, which avoided the problem with pressure treated lumber interacting with aluminum (it causes it to corrode).

The funny thing was, this "Good Ole Boy" assumed we were helpless as kittens, until I pointed out to him that we built the damn studio ourselves for about $22,000 and weren't going to spend nearly half-again as much just to screen in the porch.

It isn't just a Southern thing.  Up North, we had a carpenter who just kept sending us bills and slowing down work on a front porch for the lake house.  The workers showed up at 10AM each day and left before 3PM - on the days they showed.  And yet, each week, he had a bill for 40 hours of labor and the exact same amount of materials.  When I pointed out to him that the workers were not here for 40 hours, he hemmed and hawed and said, "Well, they were back at the shop making things for this job!"

The project was 80% complete and I fired him.  "How are you going to finish it?" he asked.  I replied, "Plan B - do it myself" and he was a bit flabberghasted.  Again, he assumed we were helpless as kittens without his "expertise" but finishing the ceiling and trim wasn't really all that hard.  In retrospect, we should not have hired him.  Well, in retrospect, there are a lot of things you learn in life - often too late. Not being a patsy is one of them.

Salesmen like to play this game with people, though.  They talk you up and pump you for information, sometimes subtly, sometimes not.  They want to figure out if you have any money at all - otherwise you are wasting their time.  If you come across as poor, they might literally walk away from you.  But if you tip your hand as having two nickels to rub together, well then, the price just went up.   So they ask the innocuous questions about what you do for a living, where you live, are you married, how many kids, and so on and so forth.  And if I say I am a lawyer, well the price doubles almost instantly.

In some instances, it works the other way.  If you are willing to walk away from a deal, they might cut you a better one.   For example, in buying the truck, we negotiated via text and phone calls for nearly a week, until the price was somewhat reasonable.   On the other hand, the poorer clientele who want to slap temp tags on it and "drive it home tonight" will wait around for hours in the dealership, begging to have their credit approved (at 14% of course) and buy all the add-ons including the floor mats that came with the car.  Often poor and minorities are given the worse deals in terms of car sales.

But in other instances, a salesman might realize that the poorer customer might walk if a high price is quoted, as they simply don't have the money to buy.   It is an interesting psychological game, to be sure, and a good salesman is a good psychologist.

It pays to be astute when this happens.  And I notice this a lot more, now that I am older and have one foot in the grave.  There is small talk, of course, but when a salesman starts pestering me asking me what I do for a living, where I live, where I am from, and so on and so forth, I realize I am being scammed - he isn't interested in chit-chat, he is interested in seeing how much he can get away with charging for a job.

And with deals like that, all you can do is walk away.