Modern e-Commerce (In Defense of Amazon) 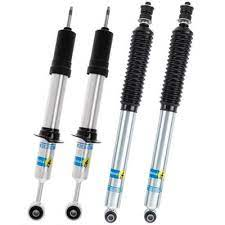 Many e-Commerce sites are little more than lead aggregators.

The suspension on the F150 is a little soft.  Ford has always been this way, I'm afraid.  Henry Ford loves his transverse leaf springs - with no shocks.  He thought independent front suspension was a Communist plot, and that hydraulic brakes were the work of Satan himself.  Thank God he's dead.   But a lot of his philosophy lives on at Ford - making things on a budget, and soft squishy suspensions.

Problem is, when towing a trailer, it rides like an inflatable bouncy castle.  So I replaced the rear shocks with Bilsteins and installed a Roadmaster Active Suspension, which at least leveled the ride a bit.  But still it bounces, and like all modern cars (the Hamster included) tends to wander a bit.

In the old days, cars were set with a fraction of a degree of "toe-in" - the front wheels were pigeon-toed, which made the car track better, as like dihedral on an airplane, it caused the car to want to center itself.  But that meant, of course, that the tires were scrubbing every so slightly, and this reduces gas mileage.  So the "spec" for modern cars is almost zero toe-in and they tend to wander.  The Nissan was this way until I loosened the tie rod ends and screwed them in one turn (and re-tightened them!) and it drove a lot better after that.  I will have to try that with the Ford.

Anyway, it still bounces a bit, so I decided to change the front shocks with Bilsteins, and I ordered them from the same place (who will remain unnamed).  They e-mailed me and said that due to CoVid, the shocks were on backorder until late June, at which point, we will be on our trip.  So I asked them to cancel the order and ordered them from Amazon, instead.

I digress here, but CoVid has been a Godsend for the slackers and poor managers of the world.   Can't fulfill that order, no sir!  Covid, you know - makes it hard to get parts and stuff.    Maybe this is true, or maybe it is just an excuse people use when they screw up.  Or maybe it is just a way to jack prices, by creating scarcity.   Tell people things are in short supply - like toilet paper and bottled water - and prices go through the roof.  And no one complains about high prices, they just feel fortunate to be able to buy at all.  Neat trick, Corporate America!

Anyway, they cancelled the order (they said) but my credit card was charged.  They said they would refund my card in 7-10 business days, and I have no reason to doubt they will.  But it struck me as odd, as although Amazon might put a hold on my card when I order something, they don't usually charge it until the item ships.   What is going on here?

Well, as you might guess the auto parts place I initially ordered from doesn't stock these parts, but rather is a lead aggregator for Bilstein.   You order from them, and their website sends a message to Bilstein, who in turn ships the parts from one of their warehouses, directly to you.  And it is one reason why the price of these items is uniformly the same, no matter which site you go to.  I suspect this is true for a number of products, such as my Merrill sneakers.

If you think about it, it makes sense.  Why buy up an inventory of parts that may or may not sell, when you can have the distributor or manufacturer just ship the parts directly to your customers from their warehouse?  It cuts out a whole level of distribution, cost, and risk (risk of parts not selling and having to be returned, which is a PITA for the manufacturer as well).

So.... what does the online "retailer" really do?  In short, they are just salesmen - Willy Loman - pushing products from their sample case and taking orders - orders which are fulfilled by the home office.  They might take money and issue an invoice, and provide some customer service, but the actual "fulfillment" is another guy's job.  And in today's online world, being a "salesman" might mean shilling forums to recommend products, or putting on a YouTube video extolling the merits of the product.

Contrast this with three recent purchases from eBay, Amazon, and Walmart.  I ordered a hot tub chemical kit on eBay on Thursday afternoon and it arrived on Friday morning!   Clearly, they had the item "in stock" and the company in question had delivery warehouses all across America, including here in Georgia.   On Amazon, I ordered a plastic Rubbermaid step-stool for the hot tub and got it in a couple of days.  Again, in stock and from an Amazon warehouse.   I ordered some vitamins from Walmart and they arrived - like the pool chemicals - in less than 24 hours.   Pretty  neat trick.

Yes, I do take a piss on Amazon a lot here - there is a lot NOT to like about them, including their whole deceptive "shipping" nonsense.  NEVER use "one-click" to buy, unless you want to pay $12.95 for "default" shipping that arrives a day earlier, instead of the real free shipping.  And it goes without saying, that "Would you like fast, free shipping?" is just a come-on for Amazon Prime.   And Amazon Prime is for suckers.

Of course, these things that shipped overnight are common items that sell in quantity and easy to stock and keep in the warehouse.  So they don't merely take your order and forward it on to the real seller at least in these cases.  Yes, I ordered the shocks again, this time from Amazon, but Amazon doesn't stock them in their warehouse.  Rather, like Walmart and eBay, they lease out their "platform" to "sellers" who then fulfill the order.  We'll see if we ever get the shocks.  At least Amazon didn't charge my credit card - yet.

Problem is, for you and me, Joe Consumer, we might not have an inkling of what is going on until after we order the item in question.  I suspect my order for the shock absorbers won't be coming here by April 21, as Amazon optimistically projects, as the 3rd-party "seller" in this instance, is probably also just forwarding my order to the Bilstein warehouse and sold out is sold out.  Maybe I need to look at an alternative brand.  Just a thought.

Now, of course, to most of you, this is like, "Well duh, Bob!" as you can figure out what is and isn't sold by Amazon or Walmart and what is sold by 3rd parties on their site.  It is like how the media (that great source of truth) regularly reports that Walmart is "selling racist t-shirts!" on their site, when in fact, they are just hosting a 3rd party seller who is selling the offensive item (and the 3rd party seller is in China and doesn't realize the item is racist).

The nice thing about in-house sales, is that the seller has an inventory of the item - "17 in stock!" which may or may not be a real thing.  I see on many sites, they say, "only 3 left, order soon!" which may just be an attempt to instill a sense of urgency in the prospect, which any good salesman will do, to close the sale.

But it is frustrating, to order something online, only to find out later on that the seller never had the item in their hands, and won't, for months, which if you knew at the time of ordering, you never would have ordered.

Then again, I guess that is the point.  Why miss a good opportunity to sell something, just because you don't have the item in question to sell?

Maybe in the future, they will just sell us the idea of products, and that will be enough!

UPDATE:  Rock Auto had AL-KO "extreme" HD shocks in stock, closeout, for $35 apiece (almost 1/3 of the Bilsteins) delivered in three days.  Huge M-F shocks, too - much bigger than the Chinese-made Bilsteins.  Maybe my love affair with Bilsteins is over.  Sadly, AL-KO seems to have left the US market.  For this price, though, I will give them a shot!