/T͟Hā/
Learn to pronounce
pronoun
used to refer to two or more people or things previously mentioned or easily identified.
"the two men could get life sentences if they are convicted"

The word "they" is a plural pronoun and should not be used to describe a singular person!

PBS recently released a documentary about Hemingway, which you can stream online for free from their website.   Just hook up a laptop to your television and enjoy.  It wasn't a very good documentary, in that it concentrated more on his family than his literature, which is not surprising, as his last surviving son, Patrick is the "literary executor" of the Hemingway estate, and controls access to all the materials.  So the focus was on the family and the fact he wrote a few books was wedged in there.

And he wasn't a very nice person - particularly to his wives.   A lot of people, myself included - as well as Gertrude Stein - thought he was gay.   But in this biography we are told that he was essentially gender-fluid, or at least experimented with gender identity with his last wife - calling her "Peter" and himself "Catherine" and dressing both androgynously. 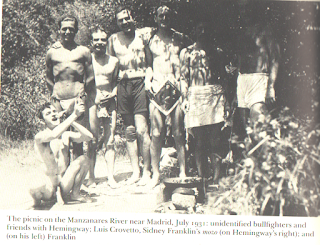 A younger Hemingway having a naked picnic in Spain with some of his bullfighter friends, because apparently that is what straight guys do.

His youngest son, Gregory, or Gigi, went as Gloria and went so far as to start a sex change gender reassignment surgery gender correction surgery gender affirmation surgery (as we call it today) before he died.  And Hemingway, the Senior, seemed to indicate that this "wickedness" in his son was an echo of his own "wickedness".  How sad.  Buy the kid a dress.

The smallest boy was fair and was built like a pocket battle-ship. He was a Copy of Thomas Hudson, physically, reduced in scale and widened and shortened. His skin freckled when it tanned and he had a humorous face and was born being very old. He was a devil too, and deviled both his older brothers, and he had a dark side to him that nobody except Thomas Hudson could ever understand. Neither of them thought about this except that they recognized it in each other and knew it was bad and the man respected it and understood the boy's having it. They were very close to each other although Thomas Hudson had never been as much with this boy as with the others. This youngest boy, Andrew, was a precocious excellent athlete and he had been marvelous with horses since he had first ridden. The other boys were very proud of him but they did not want any nonsense from him, either. He was a little unbelievable and anyone could well have doubted his feats except that many people had seen him ride and watched him jump and seen his cold, professional modesty. He was a boy born to be quite wicked who was being very good and he carried his wickedness around with him transmuted into a sort of teasing gaiety. But he was a bad boy and the others knew it and he knew it. He was just being good while his badness grew inside him.

— Islands in the Stream

But what was annoying to me was reading the Wikipedia entry above for Gregory, which used the pronoun "They" in the introductory paragraph.  It was confusing as fuck. "They" is a plural pronoun and when you use it to refer to a specific person it gets very confusing. Yes, technically there is an alternative definition used when you are talking about a person of unknown gender.  For example, "Call the desk clerk and ask them if they have extra towels"  In this instance, you don't know the gender of the person at the front desk.  In the case of Gregory, you could go with either him or her, but not "they".

UPDATE:  The Wikipedia page has been edited and edited again in the last few days and weeks, and there is quite a discussion amongst the editors on how to handle this.  As of this writing, Greg is referred to as "He" in most of the entry.  When I first read it, the opening paragraphs were all "They."  There is much heat and not a lot of light on the "Talk" page!

This idea that being called by the wrong pronoun is akin to being dipped in acid is just nonsense.  We take offense at so many things today, and trivial things you just have to let slide.

Grammar isn't just for funsies - it is how we communicate.  As I noted before, it is like checksum in data transmission.  You transmit seven bits of data and one parity bit that is the sum of the earlier bits.  If there is a disagreement on the receiving end, you know the message was garbled and can ask for a re-transmission.

Similarly, things like subject-verb disagreement and dangling modifiers tell the listener that the message is unclear - you can ask for clarification.

So when you read an article about a person and they keep saying "They" you keep wondering, "who are these other people?  I thought they were talking about one person!"

And it isn't just the pronoun, but the verbs.  For example, if you say "They are...." you have a plural pronoun and verb.  It isn't clear.  "They is..." is subject-verb disagreement.  And why the fuck are we doing this?  Because some snowflake claims they are of no specific gender?  Oh, for fuck's sake!

You know, in the "romance languages" such as French, they have genders for every noun.  You don't see the cats and dogs there protesting for being called "Le Chat" or "Le Chien" do you?

It just isn't that important, in the greater scheme of things, what pronoun someone calls you by.  And it isn't grounds for firing a school teacher.  One teacher is under attack for using the wrong pronoun, citing "religious views" - and we know he is religious as he nailed himself to the cross over this.  Another tried to duck the whole issue by referring to students (all of them) by last name only.  Sorry, no sale!  Not only do you have to teach the course material, you have to recognize each student's chosen gender and keep them straight (no pun intended).  If you get it wrong, even once, well too bad for you - career over!

Is this the hill we want to die on?  Is this worth losing the House or Senate or the Presidency?  Because let's face it, Fox News is having a field day with this shit - painting the Democrats as a bunch of loony-tunes who have nothing better to do than make bathrooms transgender and make everyone feel uncomfortable all the time.

I was just chatting with a neighbor lady who is a schoolteacher.  She has been teaching for decades now, and is doing virtual classes online.  She is a raging liberal (should I say "they?") but admits that today she has to "think very carefully about what I say in class" lest something be held to be not politically-correct and she gets reported to the authorities for re-education.  This "walking on eggs" thing is going to backfire in a big way, because no one liked to feel uncomfortable all the time or feel that anything they say off-the-cuff  is going to get them fired, destroy their career and maybe get them sued.

Who wants to live that way?  No one. And I say this having lived that way for nearly 18 years.  My alcoholic Mother used this same passive-aggressive technique to control people and it is a shitty thing to do.  She had a list (unwritten of course) of no-no words, which, if uttered, would send her off in a tirade.  Canada, for example, was one of them.  Dad had an affair with a woman from Canada, and if you had the audacity to mention the fact that America has no northern coastline but in fact borders another country, she would go "off" for hours, and probably end up attacking someone with a knife.

I vowed never to live that way, ever again.  I refuse to "walk on eggs" around someone because of their perceived "sensitivities" or "trigger words" or whatever.  It is crappy passive-aggressive shit, and the moment you cave into this, you are toast, period - because the list of no-no words will only grow over time, until you can say nothing.   This doesn't help - it hurts.

I mentioned before a friend of mine, after a few beers, talked about time he spent in Paris, where "all those Frenchmen wear those faggoty little hats!"  He realized what he said after looking at us, in horror. "I'm so sorry!" he said, and I laughed as loud as I could and told him not to sweat it.  You see, he felt he had to "walk on eggs" around us, and that inhibited the relationship.  You can't be friends with people you have to walk on eggs around.  You can be swell enemies, though.

And that is the point.  The more the far-Left plays these passive-aggressive word games, the more animosity it will stoke not only on the far-Right, but in the center - the very people the Left needs to get elected.  So long as the middle-of-the-road Conservative Democrats and Liberal Republicans feel they are being beaten down by the Word Police, the easier it will be for the far-Right to win.

He who controls the language of the debate controls the debate - and that is all that political correctness is, trying to control language.  It is Newspeak in real life.  And it will backfire in a big way.

It is also shitty grammar. If you want to create a new pronoun to describe a singular person of indeterminate gender, then do so. We created "Ms." to describe a female whose marital status is unknown or who prefers not to identify by marital status.  Can't we do the same here?  Be creative, for chrissakes - you're Lefists, after all, all artsy-fartsy to begin with!  Using "They" just smacks of laziness and a lack of respect for the English language.

It would seem to fit!