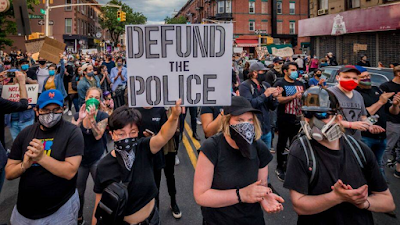 Chanting slogans might make you feel better, but it isn't really a substitute for nuanced public policy.  Another BLM protest with nary a B in sight.

A reader writes about my previous posting, in which I mentioned that the slogan "Defund the Police" really is a nonsense phrase.  What it means is an Rorschach ink-blot test - different people see different things in it.  To the naive Anarchist (I am being redundant here) it means get rid of the police, who are just "criminalizing the behavior of citizens" which I guess is true if you call murder, robbery, and rape "behaviors" and not just crimes.

Others have long-winded explanations about how police funds should be diverted to "Community Intervention" to defuse situations rather than escalate them.   So, for example, a crazy homeless person (again, I am being redundant) attacks someone, you should send in mental health professionals, rather than armed officers.  Problem is, of course, the homeless person may have a knife or be one of those fun fellows who likes to push women in front of speeding subway trains (it is a thing, google it).  Nice folks, those homeless!

I agree that mental health intervention is key - we need to institutionalize people who can't take care of themselves and are a threat to others, which pretty much describes 90% of the homeless population, which, by the way, makes up a fraction of a percent of the population of the United States.  But of  course, we all saw One Flew Over the Cuckoo's Nest and thought that all mental institutions were evil and all mental health professionals were Nurse Ratched.

Funny thing, though, you watch a lot of these "abandoned urban explorer" videos on YouTube and realize a lot of the abandoned buildings that these youngsters foolishly explore (and deface) are old mental hospitals, which indeed look creepy because they were abandoned about 50 years ago or more.  But what you realize is that we used to have a lot of mental institutions, going back a century or more, because crazy has always been with us, and people have realized - since time began - that crazy folks can be dangerous and often need to be isolated from society for their own good, and the good of society.

But that is just crazy talk, if you'll pardon the pun.   Give them meds and tell them to live under a bridge and shit on the sidewalk and scream at passers-by and beg for money or steal shit, until they get arrested for assaulting or killing someone, in which case, then we can find an institution to house them - a jail cell.  Progress, eh?

And the homeowner who has to live across the street from the homeless camp and see his car broken into every night?  Fuck him, capitalist pig!  Going to "work" and having a "job" and "earning money" - who does he think he is?  Trading a really authentic "life on the streets" for some plastic lifestyle with a roof over your head, three meals a day, and taking care of yourself and your family.  What an asshole - selfish, is what he is!   When the revolution comes, they'll line him up against the wall!

Another example of sloganeering replacing careful thought is this crazy idea about student loan forgiveness, free college, and free money, or "guaranteed income".  All three ideas break down to the same thing - the government should give away money, not just to people in need, but to everyone, regardless of need.   Give money to colleges to make them "free" and of course, colleges will carefully spend this money and cut costs to give the government value for its dollar.  Military contractors have shown us this is indeed possible.  The sarcasm light is brightly lit, in case you didn't get the jape.

Forgive student loan debt.  But for who? Everyone?  Or for people who pass a needs test?  What about people who just made their last payment last year - or ten years ago?  They feel foolish for scrimping and saving to pay off their debts.  And is an average debt of $35,000 really that onerous?  And what about the guy graduating next year?  Five years from now?  A decade?  Does he get forgiveness going forward?  If so, he should borrow as much as he can as it is free money.  And with graduate degrees, they will loan you all you can stand - which you can put in your pocket.  And I am sure banks will be all-too-willing to lend an infinite amount once they realize the government will pay it back, to the penny, upon graduation.

This really hasn't been well thought out, has it?  The various proposals so far are vague.  Ms. AOC wants a blanket $50,000 per person wiped out, regardless of need.  Biden is willing to go to $10,000 but not by Presidential decree, but through Congress, which I presume would insist on conditions.  By the way, a Republican friend of mine who watches too much Fox News (which is to say, watching any of it) told me in all earnestness that Biden has already forgiven student loan debt.  Tucker Carlson is an entertainment figure, not a news source!  (Biden did sign an order making any loan forgiveness tax-free, but has not signed an order mandating loan forgiveness - a big distinction).

The problem with all of these "free money" proposals is that you have to ask where does the money come from?   Some on the far Left argue that if we tax the 1% it would pay for it all.  Some even propose a "wealth tax" on money you own, not earn, which would run smack-dab up against the Constitution, not to mention Congress.

But even assuming the wildly impossible scenario that we could take away all the wealth from the wealthiest 1% in the country, it would amount to about $100,000 per person for everyone in America.  That might sound like a lot of money, but it really only represents two years' income for most people in America, perhaps less.  And once it is spent, well, it ain't coming back.  But of course, we can't take away all the wealth from the top 1% in the country - but we could tax the crap out of the top 10% or top 20% or so.

The top 1% of course, would use perfectly legal means to avoid such a tax - as I noted before. When you increase tax rates far enough, people spend more time avoiding taxes than they do creating wealth. And we know this because that far-right Republican fascist John F. Kennedy showed us how it worked, with dramatic tax cuts enacted during his Presidency - which helped put an end to the recession of 1958-1961.  Tax policy is not a Republican-versus-Democrat thing, but a matter of mathematics.

This is not to say that recent tax cuts couldn't be abolished - without ruining the economy - but massive tax increases can and will backfire.  And taking away wealth from people just isn't legally possible. The real problem with this "tax the rich" nonsense is that who you think of as "rich" often turns out to be the guy you see in the mirror.  It's all fun and games until they come after you.  And you'd be surprised at how "wealthy" you might actually be.

For example, if you say, "Tax the top 10%!  Make them pay 50% in taxes!" you might be surprised to realize that means someone making $118,000 a year, or about twice the median household income in America.   You have to be careful of what you wish for.   And between Federal, State, Local, and Sales Taxes, you may already be paying 50% of your income in tax.   Do you want to pay more?  So some bum gets free drug money, or so some irresponsible 18-year-old can major in Agitation Studies?

Since there really isn't enough money that could be raised in taxes to pay for these pie-in-the-sky ideas, we would have to resort to Plan B - which we already are - which is to merely print more money.  Printing more money acts as a tax on everyone and also a wealth tax and it has been shown, time and time again, to wreck any economy.  It particularly impacts the poor.  Today, Venezuela, not long ago, Argentina - before that, Wiemar Germany.  Rampant inflation destroys an economy and impoverishes people.

We've never had hyper-inflation in America, but this may be about to change.  When I was coming-of-age, inflation was running over 10% and Americans were learning to live with lowered expectations.  Companies were struggling, gasoline was rationed, and suddenly a tiny car "made sense" as no one could afford the gas-guzzlers of a decade earlier in terms of price or cost of ownership.  It was a bleak time and people voted for Ronald Reagan because they were sick of it.

I digress, but I predicted the Democrats would screw up a wet dream when they won the House, Senate, and Presidency.  Wild-assed proposals like the slogans talked about here, are not going anywhere, but are alarming a lot of people.  "It's the economy, stupid!" Bill Clinton said.  And if inflation tracks upward, it will be the issue the GOP wins on in 2022, provided they can keep Trump under wraps. Republicans seem to have a good track record of screwing up a wet dream, too - that is the Democrat's only hope.  The GOP can only hope that Trump finally has his massive coronary, or that he is finally indicted.  Stay tuned.

If inflation goes back up to 10% or more - which it would likely do, if we continue to print money and then give it away - then the $1200 Andrew Yang check doesn't go as far as it used to.  So after a year, you have to increase it 10% to a $1320 check and then the year after that, a $1452 check, and so on.  Actually, since each increase in "free money" accelerates the printing of money, the increase in free-money checks would have to be exponential just to keep up.

For workers, it means constant pay raises - and strikes to get them - as we saw in the 1970's.  The cost of labor goes up, and the cost of products goes up - fueling inflation further.  Ditto for Social Security recipients - their cost-of-living increases would skyrocket.  At best, you can only hope to keep up with inflation - at worst, you are wiped out.

For people living on their 401(k) or IRA money, finding ultra-high rates of return would be the name of the game.  Otherwise, your retirement funds would be worth less and less every day, until your "life's savings" isn't enough to buy a cup of coffee.

Getting off the inflation merry-go-round isn't easy - it involves pain for everyone involved.  Government spending has to be cut to the bone, and borrowing reduced and money-printing stopped.   Eventually, it is possible to recover the economy, but not without a lot of pain and social disruption.

Slogans are comforting, but hardly well-thought-out plans.  Maybe it is time we stopped sloganeering.