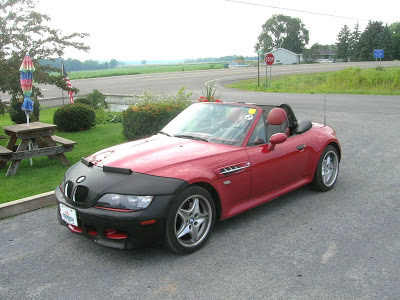 Things come and go as fads. What was once "must have" is later seen as passé
I mentioned in a previous posting that I had a car bra on my car.  Actually, I owned a few of these.  The first one, I think we had on Mark's 1987 VW GTI, which was an odd car.  It had the eight-valve engine, manual transmission and manual steering, and low-profile Pierelli tires, which never lasted more than 30,000 miles.  Considering that Michelins (or even Goodrich) tires last over 50,000 miles, that is not very good tire life.  But if you want "performance" you have to pay.  Most people don't want "performance" - they want a way to get to work.

Anyway, Mark had a small fender-bender in the parking lot and creased the front corner of the car by the headlight - and broke the headlight mount.  I found a used headlight in a junkyard and pounded out the dent and fiberglassed it.  We were broke at the time, so that was the best we could do.  I put a "nose bra" on the car, which covered up the fiberglassed area and also the rock chips that form on the leading edge of a car, particularly if you are prone to tailgating or live in snow country.
There were two schools of thought on car bras.  The first was that they would protect the nose of the car from rock chips and bugs and what not.   The second was that they were a useless accessory that would actually wear a pattern in the paint over time.  And over time, I found the second philosophy was pretty true.  You can get your car repainted after five years to repair the rock chips and whatnot, or you can get it repainted after five years to erase the rub marks from the nose bra.  The second option is more expensive, as you also spend $99 to $199 on the nose bra.
Or.... you can just tailgate less and learn to live with the fact that cars are not forever, and after a decade, the front of your car is going to have some chips and bug marks on it and whatnot - and just live with this until you eventually trade in the heap.   It's just a thing, trying to keep it perfect is kind of dumb.  And yes, I am kind of dumb.   Funny thing, too, I used to wax my cars like once a week, but today it is more of a once a year kind of thing.   Sure I want to keep the car clean - or clean-ish, particularly inside - but I don't obsess about it so much anymore.  After you've sent 30 cars to the junkyard, you become less attached to them.  And no, I have no interest in having a collection of 4,000-lb paperweights.  Yes, it was cool to have a garage full of BMWs, but it was a fleeting pleasure - and maybe a false one.  But I digress.
What is interesting to me was how these automotive accessories went from hot to not in about ten years.  And as I noted in a very early posting, a lot of these accessories are kind of worthless, including the auto bra.  Strut-tower braces were very popular at one time - and might still be with the rice-racer set, but getting hard data on how they improve handling is elusive.  Cold Air Intakes ("CAI") and cone filters look cool, but even the manufacturer's own data shows them to add little horsepower, and most of that at redline (that is, before the manufacturer took the data down from their site!).   Tellingly, most of this stuff is chromed and glitzed and glamored up, so a 20-something boy can pop the hood on his Honda and have all his friends Ooooh! and Ahhh! over it.   It is just wallet-lightener is all.
I was thinking also about ceiling fans, which became popular in the 1970's during the energy crises, and were sold (up North) as an accessory to your new wood stove, to circulate the heat around the house.  They are useful, too.  We had four in our house when we bought it. We added one in the breakfast nook, and replaced two of them - which then became part of Mark's studio.  We also have two, on the front porch and back porch (outdoor models - never use an inside ceiling fan outside!) for a staggering total of nine ceiling fans.   Do you think that is enough?
It got me to thinking, though, whether they were also a fad, and whether they are falling from favor.  Turns out, they are increasing in sales, not dramatically, but linearly, over time.  But then again, the number of homes is increasing over time as well.   But I wonder if the trend will ever reverse - if some designer will say, "Ugh!  Ceiling fans!  A travesty!" and just as suddenly as everyone "had to have one" they dump them all at the curb.  And indeed, some of the fans they sell are, well, kind of tacky, particularly those with Olde Tyme light fixtures.  Apparently some designers already despise them.
Of course, they are more functional than a car bra - or are they?  Just a thought - air circulates in your house anyway, and many modern HVAC systems, such as our new one, have a "circulate" feature that turns the fan on for 15 minutes every couple of hours or so - combined with a HEPA filter in the air handler, it picks up a lot of dust in your house.  Ceiling fans, on the other hand, seem to just circulate the dust - and also accumulate it.  They require cleaning at least twice annually, if not more often, as the leading edges of the fan and the motor housing encrust with grey dust.
Maybe in a few years, people will look at a house and say, "Ceiling fans!  Remember those?  I can't believe these folks still have them!" and the ceiling fan will look as outdated and dorky as the ceiling light fixture it replaced.  Maybe.   It is funny how we lived without them for so long!
Newer Post Older Post Home