No, not Harry Lime, but lime deposits....

Water is called "the universal solvent" and for good reason - just about everything dissolves in it.  In fact, the water you drink, whether from the tap or a bottle, often has minerals added to it, as pure distilled water is pretty tasteless and suitable only for your car battery and steam iron.

We have "hard water" here on the island, but it isn't really much harder than water in other places in the country.  In fact, hard water is pretty much the norm.  You may recall the fiasco in Flint, Michigan (well, the latest fiasco - Flint has a recent history of them) where they decided to switch water supplies.  The new water had less minerals in it, and it dissolved the coating on the old lead pipes that had built up for decade after decade, and as a result, the lead was exposed and dissolved in the water, poisoning the population.  Water is a tricky thing.

I grew up with really hard water.  We lived by the lake, but had a well, and the water was full of iron.  It turned the toilets brown in about a month and we had a potassium permanganate water "softener" system that was a royal pain-in-the-ass to maintain, as it required "backwashing" frequently and adding more of this purple potassium permanganate crystals into it - often turning the water purple for a while.  It never worked quite right - the water always smelled like sulfur and left iron stains everywhere. 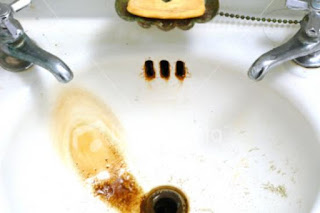 Some bad iron stains!
Back then, we were unaware of any products to remove lime and rust deposits from our toilets and sinks.  Sure, you could run vinegar (a mild acid) through your steam iron or coffee maker, and it would remove some lime and scale deposits.  But it wasn't until they came out with CLR - Calcium, Lime, Rust remover, that there was anything more powerful than vinegar for the average homeowner, although I suppose more resourceful people would get some acetic acid - often used to etch brick and whatnot - which is probably the active ingredient in these various commercial products.
Today, they sell "Lime-away" at the Dollar Tree (for guess how much?) and it works wonders.  Soak a sprinkler head or shower head in it, and the crusted lime falls away.  Spray some in the dishwasher and run it and the stainless steel actually looks stainless.  Rub it on the seals and the dishwasher no longer leaks.  Faucets that were developing a weird crusty formation look new again.  But it is acidic, so be careful, it will etch metals!
They make it in a spray and a "gel" - the latter of which is useful for removing lime and rust stains from toilets.  Be aware, though, that it may take many, many applications to remove encrusted lime deposits from a toilet.  It took 15 years to get them there, they ain't going away overnight.
It also removes rust from other things.  If you have something that you want to keep, that got rusty, a little lime-away may save the day.  Of course, when the rust washes off, it may leave a depression in the metal where the metal used to be.
Limeaway is a regular part of our cleaning supplies these days.  But again, you have to use it carefully.  It will clean away lime deposits from your sink - or dissolve the very metal you are trying to restore!