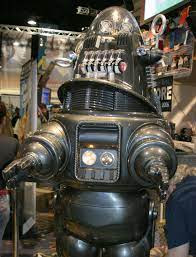 Are robots the ultimate sign of humanity's defeat?
Many people have held that robotics are a sign of the advances of our society.  However, it has occurred to me that the implementation of robotic devices is not a sign of humankind's advance, but rather an admission of its ultimate defeat.

We are traveling in our camper and driving on the highway.  And it's not hard to see why the Federal Highway Administration has been pushing for self-driving cars for several decades now.  People drive horribly.  And by this I don't just mean the people who are inattentive or make mistakes, as we all do on occasion, but the people who intentionally drive badly because they feel they need to get ahead.

If there is even a slight backup, such as when a truck passes a truck, people start racing around each other trying to get advantage.  It is human nature at its worst.  "Out of my way, I'm a motorist!" they seem to say, as if nobody else needs to get anywhere but them.

Self-driving cars, while being a technological advance, are an admission that we no longer have the ability to drive.  Even over-the-road truckers, professionals who were once the "Knights of the Road" swerve in and out of their lanes as they look at their phones and texting devices will driving 50,000 lb rigs.

We stopped at a rest area in South Carolina, and a plaque proudly proclaims the restrooms are "fully automated" - everything from the toilets, to the urinals, to the soap dispenser, to the faucets, to the hand dryers, and the paper towel dispensers are automated and only you need only wave your hand to be served with a flush or a wipe or a dollop of soap.

Again, this is an advance in technology that would amaze our ancestors of only a few decades ago.  But the reason for these automated devices has a dark side.  In the past, people would wad up rolls of paper towel and shove them in the toilets and sinks and leave the faucets on or flush the toilet repeatedly in order to flood the restroom in and act of petty vandalism.  And judging by the signs I'm seeing in various public restrooms - imploring people not to flush paper towels down the toilet - this activity still occurs regularly.

Automated soap dispensers and paper towel dispensers are not only convenient and sanitary, they also regulate and control the amount of product dispensed.  People are greedy and selfish, and gladly grab for more paper towels or soap than they really need, not thinking about the cost or the inconvenience to others when the dispensers run out.

The same is true with manufacturing and even retail.  People are concerned that minimum wage jobs in fast food restaurants may go away as kiosks replace order takers, and automated machines flip the burgers and make the french fries.  And indeed, part of this is to save money and in an era where minimum wage unskilled workers are demanding $15 an hour - another sign of our greed and selfishness. We all believe we are due a certain amount of income regardless of our lack of skills or incentive to work.   Where did you think the idea of "guaranteed minimum income" comes from?

But from the customer side of  the equation, we all quietly applaud these moves toward robotics.  The order-taking kiosk is more accurate and easier to use than talking to a person behind the counter who may be heavily accented or barely speak English.  Not only that, the kiosk is faster, as we don't have to wait behind some self-entitled fellow citizen who feels that since they're at the head of the line it's their turn to make everyone else wait.  Again, the baseness of human nature rears its ugly head.

And granted, fast food is bad and poorly made, but most of this is because the people making it don't do a very good job.  I've noted before how in may fast food restaurants, there's a passive-aggressive game with a french fry machine, as nobody likes to put down the fries or take them up because they get splattered with hot grease.  As a result, nobody actually makes the fries until there's a backlog of people in the parking lot, at which point they hastily make several orders of fries which are not cooked sufficiently enough.

An entire Subreddit exists of people posting pictures of what their fast food sandwich is supposed to look like from the pictures on the menu, versus the mashed up piece of crap they actually get in the box or package.  Automation would fix this problem, and the food would be prepared consistently and perfectly every time, something that humans no longer seem interested in doing, but were once capable of.

Of course, the excuse given by the people working at such places is, that since the pay is poor they should do a shitty job.  However pay in restaurants and diners has always been shitty throughout history and yet we have often been able to get very good food from such places in the past, but not today.  As a result, today, we tend to accept shoddy service and poor products.

Even when pay is high, humans no longer seem to be interested in doing good work.  Robotics have already taken over in many industries.  Automobile production today is largely automated, mostly by necessity.  In the past, cars were largely handmade, even if they were made on an assembly line.  If you look at old videos of automobile assembly plants, you'll notice there's dozens of people at each station and thousands of workers overall.  And back then, those were top-paying jobs in the community.

Like the fast-food workers today, auto workers by the 1970s decided that doing a shitty job is all they were paid for, and quality of American automobiles plummeted, mostly because of poor assembly.  Today, we have robots paint cars which come out consistently even and perfect.  Critical and essential elements are assembled by robotics and bolts are no longer missing from cars as they go down the line. Today, no one would accept the build quality of automobiles for the 1970s or should they be expected to.

Robotics represents a failure of American management, failure of the American worker, and the failure of our society as a whole.  The impetus for robotic technology is not necessarily the availability of it, reducing labor, or reducing costs, but the fact that human-based labor has such a poor track record, which is the fault of both labor and management.

Perhaps in the brave new world of robotics, our robot overlords will finally get us straightened out as human beings and put us back to work - this time, not allowing for mistakes and slacking-off.
Newer Post Older Post Home