Why Robin Hood Gave Up 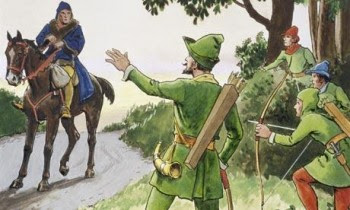 Stealing from the rich is a lot of work.  It's a lot easier to steal from the poor.

One thing that confounds a lot of people is why scammers and rip-off artists target the poor.  Certainly, it would be more lucrative to steal from the rich, right?   After all, in all those "caper" movies, the plucky heroes rob the vaults of the evil casino owner, or pull over a "sting" on a mob boss, right?

Well, wrong.   You see, as a business model (and that is all crime is, a business model) it really isn't that profitable and is also has high risk factors.   The very rich are tighter with their money and are more skeptical of con artists.  They also can afford to come after you if you steal from them.   So if you want to break into the vault at the casino, expect to have your legs broken at the very least, if you don't end up in a shallow grave in the desert.

But what about stealing from the poor?  Well, the old joke is that Robin Hood stole from the rich as the poor don't have any money.  But a lot of money does pass through the hands of the poor, and if you can take a dollar here or a dollar there, you can end up with tens of millions or even hundreds of millions of dollars.

And no one in their right mind is going to come after you for stealing a dollar from them, if they even notice the theft.  Even if you take $5000 or $10,000 as invention brokers do, the poor are not going to come after you, as they are largely powerless and the cost of legal fees would exceed the amount recovered.

Stealing from the poor is a much more lucrative and safer deal.

So how do you steal from the poor, you ask?   Well, there are an infinite number of ways to do this.   For large companies, it means adding a dollar or two here or there to a bill for worthless services.   For example, you lend money to a young man for an auto loan.  He pays through the nose in interest rates already.  But you sell him the idea of "loan insurance" so his car loan will be paid off if he is dead or incapacitated.   And many people sign on to this idea (mea culpa, I did at one time) not realizing that if they were dead, the car loan would be the least of their worries, and if they were incapacitated, they wouldn't need a car.

The poor tend to bite on things like this - selling "peace of mind" by selling them towing insurance or roadside assistance or extended warranties and whatnot.   Granted these are all not outright ripoffs (in that they take money and provide no benefits whatsoever) but that even the best of them take what are ordinary life expenses, amortize them, and then add a hefty profit margin.

For the individual crook who wants to gouge the poor, the options are a little more difficult.   The basic idea, of course, is to prey upon the greed of the mark.  People will hand over their money if you make promises to make them rich or give them something-for-nothing.   Tell them you are selling them a money-making scheme, for example, which could be an MLM type thing or maybe a "system" for buying and selling houses.  There is no end to these sort of things, of course, you just have to use your imagination.

For example, poor people want things, so you sell them the idea of things.  You put an ad in Craigslist advertising some gaudy trinket that the poor covet - like a jet ski or a motorcycle - for a fraction of its actual value.  You then make up a long-winded story about how you are settling your dead brother's estate and need to unload the item quickly- but only if the mark will wire you $500 by Western Union.  It helps to be overseas if you want to pull this off and not get caught, of course.

Each transaction might not yield a lot of money, but $500 here and $1000 there add up, particularly when you have 5,000 ads on Craigslist and other venues, and 50-100 suckers on the line at any given time.

So what's the point of all this?   Instructions on how to be a con artist and a crook?   No, not that.  Only an illustration of why the rich get richer and why the poor get poorer - and a hint of how you can avoid the latter.    Criminals prey upon the poor because they are gullible and easily swindled.   Stop being gullible and easily swindled and your life may change in amazing ways.

Robin Hood gave up and started stealing from the poor, because frankly, it was a far more lucrative gig.   The Sheriff of Nottingham stopped chasing after him, and the two became fast friends - particularly after Robin Hood contributed a large sum to the Sheriff's re-election campaign (the poor voted for him, as he promised to "Clean up Sherwood Forest!" and outlaw abortion).  The two of them now play 18 holes in the Sherwood Forest Golf Resort - paid for, of course, by the taxpayers of Nottingham.