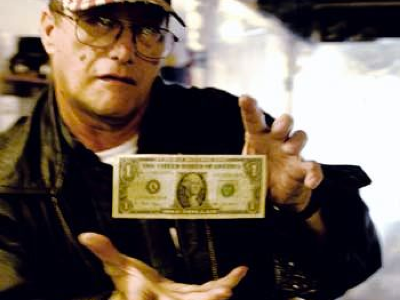 What do we mean by phantom profits or profits and losses "on paper"?

This is all very well and fine.  Apple has a rational P/E ratio today of about 17 and actually pays a dividend of about 1.8%.   I am not invested in Apple, directly.  Likely one or more mutual funds I am in has some Apple stock, and unfortunately, Facebook as well.  But I am not running out to buy it because the financial press collectively came in its pants today.

The financial press harps on share price and "market cap" as if it was the only game in town.   What they fail to realize is that making money is the name of the game, not watching numbers go up and down on a computer.   And you don't make money until you have a realization event, and until then, any profits or losses are purely conjecture.

For example, you buy a collectable Ferrari in the early 1990's before the dot-com boom.   You pay $100,000 for the car.   A bunch of zit-faced 20-somethings in a tech company strike it rich and decide that a Ferrari will finally get them laid (this is the only thing that drives tech - sex).   So they start buying up Ferraris and the market value of your car zooms up to $250,000.

You think you're a genius for buying this car and decide to keep it.  After all, it can only go up in value from here, right?

It seems like a pretty simple concept, but it eludes many people.  And by many people I don't mean the man-on-the-street who doesn't understand the basics of accounting or taxes, but even high-flying financiers and corporate CEOs.

Take Enron for example.   One way they were able to inflate their balance sheet was to use an accouting technique called "Mark to market" - they listed assets at market prices and counted as "sold" deals that hadn't already gone through.   And of course, market evaluations of assets are always tricky things and easy to over-estimate.   So it wasn't hard to make the company look far more profitable than it was.

Another technique that is considered quite legitimate is to use "accrual" accounting methods as opposed to cash methods.   In my small business, I use cash accounting - counting only income actually received and expenses actually paid.   It is a lot easier to do, particularly when you have clients that don't pay or you have to write-off some bills.

In accrual accounting, you count invoices as paid (essentially) the moment you generate them.  And you count bills as paid when they arrive - even if they are not paid until weeks or months later.   The problem with this technique is that if a client doesn't pay an invoice or challenges it and you have to reduce or adjust it, then you have to later adjust your books to show this money, already counted as income, isn't coming in.

So, for example, you bill a client $100,000 for services.  Under the accrual method, this is counted as income before the invoice is paid.   You end the year with $100,000 shown as income and pay taxes on that amount.   The next year, however, the client declares bankruptcy, and you end up getting paid $10,000 in bankruptcy court as an unsecured creditor.   You now have a $90,000 loss on the books, which you can apply against gains for that year.

It gets complicated - far too complicated for a small businessman.   And it gets confusing for investors as well, as a company one year shows huge gains from a sale that never went through, and then huge "one time" losses the next year, when the loss from that broken sale are accounted for.   You may think a company is doing well, but the real health is hard to determine.

As you might imagine, I am a bigger fan of cash accounting that the accrual method.

I have a basic philosophy that whenever a stock goes up in value by 50% or more, I often sell out a portion of that stock to realize my gains and then invest that money elsewhere.   For example, my Berkshire-Hathaway stock went up by over 100%, so I sold half of it.   I still have have the same amount of money invested originally in that stock and I made my money back.   I've done the same with other stocks as well.

On the contrary, when I bought Bank of America stock, it tanked and stayed low for a long time.   I hung on to it.  Why?  Well, if I had sold it because I "lost money" on the stock (which I hadn't as I hadn't realized the loss yet) I would have had to do something with the money I got from realizing that loss.   Hmmmm..... Where to invest?  What should I put my money into that will increase in value.   Hey, what about Bank of America stock?   Oh, right, I just sold that.

My philosophy is that if the thing I would buy if I sold a "losing" stock is the exact same thing, I might as well hang on to it.

There are, of course, exceptions to this rule.   Say it is December 30th and I realize, estimating my income for the year, that I may have a tax problem some April 15th.   So I sell the stock, take the loss (because now we have a realization event) on my taxes - which offsets income - and then go back and buy the same stock - or something else.

The phantom profit phenomenon manifests itself when you hear about "market cap" or how so-and-so is the "richest man in the world".    That person has a lot of money - on paper.   But to say their net worth is X dollars is often a flawed statement.   If Bill Gates decided to "cash out" of Microsoft stock - sell every last share - he would not get market price for a number of reasons.  First, the market would panic that the founder was selling out.  Second, the market could not absorb that many shares at once, and prices would be depressed.   We saw this when someone tried to sell a boatload of Bitcoins all at once - the price plummeted in a manner of seconds.

This illustrates that share price is often a function of supply and demand not actual value.   People read about a stock in the paper and bid up the price, thinking that since the company was mentioned in the newspaper, it should be a good buy (no, really, people do this - and yes, I used to as well!).   Since the people who hold shares also read the same paper, they are reluctant to sell.  As a result, share prices go up.  It has nothing to do with the fundamentals of the company or its profitability.   It is just a commodity being traded, like Elvis collectible plates, when people buy and sell stocks based on popularity and trendiness.

Now, I've noted in the past that calculating your net worth is very important in understanding where your financial life is headed.   And in view of what I just said about phantom gains, you realize that a calculated net worth can be deceptive, as it is calculating phantom "paper" gains that have not been realized.   The share price of your stocks, the appraised value of your home, these are just numbers on pieces of paper, opinions on what something is worth, not the actual deal, which is what you realize when you get a buyer willing and able to consummate the transaction and pay you "cash-money" (as we say here in Georgia) for your stocks or house or whatever.

Your net worth calculation is a useful tool to see where your financial life is headed, but it should be viewed with the caveat that it is just a number on paper and not "real money" until you sell every last damn thing.   And often it will be your heirs that do that.  As we saw in January of 2009, stock values can plummet by 50%, houses can drop in value by even more than that (in some areas).   Your net worth can take a nosedive on occasion, and that is nothing to be alarmed about.

But it is a funny thing, in 2009, when my assets dropped by 50% in value, my debts stayed exactly the same, and in fact went higher.   Interesting thing about net worth, ain't it?   Market values of assets can and will go up and down.   Debts, on the other hand, have values that are as solid as concrete.   And this realization made me start paying down debts as part of increasing my net worth.   A wildly performing stock is a fine thing, and a house that has doubled in value surely is sweet.  But both types of gains can turn to vapor in a heartbeat, leaving you stuck with the debt part of your balance sheet, which stubbornly refuses to evaporate as readily.

The recession of 2008 was exacerbated by debt, at least for many people.   Stocks went up, housing prices went up, so people started borrowing more and more money.   When stocks and housing prices went down, people were stuck with debts - often more debt than they had assets.  In the boom times, they had a positive net worth.   It went negative in a real hurry once the bubble burst.

Today, it is nearly a decade later, and I am already running into people who say, "What recession?  We've never had recessions!" or they say, "Oh, you mean how Obama ruined the economy, right?"

It seems that people never learn.

And today, the stock market is at all-time highs.  Housing is at all-time highs across the country and particularly in Canada.  It all sounds so familiar to me.   We are riding a "high" of phantom gains, spending money and borrowing even more, because the market is up, and on paper we are all rich.

Meanwhile, some nagging stories about consumer debt, sub-prime loan defaults, underfunded pension plans, and insolvencies of some cities, and even States, as well as territories.   But it is all hushed away, because the party is going on at Wall Street, and no one wants to ruin a good party, right?
Newer Post Older Post Home