The Sad Story of Jim Fixx 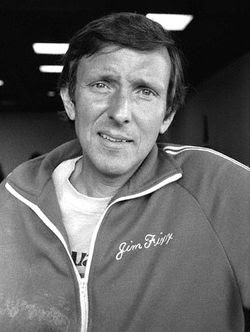 Poor Jim Fixx.   A simple visit to the cardiologist could have extended his life by 30 years.


Many people today don't know about the sad story of Jim Fixx.  You may recall in the movie Forrest Gump, Tom Hanks' character ends up brushing with greatness on many occasions - accompanying Richard Nixon to China, and later on, reporting the break-in at the Watergate Hotel.  In one vignette, they make Gump out to be a guru of the jogging movement, appearing on the cover of Running magazine and energizing a generation to get jogging.

Jim Fixx was the guy in real life - what Tony Hawk is to Skateboarding, or  Lance Armstrong is to Bicycling.   Fixx appeared on the cover of Running many times, wrote books about jogging and marathon running, and basically could be said to have ignited the whole running craze in the 1970's.

His motivation was simple - a two-pack-a-day smoker, his own Father died at age 43 of heart attack - due to clogged arteries in the heart.   He set out to quit smoking, improve his diet, and started exercising - running mostly - and lost weight and felt better.   But diet and exercise are only two parts of the equation.  Heredity is the other part, and since his Father had heart disease, he should have been conscious that he likely would as well - despite all the running and organic produce.

Sadly, he collapsed on the side of the road in Vermont one day, while jogging.  He was 52 years old.

It came as a shock to the running community.  And of course, a lot of people who ate poorly and drank too much used his death as an excuse to engage in further excess.   "See what happens?  Eat right, exercise, and die anyway!"   But that is drawing a false conclusion from the data.   As an another observer noted, Fixx would likely have died at age 43 like his Father, had he not begun running and controlling his diet.

It is just a shame he didn't consult a cardiologist back then - or have the treatments available today.   Back then, the only treatment was angioplasty, where they tried to expand the blood vessels by using a balloon.   Or they would try to scrape away the plaque in the vessels, which was a sure way to get a stroke.
The other alternative was heart bypass surgery, which my Father had - removing veins form his legs to insert into the heart to allow blood to flow.   During this surgery, they found a hole between two chambers of his heart, which he had since birth - and they fixed this.  I suspect I may have the same congenital defect - which would explain my low blood pressure.
Today, there are new options.   A heart catherterization is a process where a tube is inserted into a vein, either in the groin or arm, and up into the heart.  A dye may be used to see how the blood flows in real-time.  If a blockage is detected, a stent may be inserted, which is a metal expandable tube impregnated with a medication to prevent rejection by the body.  The stent expands the blood vessel to allow blood flow, and eventually the vessel grows over the wire-mesh-like stent.   Or at least that is how it was explained to me.

It would likely have saved Jim Fixx's life, had it been available at the time.
Newer Post Older Post Home