Why Staring At The Sun Is Idiotic 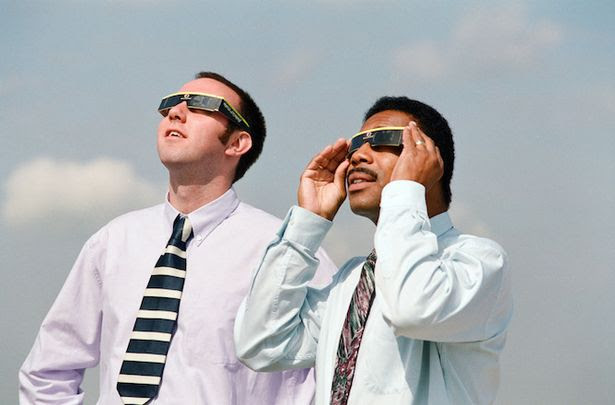 The media loves to hype things, and for some reason, this year, a relatively routine event - the periodic eclipse of the sun by the moon - is being hyped as the end-all to humanity.   I am not sure why, because we no longer live in the middle ages, and things like comets and eclipses are no longer viewed as signs of God's wrath, witchcraft, or whatever.

And in reality, it is not all that rare an event.

We are told that we "must" go to some place to view the eclipse - an event that is over in a matter of minutes - and spend thousands of dollars booking hotel rooms, flights, etc. to see this "once in a lifetime event" - which I have seen at least twice in my lifetime.

What really irks me is that the media has accompanying stock photos with most of these stories, showing grinning yuppies staring at the sun, wearing nothing but sunglasses.   Only one media outlet that I could find actually had an article about the dangers of staring at the sun (it can blind you for life) and a testimonial from a oldster who nearly did just that.

I remember the total eclipse of 1970, and back then, people were advised not to look at the sun, but rather to construct a shadow-box.   Crazy ideas like looking through exposed film were discouraged.  The media was a little more responsible back then, interested less in capturing eyeballs (no pun intended) and more in real journalism.

I am sure there will be plenty of "Eclipse Apocalypse" stories tomorrow, about all the traffic and crowds, and people visiting emergency rooms with eye damage.  And the media will wring its hands and say, "who knew that staring into the sun could be dangerous?   Who knew???"

And we will set ourselves up for the next eclipse mania, which is only a few short years from now.....