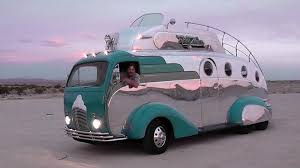 The car of the future may be autonomous, and have a bar, television, kitchen, shower and even a bed.

I'll tell you what happened, because I was there when it started.  It was the summer of 2049.  I was sitting in the bar with my friends Harry and Luke, a bunch of us former truck drivers and hourly workers, unemployed for the rest of our lives, trying to get by on the lousy guaranteed annual income.

We were drinking cheap beer and smoking inexpensive government pot, all we could afford on our monthly stipend.  It was supposed to be a beautiful brave new world, where robots would make everything and we'd all be fabulously rich.  But for guys like us, who had no education and no real job skills, we could barely afford to get by.  All the promised riches of the new industrial age were just beyond our reach.

It was Harry who started the talk.  He had a few beers in him, and he gets to talking when he's that way.  He started going on about those damn robots.  You can understand his frustration.  He used to own his own rig, and it was repossessed when he couldn't make the payments on it.  The company he was leased out to decided to go all robot, like most trucking companies have since then, and a lot of us were put out on the street without jobs.

It was about that time that Harry had started drinking heavily.  He lost his house, he lost his wife, he even lost his car.  All he had left was his Harley and they were coming to take that - not like you could even afford to put gas in it, or find a place to buy it, since everything went electric.   Harry said, "they'll have to find it first!" and he winked.  But I had no doubt eventually the Repo Man would find him and take his bike as well.

We like the bar because the beer was cheap and the government pot was affordable.  We also liked because it had a real bartender not one of these robo-servers that would become so popular in the trendy glittery disco-revival places.  It was a haven for worn out losers like ourselves.

I don't know what started it, but Harry got more agitated than usual.  He was ordering far more beers and he could possibly afford, and getting a little tipsy, swaying from side to side, cursing "those goddamn robots" that took away his job, his livelihood, and his family.

He was too drunk to be driving, much less riding his Harley, and we begged him to give us the keys. But he was a burly man and he knocked Luke flat on the floor before he staggered out the door and hopped on his bike, kick-starting it, as if to eschew even the convenience of the starter motor.

We ran out of the bar and saw him pull away, fishtailing in the gravel, certain that he would dump the bike by the end of the block.  We didn't read about it until the next day.

Apparently, from the accident report, he went out on the automated freeway.  The interstate highways have been limited to autonomous vehicles for several years now, another source of resentment for many of us who could not afford autonomous vehicles, or even to rent them through Hertz-Uber.  We had to make do with secondary roads and slower rates of travel.

Apparently Harry saw one of those quadruple "road train" trailer trucks belonging to Freightways, his old employer, and he started playing chicken with it, using his motorcycle.

He tried spoofing the sensors on the autonomous truck by swerving toward it to see if he could run it off the road.  The vehicle accident data recorder and on-board cameras recorded the entire scene.  The truck responded and attempted to swerve to avoid a collision which apparently frustrated Harry.

In a final desperate attempt to wreck the rig, he pulled in front of the truck and locked up the brakes on the Harley.  The last thing recorded on the cameras was him giving the truck the middle finger.

The rig attempted to stop but couldn't match the braking distance of the Harley.  It jackknifed, starting a chain collision of over 23 vehicles, many of them having passengers.  In addition to Harry, three were killed and 15 injured, as the vehicles were traveling well over 100 miles an hour and spaced only a few feet apart.  And because of complacency, many in the autonomous cars and buses were not wearing their safety belts.

Well, that's how it got started.  The next day some of the more radical online news sites were hailing Harry is a hero.  One of the more conservative outlets called him a "Techno-Luddite" and the name kind of stuck - and was adopted with pride by others like Harry.  Suddenly there was a wave of robot-bashing going on and it took off across the planet.

People started tipping over and smashing the security 'bots and home delivery 'bots that had been plying the sidewalks of the cities for years.  Inner city residents didn't need much encouragement to start smashing security cameras and security 'bots which had been patrolling the ghettos.

An angry mob smashed the glass walls of an Apple Store, pummeling their new iBots with sledgehammers and spray painting "Humans Rule!" on the walls.

Of course, they had to call out the National Guard to quell the rioting, but that only stopped the more overt acts of violence. Many people started doing minor acts of sabotage to disrupt the robot economy.

Of course, politicians were apoplectic.  Many proposed raising the guaranteed annual income so that the massive number of unemployed people could afford robot-made products. The robot economy had been a boon to the upper classes who could now purchase vast amounts of expensive consumer products including elaborate autonomous vehicles.  But for guys like me and Harry, it only meant existence, wanting but never having.

The robot economy worked well for you if you are rich.  You could afford to buy an autonomous car that had a built-in bar, stereo surround sound system and flat screen TV . Some were even equipped like private coaches with beds and showers. You could get into your autonomous bus and travel between cities overnight. arriving the next morning refreshed.  But such a vehicle cost hundreds of thousands of dollars.  Out of the range of us average Joe's.

The rest of us had to make do either with used non-autonomous vehicles driving on secondary roads, or calling a Hertz-Uber, if we could afford the fares, which were constantly going up, particularly once the vandalism started taking off.

Some proposed in Congress to pass laws mandating make-work jobs be created for the unemployed. The idea was two-fold: to pay them a salary to allow them to buy some of these wonderful robotic produced goods, and also to keep them busy and part of the establishment so they wouldn't riot and smash things.  But of course that legislation never went anywhere.

It remains to be seen whether Harry started a movement or just sacrificed his life for nothing.  He certainly set off a chain of events which has caused an awful lot of chaos.

As for myself, I finally found a job working as a security guard.  They haven't been able to arm the robots yet due to legislation passed by Congress, so they still need warm bodies behind the guns to maintain order.

I'm not sure Harry would have approved, but hey, it's a job.

This is one scenario that could happen, I suppose, if we let it.   Robotics could liberate us as a species to live more leisurely and productive lives.  Or it could enslave us, making a very few people - who own the robots - very, very rich.
Newer Post Older Post Home