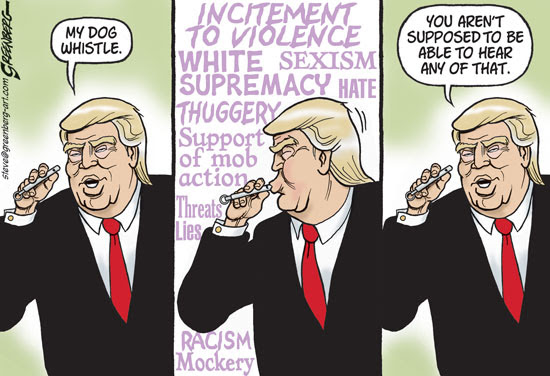 Is  Trump just tone deaf or is he dog-whistling the far-right?


A lot of ink has been spilled about how Trump handled - or more precisely, mishandled - the protests and violence in Charlottesville.   The Police mishandled it as well - allowing people to show up at a rally carrying weapons.   Boston showed us how free speech and personal safety can go hand in hand - and no, carrying an axe handle to a protest is not "protected speech" under the constitution.   And no, that was not a question - nor an invitation to discussion, but a statement of fact.

The problem is, of course, that whatever crazy shit Trump says, always has some nugget of truth behind it, which often gets lost because he is the most inarticulate President we've had.   Ronald Reagan was "the great communicator" and even if you disagreed with his policies, you could understand what he was saying.   George W. Bush lowered the bar considerably, speaking in sentence fragments and inventing new words.

Our Reality Television President speaks in the 140-character lexicon of Twitter, and thus doesn't get even his half-assed points across.   And as a result, his message is muddled.   As I noted in an earlier posting, folks who attend protests carrying weapons are just plain wrong, and it doesn't matter if they are alt.right or "antifa" or anarchists or whatever.  Trump called that out as wrong, and then one mentally disturbed white supremacist decided to use his car as a weapon, and all hell broke loose.

Trump's refusal to disavow white supremacists and nazis right away was viewed by many as a dog-whistle to the far-right.   The KKK certainly thought so - that Trump was giving them a nod and a wink and saying "job well done, boys!"   His later comments about confederate statutes and equating Confederate terrorists (e.g., Nathan Forrest)  with our founding fathers further muddied the waters.

Again, there is a nugget - a slim nugget - of truth here.  If we take down statues of slave owners, not only Confederate generals but also founders of Harvard (which has happened already) then where do we stop?  Statues glorifying Jefferson, Washington, and the rest of the gang - who all owned slaves - could be seen in the same light.

Of course, what Trump fails to realize is that these Confederate statues were erected years later, often during periods where the KKK was resurgent, or during periods of de-segregation.   It is like the "In God We Trust" motto, which replaced "E Pluibus Unim" during the height of the civil rights era and the height of the "prayer in school" debate.   The words "One Nation, Under God" were also added to the pledge of allegiance at about the same time.  And yet many people would think these things trace their roots back to 1776.

The message of the Confederate statue in a public place is clear - it is asserting that the government is endorsing the "lost cause" of slavery and honoring the "heroism" of people fighting to subjugate an entire race.   And no, their heroism is no cause for celebration, any more than the heroics of those who fought for the Nazi cause are to be honored.  In fact, in Germany today, it is illegal to "honor their legacy" and there are no discussions there about "heritage, not hate".

The Civil War was a slaughter of human beings - the most vicious and deadly war America has ever fought in, killing more people than all our other wars combined.   And it was fought over a principle so vile it defies explanation.   The people who claim a connection with this "heritage" are using it as a smoke-screen to advance their cause of racism.   My Great-great-great Grandfather Robert S. Thompson fought as a Colonel for the Confederacy.  He also owned slaves.   I am neither proud of his "heritage" or ashamed of it, because genealogy is pure bunk and I have little or no connection to him, other than a few stories of only three sentences long, told to me by my racist Grandmother, many, many years ago.

People who tell you they have some deep spiritual connection with their "rebel" ancestors are basically lying.   Unless they are historical re-enactors (who are largely harmless, if not a little creepy and boring) odds are, their display of rebel paraphernalia is a smokescreen for advancing racist views.

We are in rural Ohio right now, following the Ohio river up past one abandoned factory after another (and a few still in business).  This is Trump country, and we've laughed at how many cars and pickup trucks we've seen with Ohio tags and Confederate flag stickers on them.   "Heritage, not hate" - right?   But these history buffs seem to have forgotten which side of the Civil War that Ohioans fought for.

As for Trump?   I just assume he isn't smart enough to dog-whistle the right.  He's just an horrific communicator with muddled ideas.