Another Day, Another Invoice Scam 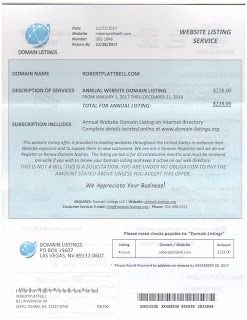 This letter arrives in the mail offering to "list" my website.  I wonder how many people pay this without realizing it means nothing.  Click to enlarge.


I wrote about invoicing scams before.  They are a pretty neat scams, too.  You just mass-mail invoices to companies and hope that some of them pay them.   If you send out 1,000 invoices, at least 10-100 people will pay them, and the amount is so small they won't bother suing you to get their money back.  Better yet, whoever paid the invoice will be so embarrassed and worried about losing their job, they will "bury" the mistake so no one finds out.  Embarrassment is the con man's best friend.

Even better, it's not really a scam.  The scam artists have realized that if you put language in the invoice that "this is not an invoice but a solicitation" that they have covered themselves.   It's right there in large print, on the front page.   If someone pays the "invoice" they have voluntarily responded to a solicitation to have their website "listed" (whatever that means) by the company.   So even if they wanted to sue this company, they would have no grounds to do so - people are presumed to read invoices carefully before paying them, right?

But a lot of people don't read the fine print.   In fact, some people pay off non-existent debts, when a debt collector calls.   They just assume they must have taken out a loan somewhere in the past that they forgot about - sort of like winning the "Microsoft Lottery" - they assume they forgot they entered that as well.  In that regard, this sort of scam does victimize those in the early stages of dementia or those whose intellect or cognitive ability is lacking.   In other words, they prey on the weak.

This sort of letter is one reason I am glad I am retiring.   I do have a registered domain name, and it is paid up for another decade or so, with Network Solutions, which I registered with a long time ago before they became, well, more on the dark side.   Today, I get countless e-mails from them exhorting me to "renew" domain names I don't have, such as the .xyz domain name I never registered for.

They prey upon anxiety - that you will "lose" your domain name through negligence - and this does happen on occasion, and some smarty-pants snaps up your domain name and you are out on the street.   But the e-mails I get from Network Solutions - and others - are usually offers to Search Engine Optimize my domain, which I don't really need to do, as I am retired.   And like I said, I am glad to be retired and out of the game, because lately it is a game not worth playing.   Everything, it seems, is some sort of scam or con.

I recounted before how Al Gore said we were morphing from a manufacturing based economy to an information based economy and he was right about that.  But I think we have taken it one step further - going to a fraud-based economy.   In the future - if not today - we will spend all day long defrauding each other, using cons and scams of various types.  I defraud you, you defraud me, we all go home happy.  A lot less messy than actually making and doing things.

And today, we have the scammer-in-chief, who used to run his own "for profit" universities, and left Atlantic City a ghost town of closed and bankrupted casinos.  In fact, he has left nothing but wreckage in his wake.   He is the king of cons, and we are all being conned.

So today, we don't invest in things, we invest in nothing.   And that is what Bitcoin is - investing in nothing.   It is the Seinfeld of investments, a show about nothing.  An idea of a currency, but not really actually anything.   It perfectly describes our era like nothing else.   Why bother with old-school "products" and "services" when you can cut to the chase and just create an investment which is just, well, nothing at all, but something you invest in and watch the price go up and down?  Why not?   A lot less messy than actually having to deliver on promises for cab rides or electric cars, which are so hard to make or do.

It is a strange new world we live in.   Sometimes I wonder why we chose it.   Because we did choose this, somewhere along the line.