Cristalino is an inexpensive Brut Cava (Spanish Sparkling Wine) that sells for $6.79 a bottle at BJ's wholesale.


Note:  This is an updated Posting for New Year's Eve.  If you are looking for a good inexpensive sparkling wine, Jaume Serra Crisalino is a good bet.  And don't just drink it for New Year's.  This is a good everyday wine!  Updated again for 2017!

Americans have an odd relationship with sparkling wines or Champagne.  We tend to view Champagne as something for very special occasions - launching ships, getting married, anniversaries, or New Year's Eve.

And this is a shame, as Champagne is just wine - and it should be drank at all occasions, even with a TeeVee dinner.  There is no need for special occasions to drink good wine - sparkling or not.

If you read Hemingway's stories about cafe society in Paris, you'll know that he and his friends would sit around all day and drink "wine" at Le Dôme or wherever, and often this "wine" was in fact, Champagne.  No one felt that it was something to be saved for New Year's eve!

Americans, in contrast, tend to view Champagne as something staggeringly expensive and special, to be used only on occasions when you want to put on the dog.  In the Rap world, up and coming Rap stars drink Louis Roerder's "Cristal" for $600 a bottle at the strip club.  I drink "Cristalino" for $6.99 a bottle.  As it clearly says on the label, "Not to be confused with or associated with, Louis Roerder's CRISTAL."  Thanks, got that.   The price tag gave it away.

By the way, as part of the NAFTA agreement, we are supposed to respect the rights of the Champagne makers in the Champagne region of France, by only calling sparkling wine from that region of France, "Champagne".  Of course, as Americans, we are not bound by what a bunch of Frenchies say - although it is in bad taste to call your Korbel, "California Champagne" - as you are fooling no one.  If you see an American sparkling wine that is labeled "Champagne" you can bet is probably it is not very good.

There are a lot of sparkling wines made all over the world that are very worthy, even if they are not from the Champagne region of France.  Spain has its Cava, Italy its Prosecco.    Many Americans wineries just call it Methode Champagnois, which gets the idea across.
Ironically, the French, in trying to preserve the exclusiveness of the term "Champagne" have only raised the awareness of Prosecco and Cava, which are now known in their own right, by their own names, rather than as "Spanish Champagne" or "Italian Sparkling Wine".  The entire thing has backfired on the French.  The only ones damaged by it are French producers who are not in the Champagne region, who now have to use the Methode Champagnois or "French Sparkling Wine" monkiers.
By the way, there is no big secret on how to make good Champagne or sparkling wine - the soil is the big deal - the chalky soil of the Champagne region extends under the English channel to the white cliffs of Dover.  Thanks to global warming, the Brits are now planting champagne grapes.   We'll see how that works out.
The real Method Champagnois developed by the Widow Cliquot and (supposedly) the monk Dom Pierre Periginon is very labor-intensive.  The wine is fermented in the bottle, neck down, and rotated ("riddled") periodically.  In France, the man who rotates the bottles is called a "Riddler" (take that, Batman!) and is a highly skill professional.  Once the wine is fermented, the neck is frozen and a slug of yeast and junk is removed.  Freezing the neck allows this to occur without losing the wine.  A small amount of additional wine is added (from another bottle, sacrificed for the cause) and a second fermentation takes place.   Sounds pretty far-out, eh?  But that is how it is done, if it is done right.  Cheaters try to ferment in a tank, or (gasp!) artificially carbonate the wine.

And many of these sparkling wines are quite good and relatively inexpensive - on the order of $8 to $20 a bottle - certainly not anything that prices it only for "special occasions".  And yes, some of these are even French sparkling wines, and yes even some French Champagne can be rather inexpensive.

And with wine, like anything else, there is no "right" or "wrong" taste in the beverage, although enthusiasts tend to favor certain brands and types.  I have a friend who likes Korbel - she likes the taste of it.  She can easily afford Dom Perignon, but prefers Korbel.  That is the great thing about wine - there is no right or wrong answer, only what you like.  And if what you like is cheap, well, so much the better.

Although for most of us, our pocketbook dictates where our selection lies.  There are a number of great Cavas and Proseccos out there for not a lot of money..

The Cristalino Cava caught my eye at the store because of the prominent disclaimer on the label - which any Trademark Attorney would understand.  It is akin to putting a Rolls Royce grill on a Toyota, and then painting on the side of the car, "This car is not a Rolls Royce, nor is it endorsed by Rolls Royce".  Sort of tacky.  But it made me chuckle.

But that's Trademark Law for you.  I kind of like the fact that they did not back down on the name.  And sorry, no, Mr. Roerder, there is no "likelihood of confusion" in the market place between Juame Serra Cristalino and your overpriced Pimp juice (which most wine enthusiasts say really isn't all that great, but the Rap stars keep driving the price up, wanting to buy "the most expensive Champagne" and Dom just won't do).

But if they wanted to change the name to Juame Serra, that's OK with me.  I'm just guessing, but I'll bet they had priority in the use of the name, or the "CRISTAL" people would have shut them down.

It is a nice Brut Cava, good for a day at the beach or a nice dinner party, and it won't bankrupt you at all. 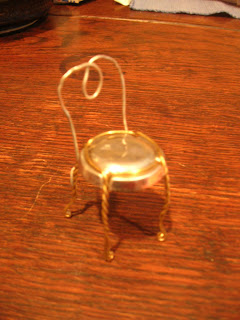 When you are done drinking the contents, you can make a little chair from the cap. 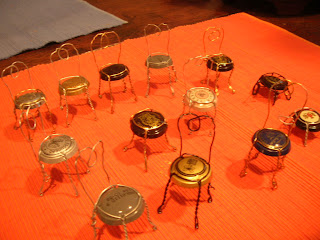 Or a whole lot of little chairs, if it is one of those kind of parties.

Some modern sparkling wines are going to a beer-style cap.   There is nothing wrong with that, and it illustrates what sparkling wine really is - grape beer, in a manner of speaking.

At $6.99 a bottle, there is no reason that sparkling wine should be a New Year's and Anniversary kind of deal.  Keep a few cold bottles in your fridge - and use them regularly. 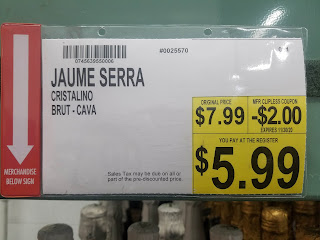