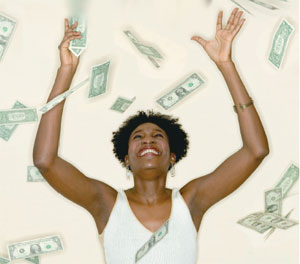 If you won the mega-millions lottery, your life would change in a whole lot of ways - and not pleasant ones.


We live on old people's island - full of retired New York State schoolteachers.  Pretty middle-class existence and very quiet.  Next door is rich people's island - where people build mini-mansions and drive luxury SUVs and pretend to be rich - until the money runs out, and the money always runs out.

You can't drive over to really, really rich people's island anymore.  Even the maintenance staff has to take a shuttle bus there.  But occasionally they have concerts there and you can go and see how the other half lives.   And while I was there, I picked up a magazine they had laying around.  It was fascinating.   In addition to ads for multi-million dollar vacation homes, were ads for cars that started at $100,000 each and went up - way up - from there.   There were ads for private jet companies and whatnot as well.  And jewelry - lots of jewelry.

There were also ads for various security services - body guards, burglar alarms, and whatnot.  One ad showed young rich kids playing with an enormous German Shepard.   The company touted that they could provide trained German Shepards that would be gentle with your children, but rip off the gardener's leg, if he didn't enter his security code properly.  It was very interesting - this anxiety that the very, very rich have, about being assaulted.

Turns out to be an anxiety that is rooted in reality.  If you won the big lottery and had nearly a billion dollars, you would have all sorts of problems.   Having friends and family members kidnapped would be one of them.   And it goes on more than we think.   We never hear about more than half the cases.   We only hear about things when they go wrong.

There is a new movie coming out about the Getty kidnapping.   But there are other high profile kidnappings (that we know of) out there as well.   The Lindbergh baby, Freddy Heineken, Patty Hearst.  In fact, the list goes on and on.   If you are mega-rich, you need a bodyguard - and hopefully the bodyguard isn't in on the kidnapping.

People don't think about this, but if you were to win the powerball lottery and got a check for $500 million, your life would change dramatically.   And I am not so sure that having a fancy house and a fancy car would make up for that.   Being rich would become a full-time job.   And you'd have to become a lot more paranoid about people in general.

Suddenly, being an average everyday ordinary schmuck doesn't seem like such a bad deal.   I recounted before how Howard Hughes had old jalopies rebuilt so as to be reliable, but to look like dented, rusted old cars on the outside.   He had one made for Katherine Hepburn, and she enjoyed being able to go out and shop at the grocery store without being mobbed by photographers and fans.  "Say, did anyone ever tell you that you look exactly like....?"

It turns out when you are mega-rich, being a schmuck is a big treat now and then.   Not being in the spotlight and not being a target is a pleasure.   Something to think about.

The penalty for kidnapping used to be death, which was problematic and illustrates why extreme sentences are often less of a deterrent to crime.  In the drug wars, the sentence for dealing drugs was often harsher than that of shooting a cop - so drug dealers did the math and figured they had nothing to lose in shooting someone, if it meant the possibility of getting away.   Similarly, for a kidnapper facing a death sentence (or a life sentence) killing the kidnap victim to eliminate a witness is a calculated decision.   And perhaps that is one reason why kidnap victims often end up dead.

Quite frankly, one reason I stopped buying lottery tickets is the dread of winning the lottery.   I am not a rich person by American standards (maybe by global ones, which is why I don't go to Mexico anymore) and can live a comfortable, fairly anonymous life.  If I won the lottery, it would upend my life, and I would end up a prisoner on very, very rich people's island, wondering which one of the many service employees I had hired would end up kidnapping me for ransom.