Why The Democrats Strategy Will Backfire 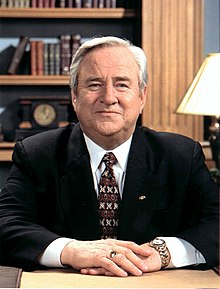 With the forced resignation of both Senator Al Franken and Representative John Conyers, the Democrats are heading down a new path and strategy to try to win elections in the future - winning elections being something they have not been very good at recently.

Sadly, their strategy I believe will backfire, based on history and demographics. The Democrats are hoping to claim the moral high ground by arguing that anyone who wishes to run for public office should have a squeaky clean background.

The problem with that strategy is that it has been tried in the past and failed.  You may recall in the 1980's when Reverend Jerry Falwell (pictured above) claimed to lead something called the "Moral Majority" and the Republican Party argued that in order for anyone to run for public office they had to be of a particular moral caliber.

The Republicans argument was that it was irrelevant what a person's position on the issues were or how they would vote on a particular piece of legislation - things that would actually affect the lives and outcomes for the nation's voters.  Rather, we should judge our candidates by the ambiguous and nebulous "moral standards" which often were interpreted in favor of the Republican Party.

Of course, the problem with this type of political argument taking aside the fact that is not really a political argument at all, is that it often backfires spectacularly.  During the Moral Majority crusade era, more than one Republican was forced out of office after being found with his pants down, often in a public restroom.  This is when the term "Wide-stance Republican" came into vogue.

The other problem is that what you may consider a moral or immoral, the other party may consider perfectly fine.  Thus, for example Democrats would not have any problem with a legislator being homosexual but Republicans would.  One man's morality is another man's immorality.

And the same is true in this Judge Roy Moore situation.  If Roy Moore was accused of dating 16 year old boys in Alabama he would be shunned from the Republican party.  But since he was dating 16 year old girls, they are less concerned.  The age of consent at the time was 16 so he was arguably doing nothing illegal.  And Republicans, particularly male Republicans, see little wrong in a 30-year-old man dating a teenage girl, provided she's above the age of consent.  As to the accusations he dated a 14-year-old girl, I am sure many Republicans would sweep this aside as either being fabricated or merely saying "well, she looked like she was 16!"

As the last election illustrated, Republicans, even Republican women, are less concerned with moral issues that electoral ones.  They voted for Trump not because he "grabbed pussy" but because he would nominate a Supreme Court Justice - something that would have a greater impact on their lives for decades to come - long after Trump is dead and gone.   They are more interested in the big picture, not mud-slinging accusations, even if the accusations are true.

And that is why they are supporting Roy Moore.  They care less about his personal life or transgressions than having another vote in the Senate.   Alabamans will vote on the issues, and they would rather have a child-molesting Republican voting on tax reform than a squeaky-clean Democrat voting against it.  The Democratic party seems to forget this - you cannot run for office based on scandals of your opponent.  Somewhere along the line,  you have to run on your platform, and get voters to want that platform.   It is not you they are electing, but your votes on the bills.

So this moral crusade of the Democrats really won't affect the Republican Party much. And I think it could actually turned away many voters from the Democratic party as a result.   While it may cement the loyalties of Democratic women, it won't cause the hard-core Republican women to cross parfty lines.

And for the men?   I have seen more than one man shift uncomfortably on his bar stool when the topic is raised, as he knows full well that he may have played a little slap-and-tickle 20 or 30 or 40 years ago and is worried now about being held to account for it  In the old days pinching asses and cupping breasts was, well, a way of life in many parts of the country.  Such men are not quite ready to embrace the entire pussy hat movement.

The Democrats will do little in terms of gaining votes with this strategy and argubly may turn away male voters.  While no one endorses sexual harassment much less sexual assault, the Democrats risk coming across as a preachy organization, a bunch of Carrie Nation's with hatchets ready to chop up the saloons. This could backfire in a big way.

This entire hysteria - I use the term hysteria not pejoratively but in the actual sense of its meaning - started with the accusations against Harvey Weinstein which indeed were very serious. Non-consensual sex, rape, and sexual harassment in the workplace are not funny. But as the weeks unfolded, accusations started to fly, some deadly serious and others seeming really trivial.  "He made me feel uncomfortable" doesn't quite rise to the level of rape.  Nevertheless, the media treats both accusations at the same level.

While these moral values are important, the Democratic party should think long and hard before making this the centerpiece of their party platform - after all, it didn't work for the GOP in the 1980's and 1990's, either.  And in fact, it raises the hypocrisy level somewhat in that Bill Clinton, victim of the Republican's moral crusade, was protected by the Democrats back then.   Maybe both sides are wrong to embrace morality as a political test.

Because, when you get right down to it, the morality of our elected officials doesn't really affect the country much.  No, little Billy doesn't "look up" to elected officials as exemplars of moral behavior.  Odds are, like most Americans, he can't name his Senators and Representatives anyway.   But the laws those elected officials pass are of more importance to little Billy down the road.  And if we use this "moral" litmus test to see who can and cannot hold office, we may end up with a lot of really shitty laws being enacted.

But hey, we will have the satisfaction of knowing our immoral laws were enacted by moral people.