You Can Lead A Horse To Water... 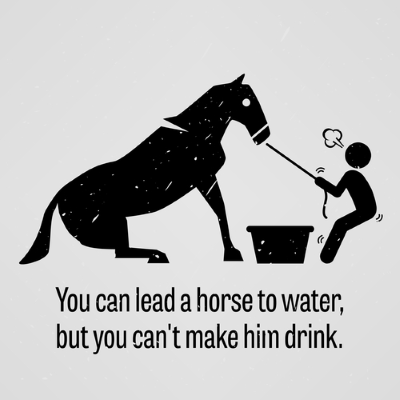 There is an old saying about leading a horse to water.  Don't bother - you'll just annoy the horse!


I write this blog for my own amusement and to clarify things in my own mind.   I am not in the business of giving advice, preaching, or "telling you what to do."  If you get something out of what I wrote, fine.  Even if it is just amusement.  If you don't like what I have to say, don't read it.  It seems like a pretty simple proposition, but it gets lost on many.

I get e-mails from some folks saying that not only am I wrong about everything, but I have no right to even say things in my blog!  This is the bizarre new world we live in, the post-truth era of alternative facts.   Shouting down contrary ideas is the new vogue.

I also get supportive e-mails, which is nice.   One reader writes that they tried to talk a sibling out of investing $5000 in some cockamamie startup company.  The sibling made only $35,000 a year, so five grand was a lot of money to them.  And invested over 30 years would come to about $40,000 in retirement. Not a lot, but a lot  more than $5000 and a lot more than zero.

But the sibling would have none of it, and I could have told him to save his breath.  You can't "fix" people as I have found out the hard way.  You can't save people from themselves and if your friend is driving their car off a cliff, the best thing you can do is make sure you are not in the back seat.

Sure, that may sound "selfish" but as I have explained time and time again in this blog, the greatest thing you can do for humanity is not to go out and save the world, but save yourself.   If there is one less person in the world who is wandering around clueless in life, then you've done humanity a favor.  Fund your own life and retirement.  Make sure your oxygen mask is secure before you go and try to help others.   Maybe when you die, you can leave something to charity.  But if you squander your life energy on "saving the world" and end up broke, not only are you not helping others, you are now an additional burden to that world.

If you look at this from a decision matrix point-of-view, there are four possible outcomes if you try to dissuade a friend from buying some idiotic investment.   You could be right about it, you could be wrong, they could take your advice or not.

If they take your advice and you were wrong, and the investment takes off like a rocket, then you are really in trouble.  Not only did you annoy them about their life choices, you were wrong about it.  This is why I don't give advice - I have a hard enough time keeping myself together.    Well, that and when you give advice, people take half of it, mis-apply it, and then it all goes wrong and they blame you.  But getting back to our matrix, this first outcome isn't likely (idiotic investments rarely pay off) but you can see the outcome isn't good for you.  So why risk it?

The second outcome is that they don't take your advice and the investment takes off.  Again, not likely, but they will tell you what an idiot you were and you end up looking like a foolish old fuddy-duddy, so why bother?  Better off to keep silent.

The third outcome - and the most likely - is that they invest the money (ignoring your advice) and it fails miserably (as most of these startup deals do, even the "legit" ones).   Now they are mad at themselves for losing all that money and mad at you, too, as you are the smug bastard who said, "I told you so!"   Again, best to not have said anything at all, other than, "Oh, what a great opportunity, good luck with that!"

There is a variation on the third outcome - it all goes horribly wrong and then they blame you for not warning them.   Yes, it sounds crazy, but this has happened to me with an inventor.  After I explained carefully to them why the invention broker they were talking to was trying to rip them off, they went ahead and gave them $10,000.  A year later, they call me and berate me for not warning them about what a ripoff these people were - when I explicitly told them it was a ripoff.   Human nature is a nasty thing, and no one wants to blame themselves for their problems - they want to externalize them.  So in their mind, it was you who said it was a good deal, not a rotten one.   Best to keep silent!

The fourth variation is less likely - they take your advice and don't invest in the rip-off scam or whatever, and your advice was correct.   Don't expect any thanks.   In fact, they will still be pissed at you for pointing out their foolishness.   Also, this is a very unlikely outcome.  Most of these raging true believers invest in spite of your warnings, so again, why bother?''

As you can see, there is little personal gain in "leading a horse to water" and a lot of downside.  You will lose a friend, or there will be angry words exchanged at the Thanksgiving dinner table.

It's not a pyramid scheme!

So when a friend or relative wants to do something stupid, well,  you might calmly point out the risks involved, but don't get into an emotional debate with them, as it simply isn't worth it.   And for God's sake, never loan them money.  In fact, distancing yourself from unreliable or unrealistic people is probably a good idea, because odds are, they will start asking you for money down the road, and you might as well cut to the chase.

The problem with long-shot investments is that the laws of probability are weighed heavily against you.   It is what I call Quantum Investing.   Sure, there are one or two people who win millions at a Casino.  But there are thousands who win nothing or lose horrendous sums of money.   Sure, you might be able to ride a motorcycle without a helmet and not get hurt.  But those who do get hurt (which is every motorcyclist, if they ride long enough) can be horrifically injured or killed.   Is it worth the risk?

The plebes of the world - you and I - are not likely to strike it rich.   But we can comfortably strike it middle-class comfortable without too much effort.   Risking large sums of money on improbable outcomes is just a risk we can't afford to take, when we have so little and are trying to get by on salaries.

Yes, the big-time players in the world can afford to throw millions at some sort of startup.   They can afford to take the risk.  They also know they can hype that startup and later on sell shares in an IPO to the "little people" like you and me.   We give them a few hundred or a few thousand each, and they take in millions.   This is how the 1% got to be the 1%.  They didn't steal our money from us, we begged them to take it from us.

And it goes on even today - in fact, right now.  People are lined up to buy Bitcoins, making a thousand people who own the bulk of these "coins" very rich, while impoverishing themselves.   And so long as human nature is as ugly as it is, the racetrack, the casino, the con artist, the IPO, and the roulette stock market will continue to fleece the plebes.

But that is their choice in the matter, not a mandate.   And sadly, no amount of talk will convince them otherwise.  In fact, as I noted above, they will shout you down and say "how dare you!" for disagreeing with their world view!

Keep your own counsel and look out for yourself.  It sounds selfish, but it the best thing you can do for yourself and society at large.
Newer Post Older Post Home