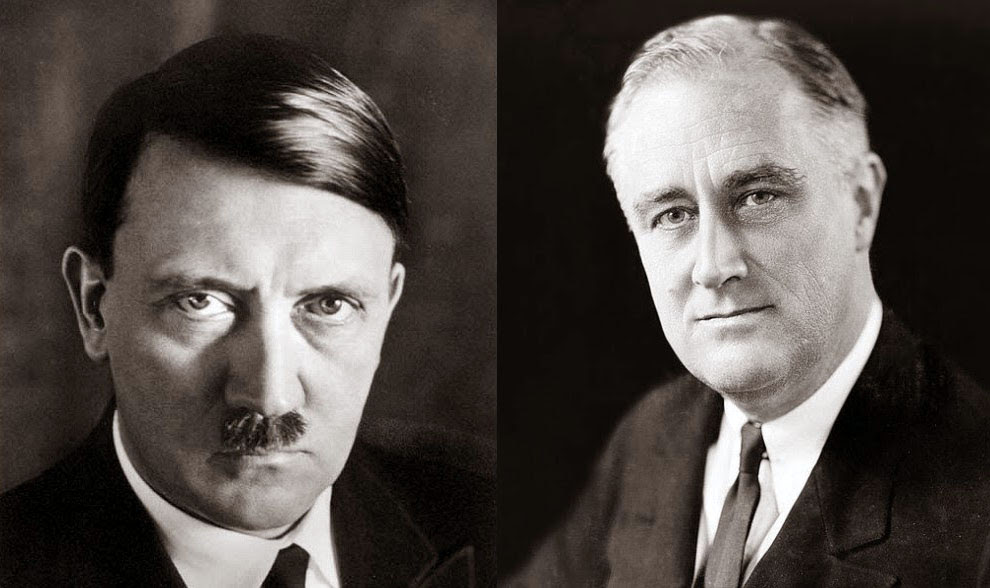 One was an alcoholic, a serial philanderer, and a cripple, the other a fitness nut, a vegan, and a tee-teetotaler.   The greatest President in American history, and the world's worst mass-murderer.   By today's "character" standards, who would be elected?


The Roy Moore election is today, and it would not shock me if he won.  The Democrats, not having a coherent platform to sell to the American people, have decided that "character" is the key to winning elections - a flawed premise that I pointed out never worked well for Republicans decades ago.   Bill Clinton won election - and re-election - despite his character flaws and sexual harassment incidents.   And the GOP's attempt to impeach him for lying about sex just came across as idiotic and indeed, accomplished nothing.

Of course, back then, the Republicans thought that the American people would turn against Clinton for having sex outside of marriage, when the divorce rate in America was running 50% or thereabouts.    Republican strategists thought (and many still think) that voters have two sets of morality standards, one for themselves, and another for elected officials, who are supposed to be "role models" for us.

But I think voters are smarter than that.  They know that it is policies that count, not character.   And they vote Democratic or Republican based on the perceived policies that each candidate would endorse.   Short of outright fraud or corruption, the "character" issue is really secondary.   And the Democrats' reliance on this strategy has really been more of a self-destruct mode than anything else.   When firing a weapon, the first thing you do is make sure it is aimed away from you.   More Democrats have been hounded out of office than Republicans, by my count, as a result of this "me too" movement.

President Trump correctly points out that he needs that extra vote in the Senate, and whether Roy Moore liked young girls or not is secondary to his needs to push his half-assed tax bill through Congress (and it is half-assed, which is becoming clearer with every passing day - the "deliberative body" of the Senate deliberated less than a month over the greatest tax overhaul in a generation).   And the voters of Alabama care more about confirming another conservative justice on the Supreme Court - one that will vote to overturn Roe v. Wade.   That is the political math they are doing.

Meanwhile, the Democrats flounder.   Their platform seems to be based on allowing unlimited illegal immigration, or legal immigration with little or no vetting from countries which export terrorists on a regular basis.   Every terrorist incident reinforces Trump's position and makes the Democrats look ridiculous and weak.   It's OK to be a Democrat and acknowledge that a country has a right to control its borders - in fact, that is sort of the definition of "country" if you look it up in the dictionary.   A country with uncontrolled borders no longer is a country.

But for some reason, the Democratic party is stuck in an anti-Trump mode.   Whatever Trump says, they have to play "Mr. Opposite" - a silly child's game we played as a kid, where one kid would do the opposite of the other.   The problem is, like it or not, as despicable and inarticulate as he is, Trump is sometimes right about things - a stopped clock is right twice a day - and it is silly to take the opposite position on everything just to be the opposition.

Take the corporate tax cut.   Obama pushed for a 25% rate, which is not far off the 20% rate passed by both houses and the 22% rate being discussed now and approved by Trump.   As I explained in earlier posts, only in America are corporate profits taxed twice, at the corporate level and at the shareholder level.   Fixing this idiotic double-taxation or at least adjusting rates to make them competitive is something both parties could agree on.   But the Democratic party line is, "Cutting corporate taxes is a giveaway to the big, evil corporations!" which resonates only with college students and other idiots.

And the press is no help.   Not only are they validating Trump's perverse use of the term "Fake News" by sloppy reporting, their choices for news story topics seems to reinforce the idea that they are out to get Trump.   The New York Times and Washington Post revel in gossipy stories about who is in or out at the White House.   Who will be fired on the next episode of White House Apprentice?  Stay tuned, the ratings are boffo!

Or they publish articles about Trump yelling at people or eating too many Big Macs.   This has nothing to do with politics, just personal attacks making him out to be a boorish, overweight man with a short temper (we already knew that, thanks).   The problem with this kind of "reporting" is that we've seen it before - the same kind of drivel the right-wing press did back in the 1990's, breathlessly reporting how Hillary and Bill had knock-down, drag-out fights in the White House, with Hillary "throwing a lamp" at Bill (wouldn't you?).   That wasn't journalism then, it isn't journalism now.

But of course, detailed policy discussions are boring and don't sell newspapers - or today, eyeballs and clicks.   They get more hits from "Hooray for our side, boo on the other guy!" kind of stories.   And sadly, this is what passes for political discourse these days.

People I meet today, left or right, Republican or Democrat, don't really have policy positions or opinions.  They root for politicians like they do for football teams.  They have allegiances to their team's colors and mascots, but little else.   When you ask them what is so great about their candidate, all they do is run down the opposition candidate with attacks on their character and whatnot.   Very little of political "thought" today is political.

And that is a danger.  Because unless you can engage people with your platform, odds are, they will change team allegiances at a whim - such as the cases of young men who were "Bernie Babies" who quickly morphed into Trump supporters when their candidate wasn't nominated.   They had no political compass, but rather were just choosing up sides for a game of dodge-ball in gym class.

The Democrats now believe the problem they face is that they are not left enough.   So they will run in 2018 and 2020 on a platform of more welfare for all - probably with "guaranteed annual income" thrown in for good measure.   Should welfare recipients have to pass a drug test?   No way - other than perhaps to qualify them for their free medical marijuana, right?   And hey, let's just open the border and let anyone walk in.   If they stay for a few months, they can stay forever, right?   That should resonate well with the majority of Americans.

The end result - dare I say it - will be eight disastrous years of Trump.  A supreme court packed with right-wingers for the next three decades.   A country that will not look much like the country we live in today.   The only thing that might change this outcome would be a major recession in the next six months.

And I am sure there are Democrats rooting for that, too.   And sadly, from all the signs I am seeing, it looks like it might very well happen.   When you hear about people mortgaging their houses to buy Bitcoin, you know the end is nigh.

UPDATE:  A friend posits that the recession will kick in in April 2018, "after next tax season".   I suspect his timing is about right, but you can never be sure!
Newer Post Older Post Home