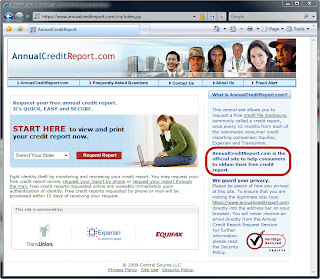 It's that time of year again.  Time to go see a movie and get Chinese take-out - and run my Annual Credit Report.

Christmas is a dull time, nothing to do except see a movie and get Chinese take-out.  Everything else is closed, although this is changing as retailers realized everyone is bored out of their minds staying with family, so they want to go shopping.
Myself, I run my annual credit report - although at this stage in my life, I really don't need to do so, as I have no debts and no need for debt.
(And by the way, if you want your free annual credit report, go to annualcreditreport.com for the real deal, not that faked-up "free" one which is a scam. )
Nevertheless it is an interesting exercise and a good way to monitor for illegal activity involving your credit.
And it provides some insights, too.  Profound ones.  I came away with several:

1.  I took out a lot of mortgages in my life, many of them re-fis.  I paid a lot of fees to refinance debts, which was just a way of moving debt around and creating more debt, over time.
2.  I had a lot of credit card debt at one time - tens of thousands of it.  I am lucky I had the assets to sell to pay them off.  Most folks don't.  The amount of interest paid, over time, was staggering.
3.  I had a mortgage payment of over $2700 a month at one time - on a 30 year note.  Do the math on this!  The income stream needed to support that debt load was well over $100,000 a year.  And for what?

This last item was illuminating.   If I had paid off the note on that loan, I would have paid nearly a million dollars, over time, on a loan having a principal of $350,000.
And yet, that is not an unusual amount for a mortgage in many parts of the country.  And yet these same people claim they will never be able to save up a million dollars by retirement.   But they will pay nearly half that much in interest, over time!
And other folks will say, "Well, it makes no sense to pay off a mortgage or pay it down, as it is tax-deductible interest!"  But even if you are in the 35% tax bracket, it only means that you get back maybe $200,000 of this interest expense, over time, on your taxes.
Not paying $2700 a month (I've paid less than that for cars, for chrissakes!) means that I can put aside more and live on far less - two big pluses when heading to retirement.
"But," you say, "Everyone needs a place to live!  You have to have a mortgage when you first start out!"
And that is true.  But in my case, I didn't "need" a $350,000 mortgage so much as I ended up with one.   I started out with a $180,000 mortgage and worked my way up - using home equity loans and refinancing to add to my debt over time (as housing values increased) rather than paying down debt.
This is a familiar scenario to many people - many of my friends and acquaintances - as they lived beyond their means then then paid for it all with borrowed money from phantom equity in their homes.
I was lucky, of course.  Or smart, or both.   I had equity in investment Real Estate that I could sell and pay off all this debt.  This meant, of course, having less "stuff" but it also meant being debt-free.
A lot of folks at my age and station in life are not so lucky.  Middle-aged professionals, making the six-figure salary, figure they are "doing OK" as they are making all their bills every month.  They owe the bank more on their home that they paid for it, thanks to refinancing.  And the term of their mortgage will extend well into their retirement years at this point.
They have to hope that they never lose their job and that their house continues to increase in value, over time, so they can sell it before they retire.
Debt is a trap - a huge trap.   If you are already in it, there is not much you can do.  But as someone who escaped from that trap by gnawing off their own leg, let me tell you younger folks to think twice before stepping in it.  You may not be as lucky as I was.
The economy will improve in the next 5-10 years, and interest rates may remain low.  It will be tempting, as your salary increases, to take on more debt for consumer toys, a larger house, or whatever.   And when the payments get to be too much, it will be tempting to "refinance" that debt in a home equity loan and then leverage yourself further.   This was the pattern for the middle class over the last decade.
Learn from the mistakes of my generation, if you can.   Debt is a deadly trap, and there is no easy way out of it.  The best thing you can do is avoid stepping in it.
Newer Post Older Post Home