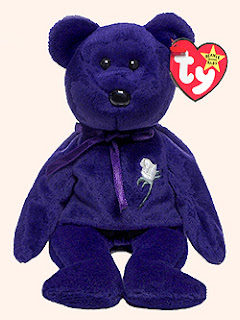 Nearly two decades ago, people tried to convince themselves that these ugly little stuffed bears were "collectibles" and would be worth thousands.   What makes people think this way?


Remember beanie babies and the hoopla surrounding them?   For some reason these mass-produced stuffed bears (made in China and Indonesia, the source of the cheapest things on earth) were thought to be worth a lot of money.  They came out in 1993, and within a couple of years, people were going nuts over them.

And as usual, it was the white trash and the poor who got sucked into this "collectible" nonsense.  These are the people who buy Franklin Mint crap and Elvis commemorative plates.
By 1999, the fad had ended, and production was halted.   From peak to valley, the fad lasted less than five years.

It is, alas, yet another example of poverty-think and one reason I am giving up this blog.  You just can't convince stupid people of common sense.

But I'll try:   A mass-produced item from China will never be "collectible" and it will never be "valuable" just because the manufacturer says it will be so.   In fact, any manufactured good can be replicated, once its value rises far enough.  You want a numbers-matching Hemi Cuda?  People can make one for you.  It is as simple as that.

And stupid little bears?  Be serious.

Even the Beanie Baby manufacturer is trying to throw cold water on this.  The "Princess Di" bear, arguably one of the most "collectible" of all of them, is worth maybe $50 to some weeping Mom who still misses the "People's Princess".  From the Ty website:

So, you would think that would put a little damper on this idea that a $10 bear is worth hundreds, or maybe thousands of dollars, right? 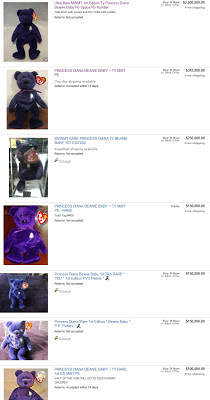 Pages and pages of these ugly bears are on eBay, often asking hundreds of thousands of dollars in price.  And yet there are literally hundreds for sale.  Not very rare, desirable, or collectible, are they? (click image to enlarge and have a good chuckle).


One of the listings says the bear is "museum quality" - but what museum, pray tell, would have such a thing?  The only museum I could find that has beanie babies is the Strong Museum ("the museum of play") in Rochester, New York, and then only because Ty gave them 700 of the damn things.  In white-trash fantasy world, museums pay millions for beanie babies, likely at auctions like Sotheby's.  But I digress.

But it is worth nothing.  Because it has no real function or use.  No one really wants to cherish it.  No one wants it for any real use that another stone couldn't be used for.  And even if they really wanted it, they really could just take another stone sort of shaped like it and chisel it into shape.   The earth has abundant resources and labor is cheap.

The beanie baby craze collapsed a few years after it started.   People who paid top dollar for beanie babies realized that they had been had.   I recall after the fad died, a friend of mine gave me a bucket of them which I sold on eBay for $1 to $2 apiece at the time.   They were just beanbag stuffed animals, nothing special, collectible or even interesting to look at, play with, or display. No one wanted them anymore - when months previous, they were highly coveted.   Human nature works that way - how interesting is that?

And the same thing has happened to other "collectibles" over time.  People lose interest, and more importantly, the media hoopla that hyped these "investments" is quickly forgotten.   Things that have no intrinsic value (or little intrinsic value) tend to lose their value over time.

But people like to think this way.  Someone tried to tell me that a clapped out old snowmobile was worth money because it was a "Limited Golden Anniversary Edition" - as if a set of gold stickers on the side of the cowling negated the seized engine beneath it.  The fellow buying the "Limited Edition" car thinks that somehow it is special or rare, compared to the base model, when in fact hundreds of thousands just like his, were made.

It is like that stupid "Antiques Roadshow" on PBS, where the yokels bring in some ugly old cuckoo clock or a chair that is so rickety no one can sit in it.  And the guy says, "Gee, this would bring $5,000 at auction!" which of course it wouldn't - he is likely pulling numbers out of his ass.   Most of the junk is so ugly it hurts your eyes.  But these specious appraisals make the yokel's eyes light up - as they are so in awe of money, but understand nothing about it.

The really fine antiques?  Yes, they sell for staggering sums.  You go to a place like Winterthur and look at the furniture there, and you realize pretty quickly the sad shit in your attic is really crap.  Either it was inexpensive furniture when it was made, or it is in very bad condition and not worth much - or it is not very old, really, and thus not worth a lot.   Keeping ugly broken junk because "it is old and worth something" is idiotic.  If you don't like how it looks or works, sell it.  Chances are, anything you get for it is a good deal.  Most antiques do not appreciate at a rate much faster than inflation.   Like collecting old cars, you are deceiving yourself if you think you will make money at it - unless you are a dealer of such items.

And yes, this same effect applies to gold as well - which I have written about before, at length.  Gold has value based on demand alone, and not any intrinsic value, other than as jewelry and for electronics, which makes up a minor part of the overall demand.   Most of the demand driving up the price of gold is from people hoarding it, thinking it will go up even further in value.  When that demand slackens, and people start to sell their hoards, what will happen?

Same thing that happened to beanie babies.   But like the brave lady (or fellow) listing the two million dollar beanie baby on eBay, there will always be true believers out there - convinced that values will hold, if not in fact go up over time - if only enough people believe they will.

A student filmmaker made this short video of his Father's $100,000 Beanie Baby obsession:

What is the compulsion to buy ugly little bears?
It is interesting to watch, as the obsession was about accumulating the dolls, not in selling them and making money.  And the wife talks about how weekends were spent inventorying and counting the dolls, and placing protectors over the tags, etc.   It almost sounds like an Obsessive-Compulsive Disorder.

It is also interesting to see that the wife is in a kitchen with granite countertops, tiled walls, and a Keurig coffee maker.   These folks spend a lot of money.   Whether they are truly broke?  Well, I guess they'll find out in retirement.
Newer Post Older Post Home