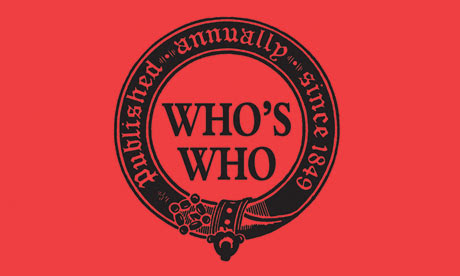 There is a real Who's Who that lists all the names of the beautiful people.  You are not among them.


I got another telemarketer call.  The telemarketers have realized that the "Do Not Call" registry is about as effective as a restraining order on an abusing husband - and they have given up all pretense of even trying to obey the law.

But, like Police Tape, this does help the consumer.  You should assume that any unsolicited phone call is for a scam, just as any unsolicited e-mail or regular mail entreaty.  If someone calls, e-mails, texts, or mails you, asking for money, just assume it is fraudulent, period.

I pick up the phone and I say "hello" and there is a pause.  Usually this is a good time to just hang up, as that pause means a computer robodialer has detected your voice and is connecting you with a telemarketer, probably offshore.

After a short pause, some clicking and beeping, a foreign-sounding voice says, "Mr. Robert Bell?" and I say, "Hello" and they say, "may I speak to Mr. Robert Bell" to which I say, "Speaking".     Since slammers and crammers often try to get you to say the word "YES" over the phone, it is a good idea to avoid saying that word on the phone, as they will record it as use it as "evidence" that you consented to a $50 a month calling feature.   Well, at least they used to do that.  Today such scams are less common, but not obsolete.

I asked, "Who is calling please?" to which she kept saying "Mr. Robert Bell?" which is another sure sign of a scam, as people who don't immediately identify themselves on the phone are usually con artists.

Then comes the real tip-off, "How are you today?"

Telemarketers always start off with this phrase, as it disarms the listener.  "Fine, thank you" is what you are trained from birth to reply.  You have to avoid this urge and say, "Who is calling, please?"

She finally says, "I am calling from Who's Who, and we want to confirm your entry in this year's edition..."

I tell her she is violating the Do Not Call Registry, and she replies, "Well, this is a confirmation call, and...."

But I had hung up by then.

What is Who's Who and what is this scam?   I was prompted to write this as when I mentioned it to Mark, only five years my junior, he said "What the heck is Who's Who?"

What the heck, indeed.   Back before the turn of the Century - and the previous one as well - there were books like Burke's Peerage and such, where the "important people" were listed in a big book, and if you were someone, you were written up in it.   Who's Who was one of these books, and over the years, it has expanded to include celebrities, businesspeople, and the social set.   If you were in Who's Who back in 1967, you were important!

Of course, the Internet and Social Media have changed all that.  Today, nobody reads Who's Who.

And by that, I mean the real Who's Who.  Since those days, a number of fake ones have sprung up.  And those are the ones that call you on the phone and ask to "verify" your information.  The lady who called me was not from the original Who's Who, but was from one of the knock-off versions - or could have been an utter scam artist entirely.  We'll never know.

For people of my generation, I guess, the term "Who's Who" still might resonate, although I think the term is pretty dated in this day and age.

The scam is simple.  And by "scam" I don't mean they are committing any crime - far from it, they are too clever for that!  Rather, they just take your money and give you something that I believe is of little or no value in return.

They call you up to "confirm" your listing in Who's Who, and then ask for a lot of personal data.   For a nominal fee, they say, you can have an "expanded biography" in the book (which no doubt is online these days).   People who are narcissists (and we all are, to some extent) fall for this and cough up $25 to $250 or more, just to make themselves famous.

And just like the poetry scam, the company might actually publish such a book.  Since the title is in the Public Domain, they can publish "Who's Who of Lawyers" or "Who's Who of Doctors" or "Who's Who of  College Students" or whatever.   So long as at least one copy is published, or it is put on a website, they can claim they are fulfilling their half of the obligation.  And usually they do sell copies - to the people who paid to get into it!  So it is not illegal.   It's just a stupid waste of money and ego-stroking.

It is not a good value - and in that regard, I consider it a scam.   But like most good scams, it preys upon the greed of the mark - that you want your name in lights so badly, that you will pay for the privilege.  And like most excellent scams, the mark, once they realize they have been had, will be too embarrassed to tell anyone about their foolishness.  Secrecy is the con artist's best friend!

Of course, there are "legitimate" books out there that do similar shakedowns.  Martindale-Hubbel, for example, has a listing of all the lawyers in the country.  I'm in there, and no, I would not pay for an "expanded" listing.  (I saw a physical copy in a junk shop the other day, there I was, listed in Alexandria, Virginia).   But if you are a Lawyer, they will call you and ask if you want an "expanded biography" published, for an extra fee, of course.  No thanks.

In a way, it is like the yellow pages - there are so many of them today.   You get a listing for free, but those full-page ads are not cheap.  And like the yellow pages, I think these sorts of books are a poor source for leads of any source, and a poor investment for a businessperson.   No one uses the yellow pages anymore.  And the best leads are from referrals from real live friends (not online review sites!) not advertisement books.

Sadly, some folks don't get this.  I have seen resumes with "Listed in Who's Who of College Students!" on them.   This is not really a credential, and likely, it will be one reason your resume gets tossed in the garbage.  "Clueless sod!" the HR manager will say, chuckling softly, as your crumpled resume and cover letter bounce off the edge of his wastebasket....