I'm Better Than You! 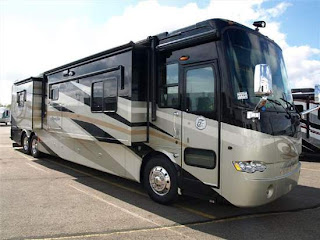 Hard to believe that people would brag about an RV, when so many other people consider them to be, well, white trash.


Mark had an interesting experience on Rich People's Island the other day.  We call it "Rich People's Island" as a joke, as the people who live there only think they are rich, as most are merely middle-class, and in fact many are in debt up to their eyeballs.  It is next door to Really Rich People's Island, and yea, half of those people are bankrupt as well and their homes in foreclosure.

But hey, they certainly put on a good show!

Anyway, this lady he was talking to spend a half-hour trying to impress someone she didn't know.  Mark was introduced by a friend, when she mentioned she had visited our island.  The conversation went something like this:

Lady:  "So why do you live there, instead of rich people's island?"

Mark:  "Well, it is very quiet and not as crowded."

Lady:  "We went there once, it was so dreary!  I couldn't imagine living there!"

Husband:  "We have a forty-foot diesel pusher!"

Lady:  "We never stay at anything but a high-end resort!  We don't camp!  If there isn't a swimming pool and a tennis court, I'm not staying!"

Mark:  "Well, that's RVing, I guess.  Staying at a resort one night, a Wal-Mart parking lot the next!"

Lady: "I never would stay at such a place as Wal-Mart!"

Husband:  "Not since we bought our house here.  It's been in storage a year, now.  Say, honey, we should probably put it up for sale this weekend, right?

Lady:  "Not this weekend!  We are going to a friend's house.  Did I mention they have a large home here on the island!  It's very large!"

Lady:  "Oh, I can't remember exactly where.  They showed us, of course.  They are very important people here on rich people's island and they invited us to their home!"

The conversation went on like this for a while longer.  It was pretty shallow stuff - not enough to get your ankles wet.

What was interesting to me is that they have a motorhome that they paid $250,000 for, and likely is worth half that right now.  And yet it has been sitting in storage in the hot sun, depreciating, for a year now.  I suspect they are "upside-down" on it.

What was really fascinating to me was that this lady was so obsessed with making an impression on a store clerk - someone she hardly knew and would not know for more than the length of the conversation.   But she had to "win" - and show that she was wealthier and more important.

And yet she failed to realize that she was talking to a Millionaire.

And likely, she and her husband were still in debt, not only for the motorhome, but for their house on "Rich People's Island" which actually can be rather inexpensive, particularly if you buy a land-locked home hurriedly made of vinyl and stucco, back in the late 1990's.   In fact, despite its reputation, "Rich People's Island" has some real hovels and shacks - and a crime rate to go with it.  It is very odd.

Status-Seeking.  It is ridiculous behavior, yet we all do it, to some extent or another.  Yes, all of us, even you and me.   We all like to think we are "better" than others, whether it is by dint of wealth, sophistication, moral values, political views, taste, or whatever.   It is about as human as breathing.

Perhaps it is our innate urge to say "I am important!  My life means something!  I am somebody of consequence!"   We all want to think our lives have deep and rich meaning, when in fact, even the most famous of us will find fame a fleeting thing.

My Mother harbored these sorts of illusions of grandeur.  She always said she wanted to write the "Great American Novel" but was never able to put pen to paper.  And likely this was because she had no story to tell.  Or the stories she had to tell, she was embarrassed to tell (usually those are the good ones, consider the greater body of English Literature, or any episode of Seinfeld).

And sadly, or should I say inevitably, she died and few will remember her.  Most of her friends are dead and once all of her children and grandchildren are dead, no one know she existed.  In fact, perhaps her only lasting legacy will be my words written here, preserved on the Internet for all eternity.  Sorry, Mom!

But the same will be said of me as well.   I am as insignificant as a grain of dust, just like most people on this planet.  If my name is remembered in 50 or 100 years, it will only be because I am listed on the United States Patent Office database on a number of Patents, as Patent Attorney, Agent, Examiner, and yes, even Inventor.  In fact, my stature as co-inventor of Beerbrella will likely be what I am remembered for, if at all.

And that is just fine with me.   Life is for living - and enjoying.   Enjoy the here and now and enjoy your own life - don't compare yourself to others.

Trying to find fame - which is largely imaginary - or judging your life based on comparisons to others, are exercises in futility.  No matter how important you are (or think you are) chances are, there is someone more important and famous than you.

Status-seeking is a dead-end.   And it is an expensive dead end as well.
Newer Post Older Post Home