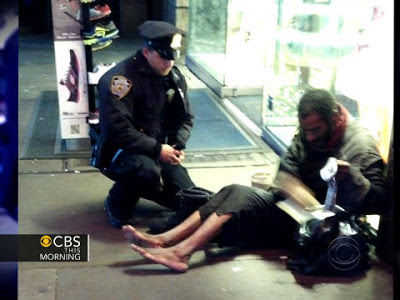 Give a man a pair of shoes, he has crack money for the night.  Teach a man to be a cobbler, and, well, he'll likely still be unemployed and homeless.  Particularly if he has mental health and drug problems.

"And the LORD said unto Cain, Where is Abel thy brother? And he said, I know not: Am I my brother's keeper?"  Genesis 4:9 King James Bible (Cambridge Ed.)

The key to understanding this quote, is to understand the context.  Cain had just murdered Abel, and God was saying, "Hey Cain, wassup?  Where's your bro?" knowing full well what had transpired (God sees all, right?).  He was just messing with Cain.  Playing him.
For some reason, Christians take this out of context (a murder scene) and make it into a parable about how we are all suppose to help one another.  And I guess not murdering people is probably a good start, at least for Cain.
The Bible, particularly the Old Testament, is fully of fucked-up stories like this.  God commands Abraham to kill his son, and then says, "Just kidding!  I was testing ya!  Ha-ha!  Oh, wait, you didn't actually go and do it, did you?"
It amazes me that people look to this nonsense for "guidance" on anything.
Yes, we should all be kind to one another.  And we should offer people who are "less fortunate" a path upward, even if their lack of fortune is due to their own malfeasance, poor choices, or intentional self-destruction - which it often is.
But being "kind" is just that - being kind, not evil.  And when we are altruistic for selfish reasons (so we can proclaim our good deeds to others and enhance our own self-worth) we are not being kind at all.  And bombastic columnists, who declare their own self-righteousness and decry the acts of others, fall into this category.  "Look at me!" they cry, "I care about the less-fortunate!   I wrote a column condemning those who don't care as I do!"  They do so much, yet we don't appreciate them.
And if our "kindness" allows a drug addict to remain a drug addict, is it really kindness?  If you hand $20 to a "homeless" person, chances are, they are going to buy alcohol or drugs with it, not food and shoes.  Are you really being kind, or just handing him a loaded handgun?
A better approach is to donate your time or money to a homeless shelter or other agency that helps people move from poverty - not enables them to remain in it.   Most homeless shelters provide resources for the homeless to pull themselves up from the gutter.  But they also have rules - strict rules - on behavior.  And that is one reason many homeless people prefer the streets, unless it gets really, really cold.  No one will tell them they can't do drugs on the street, or stop them from stealing from one another, or shouting obscenities at passers-by.
And sometimes, that is the ultimate kindness - being firm, setting boundaries, enforcing rules.   It is a kindness sorely lacking in our culture today.
UPDATE:  It is now reported that this "homeless" man has an apartment in the Bronx, paid for by the VA.  And likely he qualifies for food stamps, an "ObamaPhone", medicaid, and a host of other benefits.
But of course, we cannot "afford" to institutionalize the mentally ill, right?
And of course, income from begging is not reported income, so it does not affect your qualification for other benefits.
I hate to say it, but we are enabling a lifestyle here - making it easy for people to make bad choices.
Newer Post Older Post Home