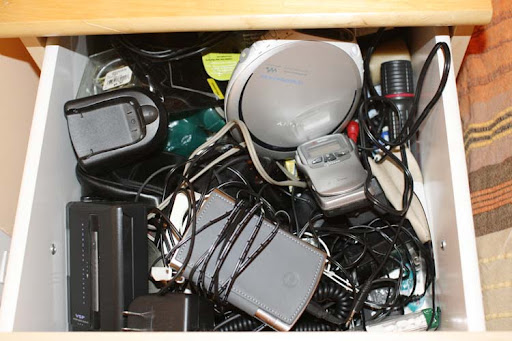 Eventually, every electronic device you buy ends up in a drawer, somewhere, obsolete, outdated, and unused.  Keep this in mind before you get excited over the latest new electronic toy.


Getting old is a little sobering and sometimes not as much fun.  After 53 Christmases, the excitement and mystery of the holidays starts to evaporate.  Doing the same things over and over again loses its appeal, at least to folks who think now and again.

And consuming things starts to get old as well.  Buying a car is no longer viewed as some special treat, but rather a dreadful process filled with loathing and anxiety.  After all, it is a lot of money to spend, and you'd rather just keep it in your bank account anyway, right?  And suppose you make the wrong choice?

Electronic toys lose their allure entirely.   After you've torn open the box on some electronic piece of shit for the 1,000th time, tossed the instructions, ate the desiccant pack, and plugged in the wall-pack transformer, well, you get bored.

And the fact that you have a drawer-full of last year's model of electronical crap sort of takes the edge off of it.  To a sixteen-year-old, getting that first smart phone must be real fun.  All those new features and stuff to try out!  How cool is that?   But at my age, well, it is just another piece of shit I have to deal with.  And likely I will have to manually transfer over all my data to it, and I will never understand all the features of the device until about two months before I throw it away for good.

But as depressing as that all sounds, there is an upside to all of this. Not being enamored of technology means I don't squander as much as I used to, accumulating it. When I was young and poor, having the latest technology meant more to me - and I was willing to go into debt for it.   When CD players first came out (yes, I am that old) I went and bought one - a Sony for the modest sum of $300, which was a lot of money in 1985.  The year before, they were over $1000.  And CDs were $14.99 apiece back then, too - which would be like $45 today.

But I had to have one - it seemed important at the time.

I hardly could afford that, but I thought I could, and moreover that I "needed" this luxury in my life, as I was so "busy" all the time, and having a phone for the hour-and-a-half a day I was in my car seemed necessary.

The reality was, of course, while it was "handy" on occasion, for the most part, it was just a status symbol and a way of showing off wealth.  And it was exciting, I think, to try new technology which at the time seemed like science fiction.

You may think cell phones are pretty passé today, but imagine how I felt, back in 1989, getting a dialtone in my car!  It was like anti-gravity had been invented.  Before then, only Presidents and heads of oil companies had car phones.   I still remember making that first phone call - how electric it felt.  I think I called my folks and tried to explain to them I was calling from my car.  And they didn't understand it.  Was I calling from my garage or something?

So I guess that is part and parcel of being in your 20's.  All this electronic shit seems so cool.  And I am sure that the first iPhone you bought seemed really cool, as you could do all these "apps" and shit.   But after a few years, people expect this sort of thing and the novelty wears off.


And before you know it, that piece of technology you bought - and were so excited about - is now in a drawer somewhere, gathering dust.  It was a big deal the day you bought it, but now it just seems, well, like so much junk.  And while the upgraded model you bought might be nicer, the excitement of getting it just wasn't the same, was it?  In fact, by now, it starts to seem like an expensive pain-in-the-ass that it is.  Some new "features" you have to learn, and of course they changed how it works, so when you press the button to save someone's name in the directory, it erases it instead.

And after a few decades, you realize that the electronic crap in your life basically lasts only a few years, before it becomes woefully obsolete.  My first real PC (which I borrowed money to buy) ended up in Dumpster, only five years later - or sold for a few dollars.   And yet when I got it, it was like, whoa!  Color monitor, dude!  VGA no less, all 15" inches of it!  And check it out - a hard drive   40 MB - suck on that!

Today, that first PC I bought would hardly run my calendar program on Windows.  And perhaps this is a problem for the electronic industry.  Because if I feel this way about electronics, then I suspect many other people do as well.  And given our aging demographic, perhaps more and more people will start to turn away from electronic gadgetry.

Maybe.  Maybe not.  All I can say is, I am not excited about smart phones, iPads, or any of this crap.  The people I see with them, seem like very unhappy and stressed people - constantly fidgeting with then and checking them, all while talking to you.

And if you even try to have an e-mail conversation with them, it is like "Wassup?" and not much else.

Recently, I met some 20-somethings who are just getting started out in life.  It is nice to meet younger people, so full of hope, naivete and whatnot.  But trying to communicate with them is impossible.  They want to text from their iPhone, and I like to e-mail or talk on the phone.  It is a generational communications gap.

And a lot of older people here on Retirement Island are buying smart phones or texting plans, simply so they can stay in touch with their children or more specifically, grandchildren.   Because the grandchildren can't write a five-line e-mail and get nervous talking on the phone.

It is like someone invented a new method of communication and forgot to tell us old folks about it.

I dunno.  I will be dragged, kicking and screaming, in to this new era of Twittering and Twattering and Texting and crap.   And the reason why is simple:  I don't want to spend the money on more electronic crap.

Electronic crap - that will end up in a drawer somewhere.