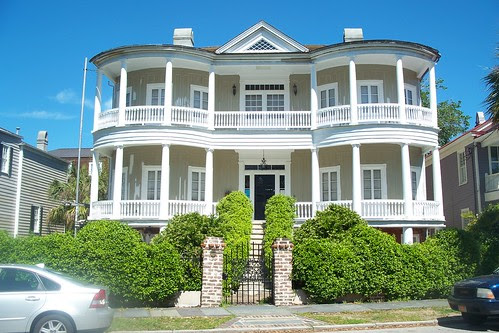 A beautiful period house in Charleston is a thing to behold, but do you really want one?

We sort of crashed this lovely party at a house in Charleston the other day.  I believe it was even at the house in the picture above - I don't know, it was dark and I was feeling no pain at that point.   Nice folks in Charleston, and they have nice houses there.  And it was fun to look at them.  But no way in hell would I want to own one.

Even if given to me free and clear, I could not afford such a house.  Why is this?

Well, one thing we forget is that houses like that, back in the day, belonged to fairly wealthy people.  And moreover, you could hire servants and laborers back then for pretty cheap.   So the chores of just keeping a place like that clean, mowing the lawns, and tending the gardens, was done by an army of servants and laborers.

And that is just regular maintenance.  We forget, in this era of vinyl siding, that wooden houses need to be painted, nearly every year in some climates.   We saw one neighborhood, down by the Battery, and it seemed that every house had a painting truck in front of it.  Like the Golden Gate Bridge, once a crew has finished painting a place, they can basically start right up again, as the house will likely need another coat at that point.

If you are a wealthy merchant in the 1800's, you could afford to own a place like this.  You had servants - even slaves - at your disposal, to clean, paint, maintain, repair, garden, serve, and do all the things such large houses require.

Today?  The cost of hiring people at minimum wages would be staggering.  And the costs of insurance and property taxes, as I have noted before, are staggering as well.  And of course, for an historic house, even the mildest of renovations requires zoning approval - and expensive hand-made woodworking.   You ruin the value of such a home if you don't maintain it - and maintain it to period standards.

Most of the folks owning such homes have a lot of money, or appear so.  Our gracious hostess that evening (who invited us, we really didn't crash it) appeared to have the money to keep up such a lovely home, as it was in immaculate condition.

But others struggle to do it all themselves.  And we met people who owned such homes and, while they were beautiful, were a form of a trap, in some ways.   As owner/maintainers, they had to do all the gardening work, the cleaning, the painting, the repairs, and the like, with only occasional hired help or contractors for some of the bigger jobs.  As a result, they end up slaves to these houses, which is ironic when you consider slaves maintained them back in the day.

It drove home to me that there are a lot of things in life that I appreciate and enjoy, but are things that I never want to own in my lifetime.  Short of being a lottery winner, they simply are not affordable.  And even if affordable, managing the teams of laborers to maintain such a place would be a full-time job in and of itself.   You have to really love it, or just forget it.

You are better off renting such a place for a weekend or a week, and helping the homeowner with their property tax burdens.  You can enjoy the home, and then walk away without worrying where you are going to get someone to repair your soldered copper gutters.  And in places like Charleston, there are plenty of places to rent (not the house shown above, of course).

There is a corollary to this effect in the proliferation of the modern "mini-mansion".  Many people, during the last decade, decided they needed huge houses - thousands of square feet with dozens of rooms.  Often five or more bedrooms and a corresponding number of baths. Huge kitchens and upscale appliances.  They sound so fun and wonderful until you realize that someone has to clean it all.  And now you either become a house-slave, if you are just a middle-class schmuck, or you end up hiring illegal aliens to do everything, and then under-funding your 401(k).

And when the mini-mansion gets older, well, it gets ugly, fast.  Unlike the beautiful cypress and heart-of-pine homes in Charleston, the modern mini-mansion is slathered in cheap stucco, and it often falls off over time, particularly if not installed properly.  Suddenly, your "dream home" has turned into a maintenance nightmare - with escalating repair costs.  Usually at about the ten-year mark is where such homes show their flaws.

We live in a different era.  And much has changed since the mansions of yore were built.  The abolition of slavery meant that many folks could no longer keep up such places.   And sadly, many were turned to apartment buildings or even torn down, in the early 1900's.   The imposition of the income tax caused many more to be sold or torn down.

Simply stated, today it is very hard to live like a robber-baron or plantation-owner of old, although many are still trying.   But before you decide you want an historic house in Savannah, Charleston, or Old Town Alexandria, think about the cost of just the simple maintenance on such a place.

Will you own the house, or will the house end up owning you?

At this stage in my life, based on my income and savings, as well as my life goals, the answer is clear.  I would rather own a small and simple house or apartment, and have more time to travel, work, and play.  I would rather have money in the bank and a low maintenance home.

I will enjoy appreciating other people's fabulous homes, either from the sidewalk, or if I am lucky enough to be invited in, from the inside.

But I don't want one.  Nosirrreee!