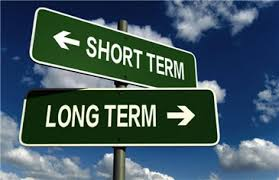 Investing for the long-term is the best strategy for the small investor.