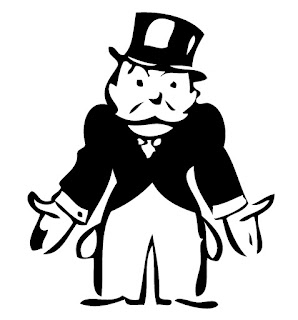 Bankruptcy is a common event in the business world.  It is part and parcel of doing business, which is why it is codified into law.


A friend of mine gave me a stack of old car magazines that dealt mostly with the Brass Era Automobiles, built prior to World War I.   Cars of that era were huge, heavy and expensive, and the brand names are largely unknown today.

What is fascinating about reading these magazines is how many of the car companies of that time came and went with regularity - being capitalized, going into business, going bankrupt, being re-organized, merged, and finally liquidated.  It is estimated that there were over 1,000 manufactures of automobiles in that era - of one sort of another.  Many of these makes are ones you never heard of - the Detroiter, for example, whose massive factory no longer even exists.

In any new industry, there are bound to be a lot of competitors, and a few will end up as major players.  By the end of the World War I, the car market in the United States had already started to coalesce into Ford, GM, and everybody else.  By the end of the Depression, the field had been winnowed further.  By the mid-50's, it was the "big-3" and American Motors.  By the 1980's, we were down to the big-3.  Today, these three still soldier on, but historic brands like Mercury, Plymouth, Pontiac, and Oldsmobile have bit the dust.

And this is not an uncommon trend.  If you look at the early days of oil exploration or the railroads, you see a similar pattern.  Many jump into the business, determined to make money.  Only a few succeed, and often these end up buying out the others, merging together businesses.  The strong survive, the weak fail.

The airplane business started out the same way, with a number of competitors, including Wright, Curtiss, Boeing, Douglass, Grumman, Convair (itself a merger of two companies) and the like.  Today, we have basically one larger passenger aircraft company in the United States, and two military builders.

The computer business was the same way - both for mainframes and PCs, with the latter eventually eclipsing the former.   In the early days of mainframes, there were a number of makers, but the market quickly settled to two or three makers - IBM, Control Data, Digital, etc.   The PC market had a number of operating systems and types, but by 1985 had settled to MS-DOS and Apple types.  And by 1995, the number of PC makers had dropped as well, to the handful we have today.

What struck me about this is that there was a lot of wailing and moaning on the Right about alternative energy companies - such as Solyndra and A-123, which have gone bankrupt.    By the way, if you want the real engineering reasons why Solyndra went bankrupt, you might want to read this link.   While a startling and innovative design, the Solyndra tube was just too expensive to justify its purported advantages.  And while cheap Chinese solar panels may be the stated cause of its demise, Solyndra was likely doomed to fail in the long-run, as its esoteric technology could not compete with flat-panels made in the United States.

In any emerging technology market, this is not to be unexpected.  And even the alleged malfeasance at Solyndra (misrepresentation of earnings) has its parallels in the early railroad, oil, and automotive booms, where companies sold stock, had high expectations, and then went bankrupt.  In many cases, people experiment with new technologies, or can't get costs under control, and they fail in the marketplace.  If they succeed, they leapfrog the competition.  If they fail, well, you end up with the Vega engine.

Of course, as others will be quick to point out, the main difference between these alternative energy companies and start-up industries of yore is that the government gave loan guarantees and in some cases, money, to these companies.   But of course, other industries benefited from government subsidies in the past.  Railroads would never have gotten off the ground without rights-of-way.  Boeing benefited from military contracts in developing the 707.

And it doesn't end there.  Federal subsidies for coal and oil businesses go way back - and continue today.  Timber subsidies and cattle subsidies exist in the form of cheap leases of vast Federal lands.  The Nuclear Industry would never have gotten off the ground, without Federal research and subsidies.  And of course, we "pick winners" in the farm business every day by propping up prices of corn, milk, sugar, and a whole host of other products, as well as by providing things like ethanol mandates.   If you really believe the USA is a land of "Free Enterprise" you need to look around more carefully.

This white paper details the subsides just to energy businesses alone.  It is pretty startling, and you realize, reading it, why the "big coal" and "big oil" people are making a big noise about Solyndra. 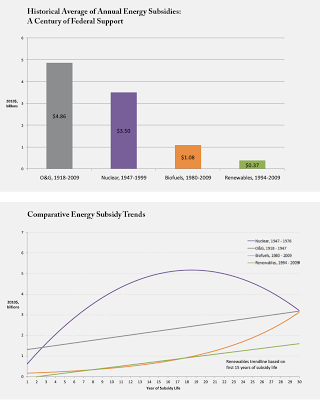 This chart illustrates why the oil industry is against renewable energy subsidies - it cuts into their take!

Solyndra appears to be out of business for good, with a successor company being formed only to take tax write-offs from the losses of the parent.  And while this may have been a bad bet for the administration, the overall amount of money involved, compared to the annual budget, is trivial - a tiny fraction of a percent.   To hear the right call it, the bankruptcy of Solyndra caused our current economic crises.

But that is an effect we see in every discussion of our budget - people fixate on trivial things, like Sesame Street or the cost of Congressional salaries, while ignoring the elephants in the room - Social Security, Medicare, Defense Spending, Welfare - which combined make up about 3/4 of the budget.

The A-123 bankruptcy is a little more troubling.  The Chinese are buying it for a relative song ($256 million) which is a bit of irony, as government money helped develop the technology, plant, and infrastructure.  In other words, we've given away the store here.  A-123 has firm contacts from several car companies for their battery packs - as well as military contracts.   With a lower operating cost and overhead, it certainly could be a going concern.   Unfortunately, it looks as though it may move offshore, and that gain would end up being a loss.

Usually, these sorts of bankruptcies can often have a jump-starting effect on the economy.  After the tech crash of the 1990's, there was a huge amount of server and network capacity available at bankruptcy auction for pennies on the dollar.  If you wanted to start a new company, you could find office space in Silicon Valley at bargain prices, and office furniture for bubkis.   This alone allowed a lot of companies that never would have made it, under ordinary circumstances, to succeed.

And mergers of various companies in any industry usually have the effect of lowering overhead costs by increasing overall volume production, and of course, limiting competition.   Bankruptcy is a normal process for any developing technology - it is the natural selection of the business world, and only the strong or ruthless survive.

Battery technology has leapfrogged in the last few years - making hybrid and electric cars more practical than ever.   While not everyone is ready for an electric car, the range of existing cars has nearly doubled, compared to their lead-acid battery forebears.   And while the Chevy Volt might not survive long in the marketplace without subsidies, the Toyota Prius has demonstrated that a hybrid vehicle can find a market, in the U.S. and worldwide.  Long-term, we will benefit from these successes - and even the failures.

I am puzzled as to why this technology hasn't moved to other areas of the marketplace.  While the Lithium-Ion battery is popular in cell phones and laptop computers (the latter being the initial application for the devices), plain old D-cells still power my flashlight, and my car battery stubbornly remains a lead-acid type little changed from the brass-lamp era.   One would think a Lithium-Ion car battery could replace your lead-acid starting battery at 1/10th the weight and size.   One would think, anyway.

What is also puzzling is that despite this flood of "cheap Chinese solar panels" into the United States, that solar panels for home use are still staggeringly expensive and are not proliferating across the country - just yet.    Installation of such panels is still expensive, and the payback is measured in years, if not decades.  And the practical problems of sunlight access and storm and tree-limb damage have yet to be addressed.  A panel on my house would not get much sunlight and likely be shattered by a falling tree limb in a matter of months.

But, overall, the money spent on these experiments is not necessarily money flushed down the toilet.   Even if the electric car turns out (yet again) to be an impractical fantasy, and if solar panels still remain too expensive for regular energy generation, the trickle-down effect of improvements in technology will be felt - just as the Moon landing ended up jump-starting a lot of technologies on Earth.

And that is the nature of Engineering.   You set out to solve a problem, and end up spending a lot of money on false starts and failures.   And you learn from failure more than you do from success.  Before there was an iPad, there was something called the Apple Newton.   Before there was an iMac, there was something called the "Lisa" which was an utter failure.  And yet, Apple probably could not have made their successful products, without first experiencing these utter failures.   You learn, from failure, not only what works, but what doesn't.  You learn what the market wants, and what it doesn't.

And that is why, I guess, as an Engineer, I am not surprised or worried about the bankruptcy of A-123 or Solyndra.   It is to be expected, in any emerging industry, that most of the companies entering the business, will fail.   And right there is a good reason not to invest in emerging technologies, as "picking winners" is very hard to do - even if you are the Federal Government.   Of course, the Federal Government can easily swallow a billion or two on some ill-conceived scheme.  You and I, on a personal level, really can't.
Newer Post Older Post Home