The Age of Disbelief 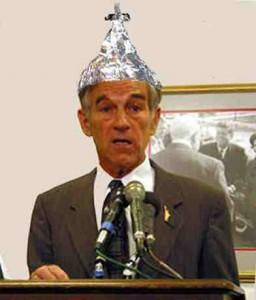 Given our technical sophistication, you might think we live in an age of reason.  But in reality, today is an age of disbelief - more than ever.   Most people live in an alternate-reality or fantasy-world.


According to a recent article, folks in France have blocked access to a mountain, as some new-age freaks posted something online that this mountain would be a "safe zone" during the end-of-the-world on December 21, 2012.   You see, that is the end-of-the-world as predicted by the Mayan Calendar, and if you go to this mountain, a big spaceship will pop out and save you.

No, I am not kidding.  Adult people really believe this.

But that is just the disbelief du jour.   There are plenty of other crazy stories that people believe in - including most religions - and today people are taking religion to scary new places.

When I was a kid, being a Christian had more to do with the teachings of Jesus than anything else.  It seems axiomatic now - being a Christian means following the teachings of Christ.   And for a guy who wore a sheet and wiped his ass with his hands, Jesus had a lot of good things to say, as opposed to his predecessors, who just wanted to kill or enslave everybody.    You know, that love thy neighbor stuff and all - as opposed to eye for an eye.

Today, though, so-called Christians - the hatey-kind - are digging through the dregs of the old Testament and a crazy book called Revelations (which was apparently written by a schizophrenic old Jew) to turn Christianity into a creepy pagan superstition.   These folks spend hours divining the meanings of Leviticus - picking and choosing the parts that fit their world-view, while ignoring the bits that conflict with modern living (swearing, eating lobster, enslaving people).

And then they look for "signs" that the "end times are nigh" and prepare for some end-of-the-world holocaust.

My, how Christianity has changed, in just 40 short years.  Jesus is no longer the reason for the season - Apocalypse is!

But the list goes on and on.  UFOs, Conspiracy theories, 9/11 Truthers, Ghost Hunters, you-name-it.  And the cable channels that once touted science and discovery and showed nature films, are now catering to this new normal of para-science.

What is odd to me, as an Engineer, is that we also live in this high-tech world of semiconductor microchips and home-built spacecraft.   We have split the atom down to bosons, and yet people still believe in ghosts and angels - in their daily lives.

And this goes beyond mere weird spiritual beliefs, too.    People forward e-mails to one another, documenting the latest outrages of our government or our Negro President, without bothering to check whether these things are really true or not.   Welfare recipients are all getting free Obamaphones!   Well, not exactly.  And no, it wasn't Obama who started the program, but Ronald Reagan.

They have television shows spouting conspiracy theories.  Jesse Ventura supposedly documented the "internment camps" that Obama was going to use to round up dissidents, after the election was over.   And I've met people who really believe this, too!

It doesn't matter if they are true, only if you believe them to be true.

Why do people believe what they want to believe as opposed to seeking out real truth?  And is this a trend that has accelerated in recent years, or one that is constant?

It is easier to buy a narrative that says you are a victim - of the government, big business, welfare queens, take your pick.   And the Left and the Right both play this game.  If you are a Liberal, you posit yourself as a victim of Wall Street.  If you are a Conservative, you posit yourself as a victim of Big Government.  And both extremes will tell you that the reason they underfunded their 401(k) were these big trends that were beyond their control.   It is all someone else's fault!

The reality is, of course, that people of all political stripes, myself included, make poor financial decisions and spend money on junk we don't need.   It is human nature to goof off now or want now, and pay for it all tomorrow.  So we go into debt, we fail to save, and we end up paying the piper.  And we don't want to look inwardly at what we did wrong - when so many people out there are selling excuses that you can just try on and wear.

So the folks who bought the mini-mansion who later lost it to foreclosure are not stupid for buying a house they cannot afford - they are victims of the Bush economic bubble or the Obama welfare state - take your pick.  Either excuse is as equally as lame.

So it is human nature to believe in stupid shit - that faeries will grant magic wishes and that Leprachauns have a pot of gold - that is for sale by Glenn Beck!

But what about the second question?   Are we becoming more unhinged in this day and age than in the past?   This is harder to quantify.   All I can say is, if you look at history, over time, a large number of people have engaged in wishful thinking or distorted thinking, for huge swaths of our history.

Just in the last Century, we had millions of people believe in silly things like Communism, Fascism, or Nazism, just as an example.  Millions of people really believed that country would do better with one guy in charge, provided he isn't totally insane.   Problem is, the guy in charge usually ends up being insane, nearly every time.

Yet people believed fervently in these -isms.  They fought wars over them.  They were willing to die for these "causes" that in retrospect seem pretty stupid.

Or take the hippie movement of the 1960's.   Young people actually thought we could "live together in peace and harmony" just by willing it to be so.   In the 1970's, folks thought you could do cocaine and it would actually enhance your life.   Today it is steroids, oxycontin, or methamphetamine.

Crazy religions, crazy cults - they have all been around a long time, or a predecessor religion or cult took their place.   Scientology is nothing new  - it has just progressed from outlier cult to mainstream religion, much as Mormonism has.   And both are based on some pretty fantastic stories - and by "fantastic" I don't mean "really really good" either.

Go back the the Century before and look at the attitudes of people then.   Folks fought a war over slavery - the very idea of which today seems, well, insane.   And yet folks would rationalize enslaving other humans, often using religion as a backstop.    And in terms of financial malfeasance, the various trusts and bubbles of the 1800's make today's Wall-Street shenanigans look like child's play.   And how could all of this have happened in the age of steam?   After all, with such high-tech machinery as the locomotive, could people really believe in ghosts and faeries?  You betcha!

Yet they did, and today they still do.   And perhaps that is because most people have little or no clue how their world actually works.   They don't know what a Higg's Boson is, so they read an article in a dumbed-down "science" magazine, calling it the "God Particle".    They don't know what goes on inside their smart phones or their flat-screen televisions, or indeed even in their automobiles.   It is all so scary and unnerving.

So, maybe it is easier to believe in disbelief.   One website out there basically claims that all of our science today is based on "captured alien technology" and YouTube videos abound with this sort of nonsense.   After all, we are just too darn dumb to build pyramids or microprocessors!  Thank God for those aliens!   We'd be beating rocks together without them!

So what is the point of this posting?  Simple.  Act rationally in an irrational world and you will get ahead.

And acting rationally means looking inward at your own life and examining what it is that you have done to affect your life, rather than looking for easy answers in spirituality, myths, conspiracy theories, or victim mentality.   God is not going to help you by praying to him - you have to get up off your ass and help yourself.

Similarly, if you want to believe that all your setbacks in life are the fault of someone else, chances are, you will continue to have setbacks, as you will never learn from your mistakes and failures.   This is not to say that other actors are at work - they are.   But in nearly every situation, you have some culpability in the equation.

A guy speeding in a blinding rainstorm spins out and whacks into my car.  Was I at fault?  Most people would say "NO" and when you talk to people about car accidents, they typically have this "He was at fault, I was entirely innocent" story to tell, even if they were the ones who ran through the crosswalk and crushed a gaggle of children.

But in looking inwardly, I realize that driving in heavy traffic in a rainstorm is very dangerous, not because I might wipe out, but because some other jackalope will likely plow into me.   Today, when it starts raining like that and people start driving too fast and too close together, I get off the road and park it until the traffic dies down and the weather improves.   I can't control the other drivers - but I still have control over my own actions and can ameliorate risk - even if I can't eliminate it entirely.

In your financial life, this is also true.  So many Americans today whine and complain about how hard they have it - sending me messages from their iPhones to that effect.  They are living paycheck-to-paycheck, can hardly afford to make the lease payments on their car and their minimum credit card payments!

It has to be someone else's fault, as having lots of debt and electronic toys is "normal" and they are entitled to that sort of thing.   But really, this is not the case.   If you want to get ahead in life, you have to accumulate wealth, not spend it.  And if you spend it, you have no one but yourself to blame.

Looking for easy answers is looking for the wrong answers.  Belief is a fine and wonderful thing for "answering" the imponderables in life - why we are here, what happens after you die, what is existance - that sort of thing.  It is a horrific thing to use in your daily life (as some religions suggest you do) for answers like "how much do I have in my checking account" and "how do I pay off this loan?"

We may be living in an age of disbelief, but you can take advantage of this by being a rational actor in an irrational world.