Are We All Being Pawned? 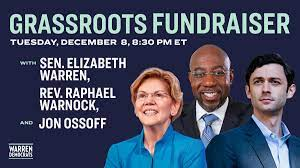 I am not sure how sending a politician or a lobbying group $20 is going to get a bill to pass Congress.

During the runoff election I sent a small donation to Ralph Warnock and to the other guy (whoops, that's not a good sign for his re-election).  Like most Americans (a clear majority, in terms of votes and Electoral College votes) I was tired of the constant calamity and stress that Donald Trump seemed to love generating.   It was just an exhausting Presidency.  All that damn tweeting!

Anyway, that got me on some sort of list (which they will later use to round us up) and I have been flooded with e-mail pleas and even text messages - four or five a day - warning that if I don't donate more money, some bill that is before Congress won't pass.  Or, they tell me to sign an online petition (slacktivism at its best) and at the end of that (or a survey) another plea for money.

And some of these organizations I am not so sure of.  The Sandy Hook Promise, I guess, is legitimate, but some of the others have odd sounding names and it is not clear who the organization is, and where the money is going.  K-Street lobbyists?  Staff salaries?  Yet more fundraising?

Again, I paid cash-money to get these clowns elected, now they just have to do their job.   They have a majority in both House and Senate, although the filibuster prevents them from steamrolling the Republicans there.  They either can pass legislation (financially, through reconciliation) or they have to learn to compromise with the GOP.  Or... just forgetaboutit, because it ain't happening.

But where does my money come into the picture?  This is not very well explained in their pleas for money, and I suspect that is by design.  Organizations take on a life of their own, and your worth to a political organization - and the value of the organization - is measured in how much money you can raise.  And with two-year terms, Representatives are always fund-raising for the next election.

So.... no, Ralph Warnock doesn't need $20 to pass a voting reform bill - odds are it will or will not pass, with or without my twenty dollars.  My guess is, that unless they can abolish the filibuster, it ain't happening.   But another $20 goes into his re-election campaign war chest - or something like that.

Of course, all the political parties and interest groups do this.  The NRA, flush with victory after victory in the war on common-sense, used gun laws in the UK and Australia to scare people into donating.  The argument was something along the lines that since these other countries have strict gun laws and the United Nations..... BAM!  They can bootstrap Australia's gun policy to the USA.  Never mind that the United Nations is a toothless joke that is just a place for third-world countries to grand-stand.   It worked, too.  Fear sells - but it is never an emotion to be trusted.

As any salesman knows, you have to instill a sense of urgency in the "prospect" to close the deal.   If the prospect in interested in the car, but wants to "think it over" you tell him that some other fellow was looking at it earlier today.  The message is clear - buy now! - because you know, GM might stop making cars or something.

So these political pleas are almost laughable with their sense of urgency.  They need my twenty bucks today, because if I don't contribute, I may wake up in a Nazi State tomorrow.  If the plea was from the GOP, I am sure they would raise the ugly specter of Stalin or worse yet, President AOC.  First they came for my guns - then my garbage disposal!

It makes me wonder, how did Democracy survive before I was on their mailing list? Pretty well, I'm guessing.  But it kind of turns me off from these candidates and politics in general.  These e-mails and texts tell me one thing, well, perhaps two:  First, they think I am stupid.  They insult my intelligence with the level of writing in these messages. Second, politicians are pretty much all alike.  They use "issues" to get elected and stay in office. I wonder if they actually care about them.

Some folks think that we should have "term limits" on elected officials, and fortunately, the folks who think this are usually from Red States and are particularly dense.  I've been treated to this a number of times - people who consider themselves sage politcal types saying things like, "Ya know, what we really need is term limits!" as if one thing could solve all our problems.  It never does.

All I can say is, you go for it.  Term limits for all Republicans! You see how that would work out. The problem with Reverend Warnock and whats-his-name is that as freshmen Senators they are not getting all the plum committee assignments nor the chair of the committees.  The GOP's biggest power-broker today is Mitch McConnell, who wields ten times the power of Reverend Warnock.  Funny thing, the term-limits people rarely call for him to step down!   Term limits for the other guy, not our guy.

So even if I send money to Ralph, I doubt it would make much of a difference.  Like Ms. AOC he's flavor-of-the month, the new kid on the block, and likely to be the least-effective legislator or at least one of the least effective. Again, sending him money accomplishes... what?

Maybe closer to election time, I may donate to a candidate or cause.  But right now?  What's the point?

Or maybe that is the point - there is no point, just a well-oiled money-raising machine.  And that is a very depressing thing to contemplate.

Democrats - please stop SPAMMING me!  You have all the charm of a stalker on Tindr!